Some would say I've been blessed with the opportunity of owning so many solid state drives. With the weak and uncertain economy very few people are willing to shell out a few hundred bucks for a small hard drive. Those who can afford the drives are now faced with the question of who to buy from. So many companies offer SSDs claiming to have the best performance out there. So who can you trust?

OCZ Technology has set a precedent by being at the cutting edge of technology. They challenged themselves to market a reliable and affordable SSD. Earlier this year the Indilinx Barefoot Controller was at the heart of the Vertex SSDs, a family of drives finally capable of providing consistent performance regardless of what you threw at it. Tonight, we have the OCZ Agility Series SSD. Building off the success of the Vertex, the Agility is what you could call a mainstream slightly more affordable version, still using the Barefoot controller of course.

The OCZ Agility comes in a colorful green package, very different than the colors I'm normally use to associating OCZ with. The package is slightly larger on all sides to properly protect the drive. A generic box is used and the packaging line applies the correct sticker based on what drive will be going inside. That will explain why the words ‘Agility Series 60GB’ are parallel to the edge of the box. The specifications listed on the back sticker provide insight as to how well the drive will perform. We should expect 230MB/s read, 135MB/s write and 80MB/s sustained write. I've never actually had a drive live up to all the numbers in all my benchmarks so we'll see how things go with the Agility Series. 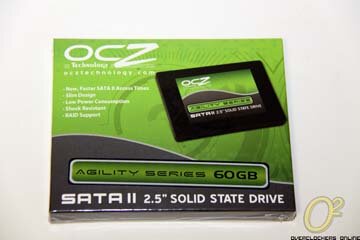 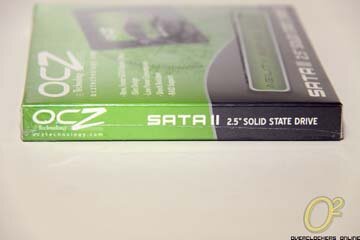 Inside the package we have a foam enclosure cradling the drive. A slip of paper details the installation instructions and warranty details. 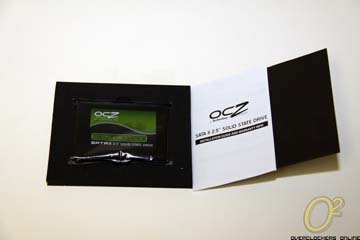 The 2.5′ drive looks no different than any other SSD I've seen. The generic cover can be distributed to any manufacturer such that their stickers can be adhered to the face for distribution. On the top side we have a large sticker indicating the Agility Series. On the back we have a slightly more descriptive sticker giving the capacity of the drive. A third sticker lists the product and serial number. 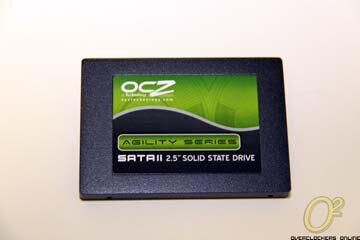 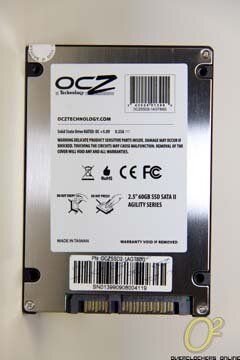 A clear indication that this is an Indilinx Barefoot controller drive is by the accessibility of the firmware jumpers on the back beside the SATA data and power cable. You won't find this with any Samsung controlled drive. 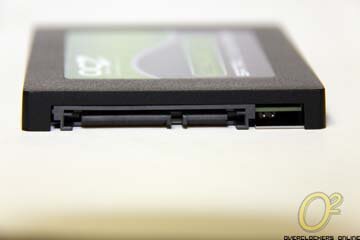 This wraps up the package and drive, let's take a quick look at the specifications and move onto installation and testing.

It doesn't take very long to navigate through the menus on OCZ's website to find the Agility product page.

Offering your system the incredible performance of flash-based storage, the OCZ Agility Series delivers the performance and reliability of SSDs at less price per gigabyte than other high speed offerings currently on the market. The OCZ Agility Series is the result of all the latest breakthroughs in SSD technology, including new architecture and controller design, blazing read/write speeds, and 64MB of onboard cache.

The OCZ Agility drives feature a durable yet lightweight alloy housing, and because OCZ SSDs have no moving parts, the drives are more rugged than traditional hard drives. Designed for ultimate reliability, Agility Series SSDs have an excellent 1.5 million hour mean time before failure (MTBF) ensuring peace of mind over the long term. All Agility Series SSD drives come backed a two year warranty and OCZ's legendary service and support.

IMPORTANT NOTE: Solid State Drives DO NOT require defragmentation. It may decrease the lifespan of the drive.

*Consumers may see a discrepancy between reported capacity and actual capacity; the storage industry standard is to display capacity in decimal. However, the operating system usually calculates capacity in binary format, causing traditional HDD and SSD to show a lower capacity in Windows. In the case of SSDs, some of the capacity is reserved for formatting and redundancy for wear leveling. These reserved areas on an SSD may occupy up to 5% of the drive's storage capacity. On the Vertex Series the naming convention reflects this and the 30 is equivalent to 32GB, the 60 is equivalent to the 64GB and so on.

Here are the specifications: 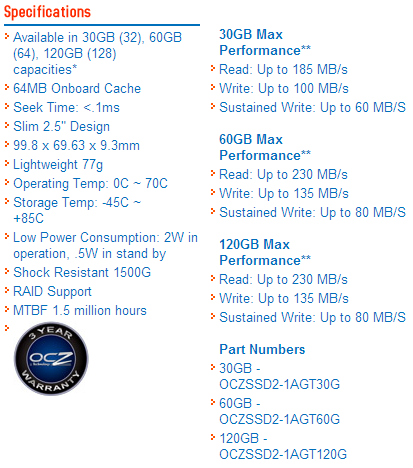 Typically I would open up the drive and see what's under the hood. However, the screws are threaded in and won't budge. I ended up stripping the heads off! From what I've been told and found online, the Agility uses the Indilinx Barefoot Controller with Samsung NAND chips. This combination should be deadly as the Barefoot controller was designed by a bunch of ex-Samsung employees. When paired with Samsung memory chips, there certainly shouldn't be any compatibility issues.

There's not much to share with installation. The drive gets installed like any other and at most you may wish to obtain a 2.5′ to 3.5′ bracket for a sturdy installation.

Once installed, I compared the power consumption of the OCZ Agility to a few other SSDs. The power drawn is for my entire system with the only variable being the SSD drive. All the drives have similar power requirements. 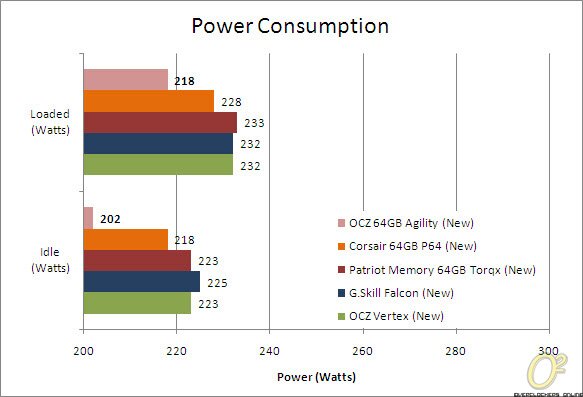 There's a pretty big difference between the OCZ Agility compared to what my other SSDs required to run the same computer. The loaded power consumption was taken with ATTO Disk Benchmark running. The load fluctuated between 210W and 230W. The idle condition was with just the system idling on the desktop.

I will be testing the OCZ 64GB Agility on my test bed as the primary drive with the OS installed on it. Here is my system specification:

The OCZ Agility was near the bottom of the pack compared to the rest of the drive. However, the spread is pretty minimal and one that won't greatly impact performance.

The Agility bounces back with the write results claiming first place at all the large transfer sizes. It becomes more on par with the Corsair P64 at the 4KB transfer size. The spread between an empty and new drive is pretty big and for most users you'll likely see the performance results in pink after owning the drive and filling it up. This is still significantly better than JMicron controlled drives and is still faster than my Patriot Memory Torqx which also uses the Indilinx Controller with Samsung NAND chips. 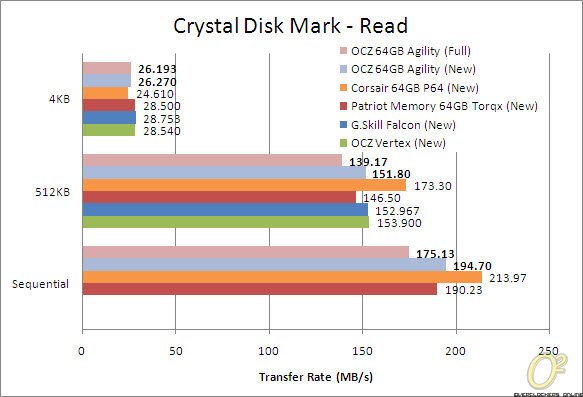 The random read results are consistent with all the other top performing SSDs I've owned. The sequential numbers are a touch better than the other Indilinx drive I've owned.

I could say there's a similar story to be told with the write results but the fact is the Agility blew the competition away. Even the full Agility performed faster than the new similar sized SSDs made by Patriot Memory, G.Skill and OCZ's Vertex.

There's nothing fancy to DiskBench – I commonly use it to see how long it takes to copy a file from one source to another. Seeing as this is a hard drive review, I'm going to use the ‘Create File’ feature and determine the speed at which the hard drive is able to create a 200MB file consisting of 100 2MB blocks.

Given the results from Crystal Disk Mark, I'm not surprised by what Disk Benchmark had reported. The empty drive blew the competition away and the full drive produced respectable results. 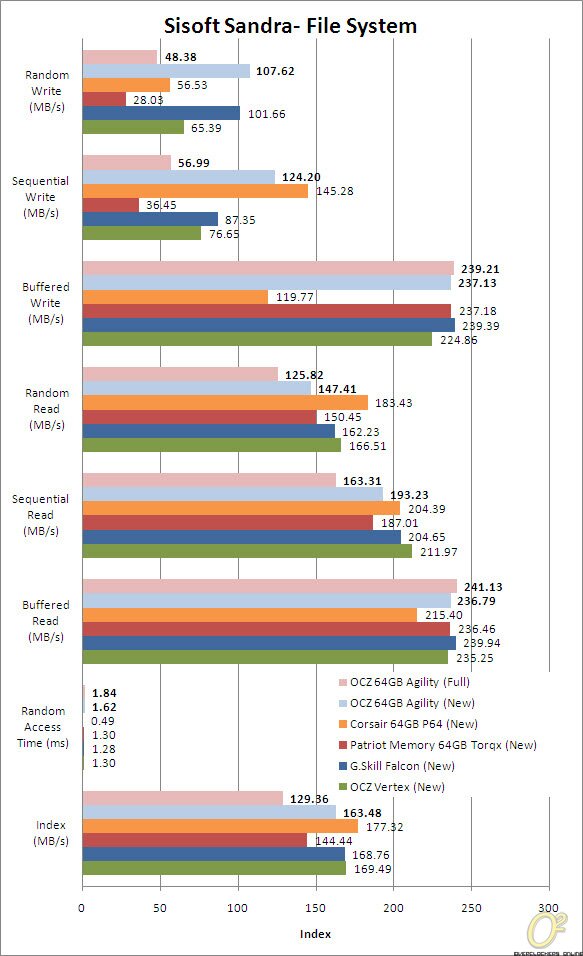 The OCZ Agility is generally at the top of the pack. There's a 50% drop between an empty drive and a full drive when looking at Random Write and Sequential Write performance. Over time this number will likely become the norm for any desktop user. However, it still beats out the empty Corsair drive which uses the second generation Samsung controller, kudos to OCZ and Indilinx. 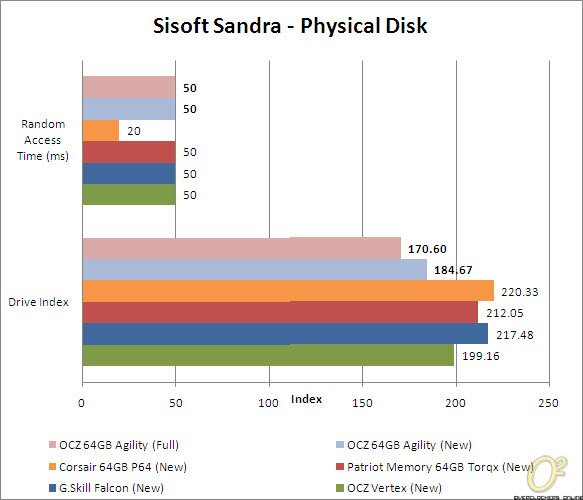 The random access time is essentially the same for all the drives I tested and the Indexed Score for the Agility is a tad behind its peers. 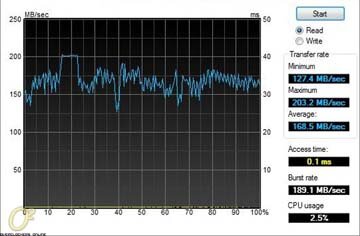 HD Tune lets us clearly see the performance drop between a new empty drive and one that is completely full. The Agility maxes out at 200MB/s with the lowest read speed being 125MB/s. For the most part the drive will hover in the 170MB/s mark depending on how full the drive is. 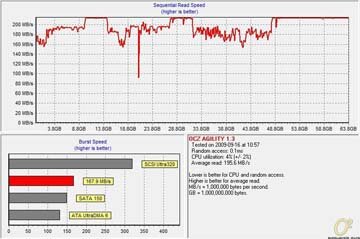 While the graphs look very sporadic, it's not actually too bad. There's the occasional dip too but a consistent average in both empty and full scenarios. 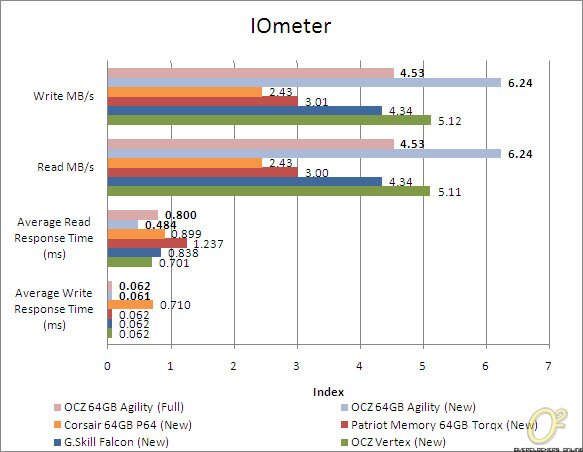 I was surprised by the Read and Write transfer rates as these are the fastest I've seen. They're twice as fast as the Corsair P64 and the full drive performs at the same speed as a new G.Skill Falcon. 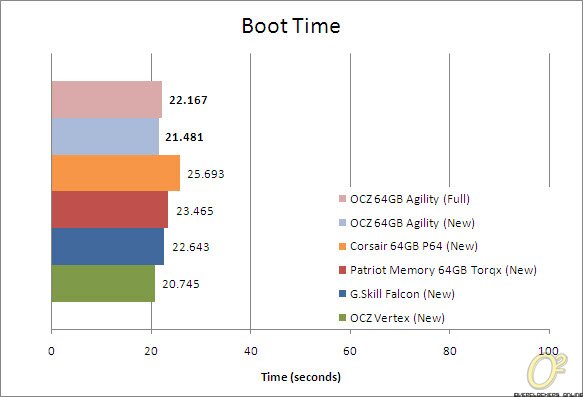 With fast random read and write speeds, I was not surprised to see the boot times drop compared to the competition. The drive isn't as fast as the more expensive OCZ Vertex but it spanks the rest of the competition around.

When I first received the OCZ Agility I knew it was a more affordable version of the OCZ Vertex I reviewed earlier. Even with the specifications claiming otherwise, I was expecting to see a drop in performance as cost cutting measures were in full effect to make this drive more affordable to the public. How pleasantly pleased I was, to be wrong!

The OCZ Agility is not only cheaper than the competition and OCZ's own Vertex, it performs just as well. It significantly reduced the power load for my PC and managed to put out some of the fastest numbers. Even after filling the drive several times to simulate a well used drive, the benchmark results still put the OCZ Agility ahead other Indilinx Barefoot and second generation Samsung drives.

I'd like to thank OCZ for making this review possible