Solid State Disks are the latest rage in the storage industry. Everyone is trying to out do each other and steal a piece of the market place. With only a few flash memory providers, the one with the largest stock and the lowest price is going to win. The question becomes, which provider is the best bang for your buck? Most of us can't afford the Intel X25-E SLC or the X25-M MLC for that matter. THis leaves us with a variety of JMicron controllers, Indilinx and Samsung. Today we have the Super Talent 128GB MasterDrive SX SSD built on a Samsung infrastructure.

The MasterDrive SX is built on the latest Samsung controller and makes no sacrifices by offering a blistering 220MB/s read speed and 200MB/s write speed. How does this compared with other controllers on the market? Let's find out!

I'm never looking for very sophisticated packaging when it comes to hard drives; if the drive comes in a sealed anti-static bag then I'm happy. With the Super Talent MasterDrive SX you get a nice package with a picture of the drive and specifications on the back. 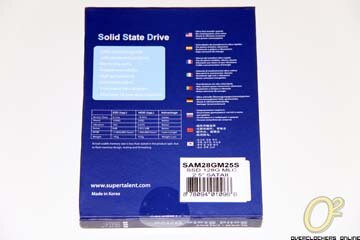 The sides of the box don't relay any useful information for potential buyers. I would have been happy if it were just colored blue with Super Talent's name written across.

Opening up the box, the drive is padded on the sides by soft foam. There is a tiny bit of cushioning on the top of the drive but nothing for the bottom. 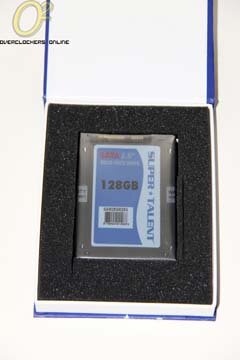 Unlike the Indilinx controller based drives that I've reviewed in the past, you will find that there is no jumper connection for firmware upgrades. The only connections available are the SATA data and power cables. The drive chassis is brushed aluminum and held in place by 4 torx screws. 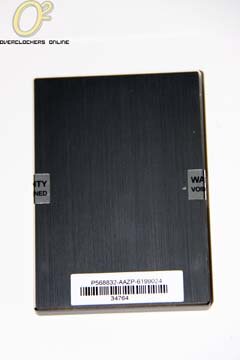 To confirm that these SuperTalent drives are indeed based off the new Samsung controllers I voided my warranty and got my torx screwdriver to open the chassis. If I didn't know I was reviewing a Super Talent SSD, I would have figured it'd be a Samsung drive as everything is etched with Samsung's name. 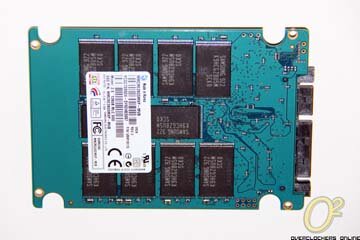 We have the Samsung S3C29RBB01-YK40 N1TRPNPK ARM controller manufactured in week 29 of 2009. There's not a whole lot of information available on this controller but do a Google search and you'll see a fair number of other companies using it. The 128MB onboard cache is provided by a Samsung K4X1G323PD-8GC6 chip. Last but not least, the storage array is composed of Samsung K9HCGZ8U5M SCK0 CADD61X2 modules. 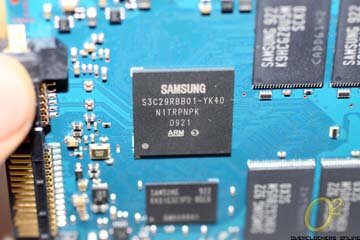 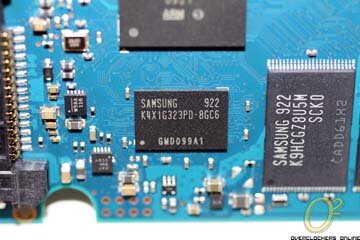 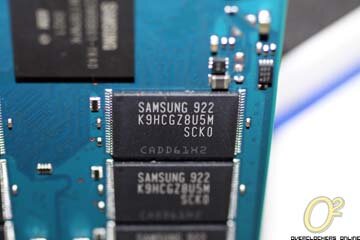 Here are the features and specifications taken directly from Super Talent's website. 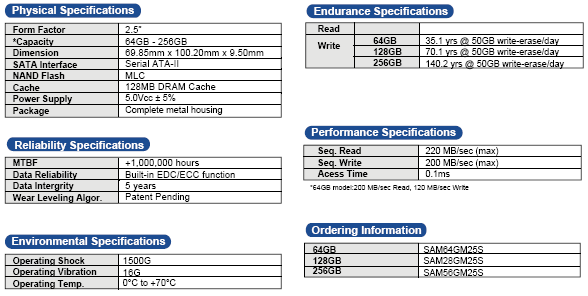 There's not much to share with installation. The drive gets installed like any other and at most you may wish to obtain a 2.5′ to 3.5′ bracket for a sturdy installation. Once installed, I compared the power consumption of the Torqx to a few other SSDs and a conventional 500GB Seagate hard drive. With no surprise, the SSDs are a few watts below the conventional hard drive. It also appears that the Indilinx controller requires a few more watts than the original JMicron controller but the Torqx shows no difference between the OCZ and G.Skill Indilinx based drives.

I will be testing the Super Talent MasterDrive SX on my test bed as the primary drive with the OS installed on it. Here are my system specification: 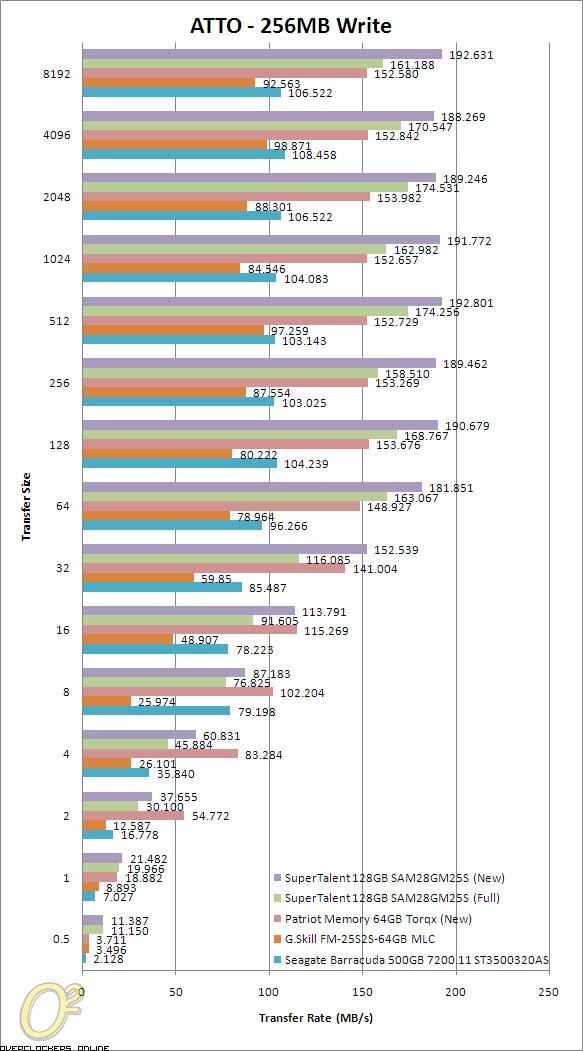 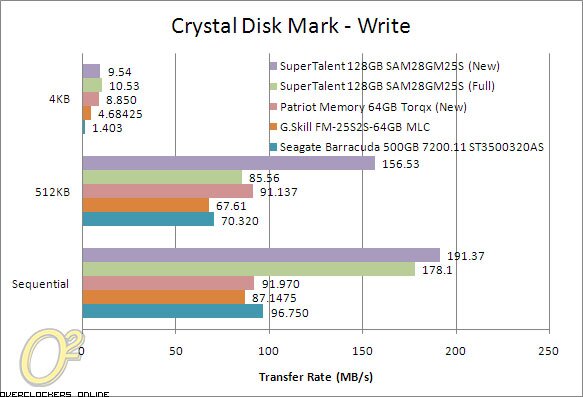 The sequential tests are significantly faster with Super Talent than with the Patriot Memory Torqx. The only time the numbers are close is with the 4KB random read where Super Talent is a few MB/s slower.

There's nothing fancy to DiskBench; I commonly use it to see how long it takes to copy a file from one source to another. Seeing as this is a hard drive review, I'm going to use the ‘Create File’ feature and determine the speed at which the hard drive is able to create a 200MB file consisting of 100 2MB blocks.

Super Talent goes toe to toe with the rest of the drives; the original JMicron G.Skill drive is miles behind the rest but everyone else finishes within a few MB/s of each other. 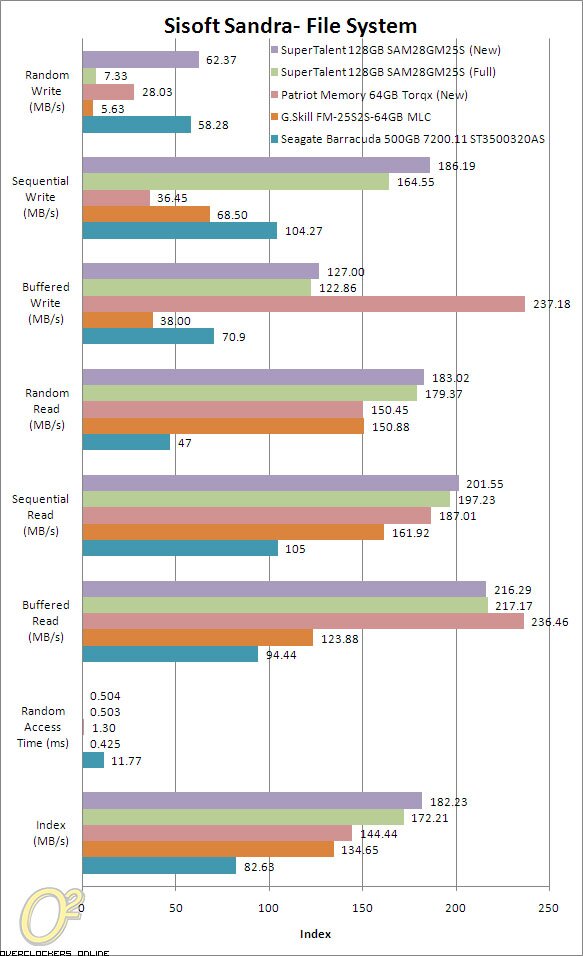 We can see that the difference between a brand new drive's performance and one that has been filled is very small. The only exception is with the random write results where the Super Talent MasterDrive SX has a 55MB/s gap between new and full. We don't see this large of a difference in any other benchmark. The random access time is also one of the lowest ever recorded. The MasterDrive SX's transfer rates are all slightly higher than the Patriot Memory Indilinx based Torqx SSD and clearly beat out the G.Skill JMicron SSD and my Seagate mechanical drive. 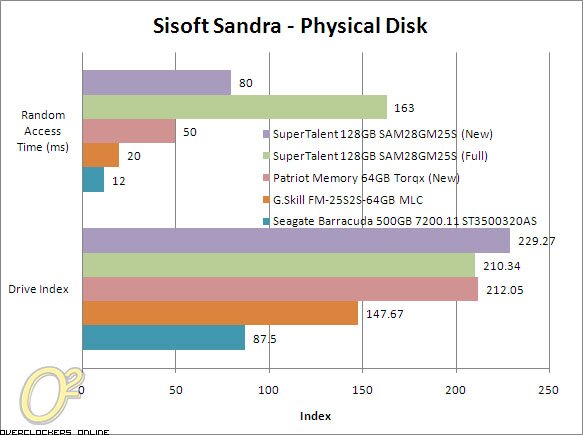 The access time skyrockets to areas generally not seen by hard drives, I'm unsure why this was the case. Regardless, the MasterDrive SX's index is still ahead of the rest. 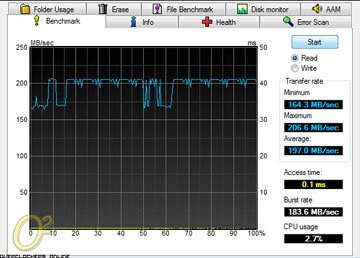 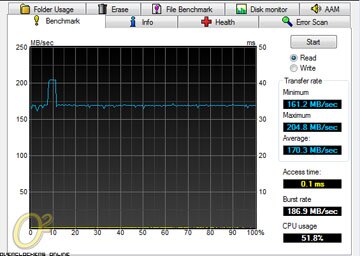 For the first time we see a big drop between in performance between a new and full drive. It's about 30MB/s across the entire drive but even at the lower end of the numbers the MasterDrive SX performs very well against its Indilinx competition. 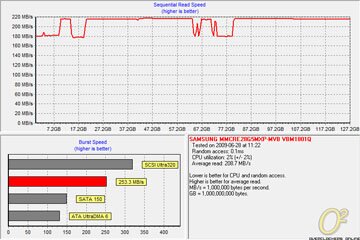 Same story as above, a 40MB/s drop across the drive but it is a very consistent performance unlike the ups and downs noted in the Torqx.

This is best in class performance by the MasterDrive SX; the read and write speeds are at the top and we have the lowest latency numbers compared to the other drives. 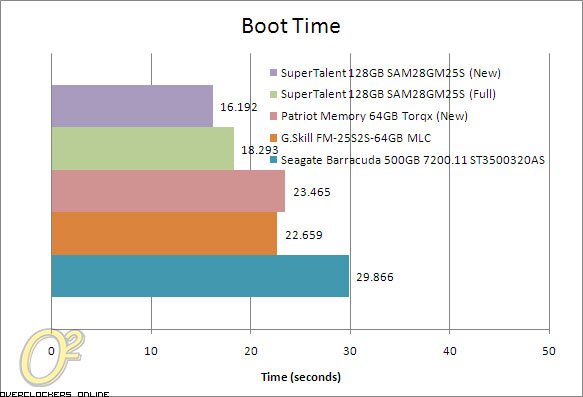 As you can predict after seeing the IOMeter results, the Super Talent MasterDrive SX has the quickest boot time in the class. A sizeable difference of almost 10 seconds too. This is clearly a result of the faster access times and random read and write.

When you say the name Super Talent, the first thing that comes to my mind is the DRAM manufacturer. Super Talent is a company in the business to manufacture DDR, DDR2 and DDR3 memory modules. They were also quick to jump on the flash storage bandwagon with an extensive variety of USB drives. It was a logical and easy move for them to start selling solid state drives.

The MasterDrive SX is one of the latest offerings by Super Talent. Using a Samsung controller, Super Talent is relying on proven technology to bring the best to your PC. The 128MB of DRAM cache offers some of the fastest random access rates and transfer times I've seen. The sequential speeds are in the 200MB/s range and show little difference whether the drive is brand new or completely full. If I had to nitpick the drive and find a flaw, it would be the short 1 year warranty Super Talent is offering where other manufacturers are up in the 10 year mark. Despite that, Super Talent has a winner on their hands. 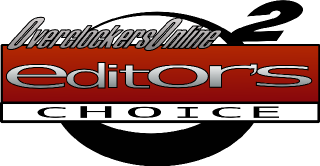 I'd like to thank Super Talent for making this review possible.