Solid State Drives, better known as SSDs, have become increasingly popular thanks to the likes of OCZ Technology. As a power house in the industry for all things DRAM related, OCZ has 8 models of SSDs available on their website each with two or three drive capacities. While SSDs have been commonly known for lower power consumption and heat, particularly important when it comes to flash memory for cameras or camcorders, SSDs used in notebooks and PCs today don't have the same concerns. An 800W power supply will power many hard drives and your one 4870X2 probably generates more heat than the combined number of SSDs you could afford.

Solid State Drives are primarily purchased for one reason: speed. Hard drives haven't changed in technology for quite a number of years but the new SSDs have evolved from the first generation into lightning quick response times and high speed bandwidth. The first evolution of affordable SSDs were plagued. After a bit of use, they would eventually bog down your system to performance levels slower than your average SATA. The OCZ Vertex with the Indilinx Barefoot controller aims to resolve that and provide consistent performance regardless of whether or not your drive is brand new or well-aged like a fine wine.

I received the OCZ 30GB Vertex in its retail packaging. It promptly displays what the Vertex drive looks like but on the list of features the first line is ‘New, Faster SATA II Access Time’. This can basically be attributed to the 64MB Cache listed as the second key feature. The back of the package gives a breakdown of the specifications and a paragraph marketing the Vertex. 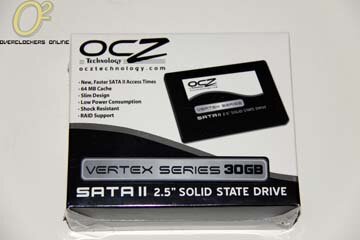 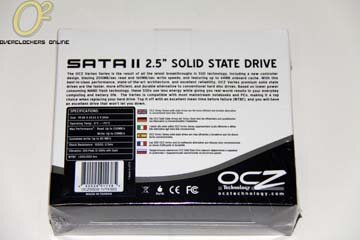 The sides of the box re-iterate the product name so we're going to skip those photos and jump right into the internal packaging. The Vertex is packaged almost identical to the G.Skill Falcon earlier reviewed. The second box completely surrounds the drive with foam to protect it from bumps and drops during transportation. 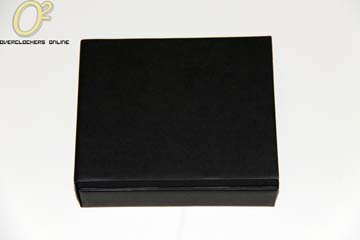 With the exception of the hard drive, the only other item with the packaging is an instruction and warranty manual. Surprisingly, there is no jumper included in the package to assist in firmware flashing.

The drive is protected in an anti-static plastic bag and by removing this we get our first good look at the OCZ Vertex. The front is pretty bland and the underside displays some technical information about the Vertex and its capacity. 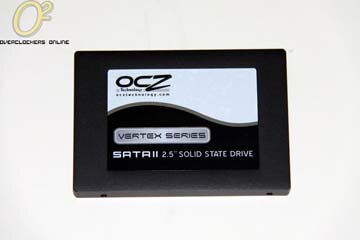 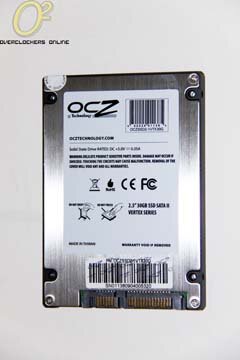 Since the Vertex is 2.5′ and really intended for a notebook the power and data connection points are oriented as such. We can clearly see the two pings used for flashing the firmware on the second image.

Offering your system the incredible performance of flash-based storage, the OCZ Vertex Series delivers the performance and reliability of SSDs at less price per gigabyte than other high speed offerings currently on the market. The OCZ Vertex Series is the result of all the latest breakthroughs in SSD technology, including new architecture and controller design, blazing read/write speeds, and 64MB of onboard cache.

The OCZ Vertex drives feature a durable yet lightweight alloy housing, and because OCZ SSDs have no moving parts, the drives are more rugged than traditional hard drives. Designed for ultimate reliability, Vertex Series SSDs have an excellent 1.5 million hour mean time before failure (MTBF) ensuring peace of mind over the long term. All Vertex Series SSD drives come backed a two year warranty and OCZ's legendary service and support.

By now just about everyone knows that OCZ is using the Indilinx Barefoot controller. Indilinx claims it supports up to 256GB with performance in the range of 230MB/s read and 170MB/s write which is in the same range as the Vertex depending on which model you own.

If you're interested in buying the Vertex SSD or any SSD for that matter, you must already know how to install a 2.5′ hard drive. For laptops, the drive needs to be mounted onto your hard drive cage and pushed into the bay. For desktop PCs, you'll need to purchase a 3.5′ to 2.5′ drive bay converter, screw the drive into place and plug in the SATA data cable and power.

I compared the power consumption of the Vertex to a few other SSDs and a conventional 500GB Seagate hard drive. With no surprise, the SSDs are a few watts below the conventional hard drive. It also appears that the Indilinx controller requires a few more watts than the original JMicron controller. 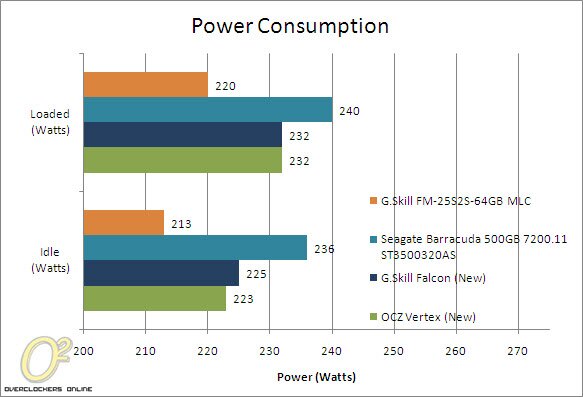 I will be testing the OCZ Vertex on my test bed as the primary drive with the OS installed on it. Here's my system specification: 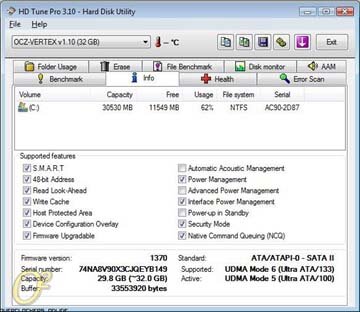 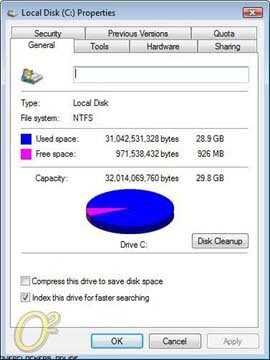 ATTO Disk Benchmark is probably one of the gold standards when it comes to drive performance. The software itself is fairly old but it works, measuring transfer rates at different transfer sizes for a file being 256MB in size. 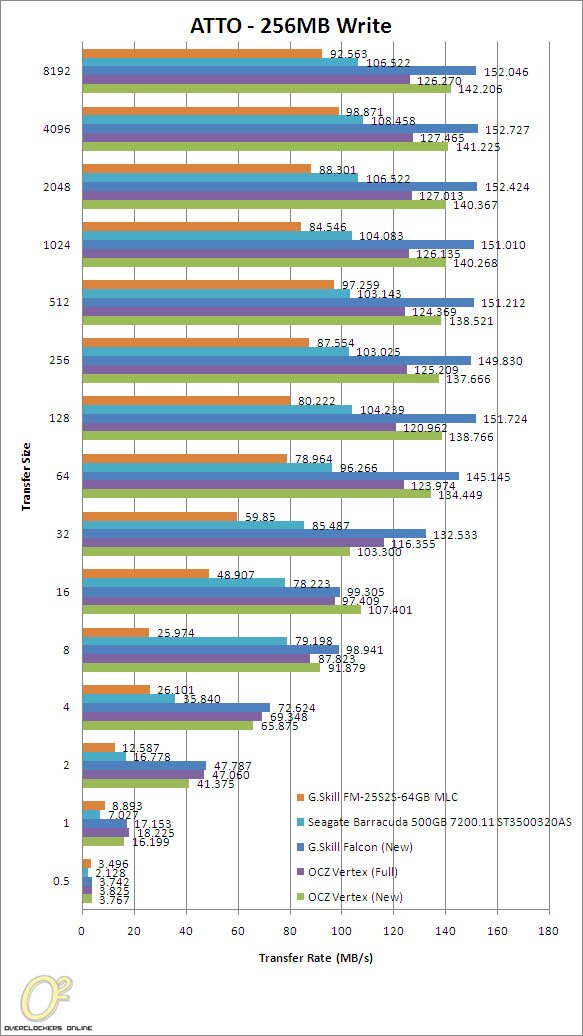 The OCZ Vertex is off to a very strong start, almost 50% faster than the JMicron MLC SSD. It is a few MB/s slower than the G.Skill Falcon which also uses the Indilinx Barefoot controller but the difference is negligible at these rates. We're talking maybe needing to wait an extra second or two for a file transfer to complete. 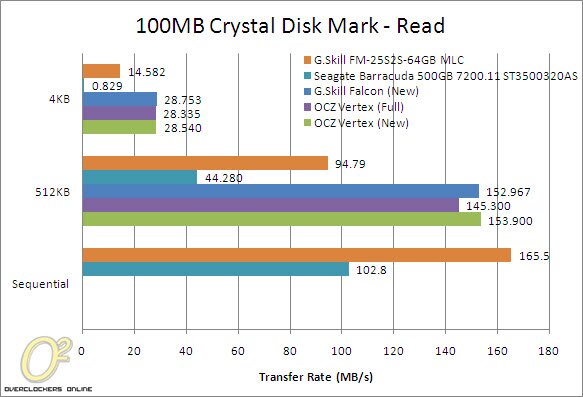 Crystal Disk Mark Sequential Read didn't give a realistic number; it was in the thousands of megabytes per second. We can see that the 4KB random read and write performance doubled over the JMicron controller. Once the drive was full, the write performance for the Vertex at 512KB Random and Sequential shows little difference and actually falls back in the ranking.

There's nothing fancy to DiskBench, I commonly use it to see how long it takes to copy a file from one source to another. Seeing as this is a hard drive review, I'm going to use the ‘Create File’ feature and determine the speed at which the hard drive is able to create a 200MB file consisting of 100 2MB blocks. 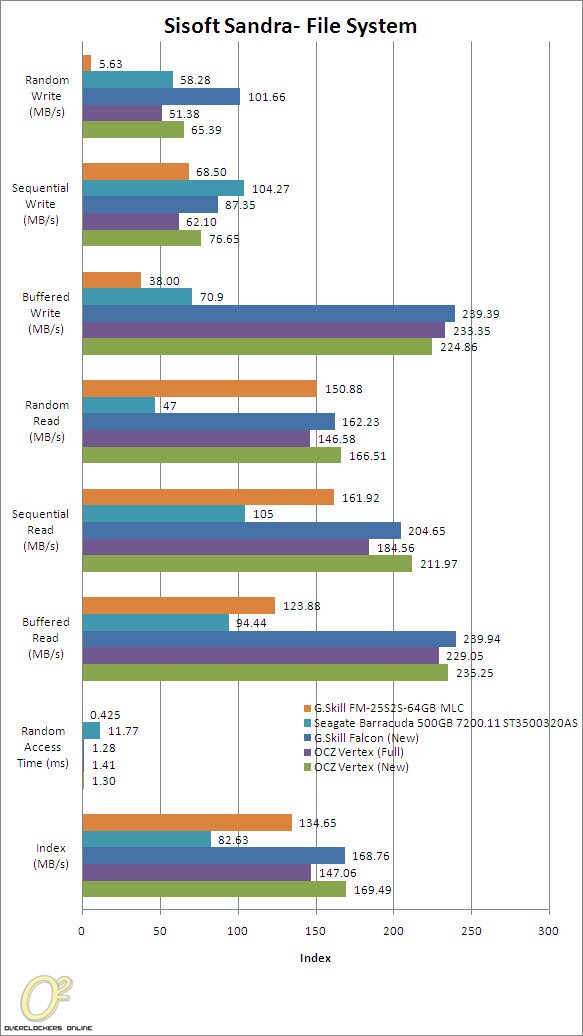 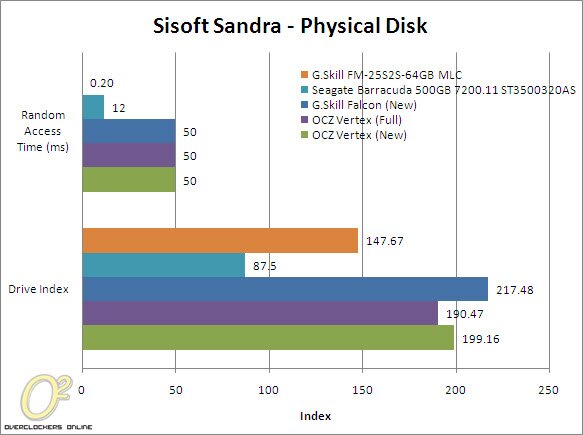 Yet another hard disk utility to determine the performance of your drive. HD Tune runs a few tests to provide a transfer rate (minimum, maximum and average). It also trends the performance through the entire disk and gives you the access time, burst rate and CPU usage. 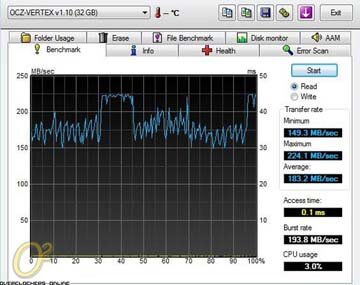 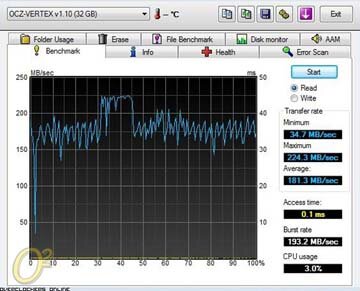 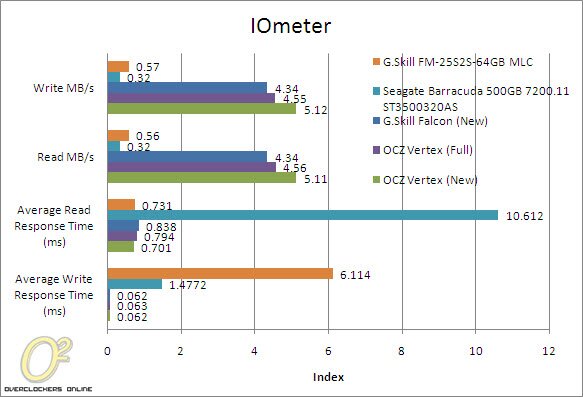 It's clear that with an average write response time of 6.114 seconds on the JMicron controller compared to 0.062ms from the OCZ Vertex the system will stutter. Even the read and write performances are factors higher with the OCZ Vertex.

With SSD comes the reduction of start-up times. Basically every application will load up a tiny bit quicker. The performance is very much related to how fast the drive is able to read random files scattered throughout your drive required for load up and how many operations it can handle at once. The higher these two throughputs, the faster programs will load. With the OCZ Vertex, we've got a good lead over the original JMicron controller and the G.Skill Falcon. 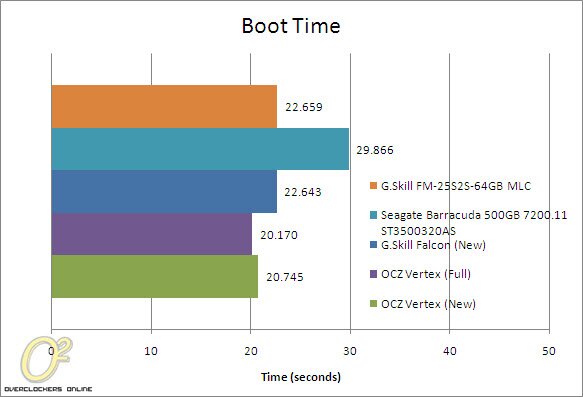 To an unknown user, the OCZ Vertex appears to be like all the other OCZ Solid State Drives. It's a black box with an adhesive label indicating the series and capacity. Function comes first in my books over form and the OCZ Vertex does exactly that. Once installed in your PC or notebook, it'll rarely see the light of day but under the hood is a powerful engine waiting to roar to life. 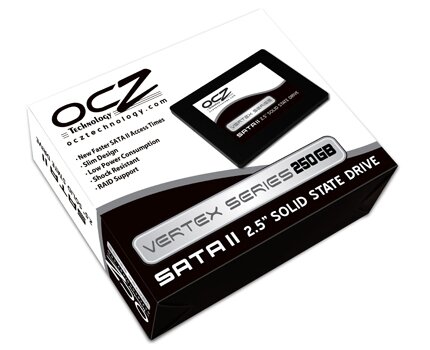 The OCZ Vertex is leaps and bounds better than the original JMicron Solid State Drive. If you're an owner of the first generation drives and noticing your performance and system is starting to fall behind, it is time for an upgrade. I was originally pleased with the JMicron MLC SSD but after a few short weeks of use my notebook started to hang for a few seconds at a time. As OCZ clearly indicated on their packaging, my OCZ Vertex gives me faster access times resulting in a far more stable machine. The 64MB cache has made a world of difference and OCZ didn't sacrifice too much bandwidth for the improved access time. We're still well into the 140MB/s Write and 200MB/s Read. With Win7 just around the corner and the OCZ Vertex already claiming to support the TRIM command, OCZ's Vertex has a very bright future ahead of itself.

I'd like to thank OCZ for making this review possible.