The summer of 2008 can be remembered as one filled with new hardware coming from all the video card players. With a new Geforce 9 family and a half dozen ATI 4800 cards available, it was a shopper's delight. Manufacturers were competing with each other and it was a good time to be a computer user looking for an upgrade. Biostar jumped on the bandwagon by offering a number of new Geforce 9 cards and today we have their 9500GT.

The Geforce 9500GT is the budget card for the Geforce 9 family. It doesn't offer all the bells and whistles we normally see in high end equipment but it doesn't mean there's no hope for it. Today we'll see what Biostar has to offer and how the 9500GT stacks up against some other cards.

The Biostar 9500GT came in a pretty standard video card package. It's a standard box with a scantily clad female figure from some fantasy world and logos of different features available with the card. On the back of the card we get a list of key features in 9 different languages as well as Biostar corporate offices that you can contact. 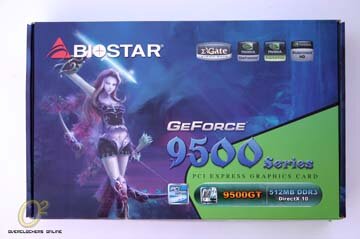 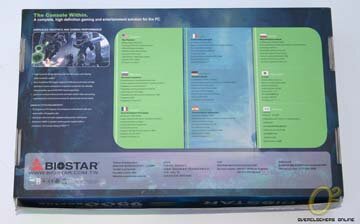 On the sides of the box we have the company name and product name. We also have the EAN, S/N and UPC label attached to one side.

Opening up the package, we quickly gain access to the video card and accessories. The package is pretty simple with only a manual, driver CD and video out cables. 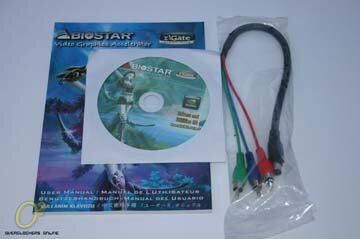 Removing the video card from the anti-static bag reveals the card in all its glory. Biostar has decided to use the typical green PCB and the heatsink is made from copper. The cooler is different than the reference design which is a large heatsink with probably a 60mm fan acting as a blower. The Biostar cooler doesn't have any material over the memory ICs but the airflow from the cooler should keep all the integrated components cool. 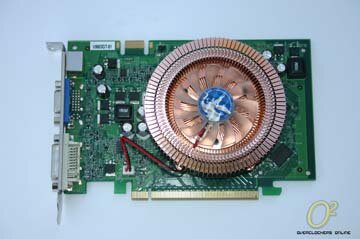 The 9500GT sports one DVI output, one VGA output and one video output. You can see why a DVI to VGA dongle is not required. Despite this card being budget oriented, I would have liked to see 2 DVI outputs with one DVI to VGA and one DVI to HDMI adapter. LCD monitors are cheap and it's not uncommon to see a user with two DVI capable displays on their desk. Likewise, this card may be budget but it may be perfect for someone who needs an HTPC for their new home theatre. In cases like this, an included DVI to HDMI adapter would be very much appreciated.

Flipping the card over we get a naked backside. Apart from the serial number and mounting hardware, there's nothing of interest on the back of this card. 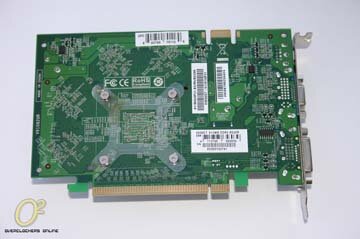 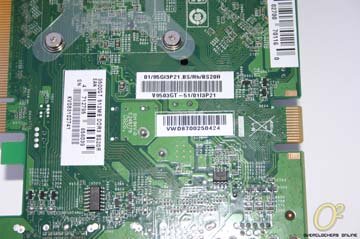 Let's move onto the specifications for this card now.

The 9500GT is pretty easy to find on the Biostar website if you know the model of your card. The 512MB 9500GT that I have is also known as the V9503GT51. The specifications are pretty basic and laid out on a single page.

Removing the heatsink off the video card gives me direct access to the core:

We clearly see it's a G96 based core made by nVidia. With the heatsink off, we also get a good view of the memory. Biostar has opted to use Qimonda memory and they're definitely a reputable company. I've worked first hand with these folks and I like what I see. 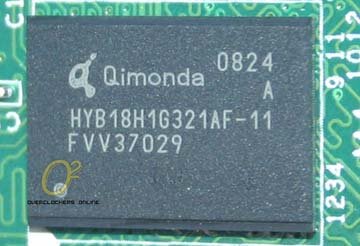 The chips on the card were manufactured in week 24 of 2008. The model is
HYB18H1G321AF-11 FVV37029
. The datasheet for this product can be found here. You don't really need to look very far to find out what these chips are good for. The product model ends in
-11
making these chips good up to 900MHz or 1.8GHz DDR2. Since this memory is only clocked at 1600MHz, there's definitely headroom for overclockers.

If you've read through page 1 of this review, there won't be too much new to this page. I'll start this section off by showing you the video card from all the major sides.

In addition to the pictures of the card, I removed the heatsink so we can see what's under the hood. Biostar used a generic thermal paste which had good consistency. It wasn't too runny and it wasn't a regular blob of white goo. The heatsink itself was flat and sanded but not perfectly smooth. However, the heatsink made good contact with the core. 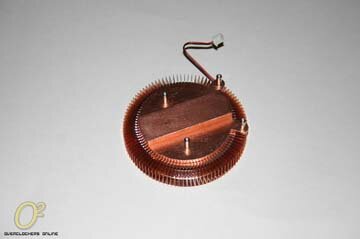 Time for us to move onto installation and testing.

Installing the 9500GT is pretty darn simple, remove your old video card and slide in the 9500GT. The 9500GT is not a very power hungry card and won't require auxiliary power. This makes it the perfect upgrade for those aging machines needing a quick and cheap boost of performance.

The card is relatively low profile but will still take up a second slot in your computer.

This card was tested using the nVidia GeForce 177.79 drivers. I attempted to overclock the card with RivaTuner but was completely unsuccessful. Being a budget card, Biostar did not include any of their VRanger tools that would allow me to adjust the voltage and core and memory frequencies. I was a little disappointed in this because I was really underutilizing the memory.

Here is a complete list of the hardware that will be used for benchmarking:

The benchmarks we'll take a look at include the following:

You'll notice that the other video cards I'm working with aren't even in the same class as the 9500GT. It is for that reason that you take these numbers with a grain of salt. They are there for your reference and not as a direct comparison. I will be speaking about the results of the Biostar 9500GT and that's all in the following pages.

The first four benchmarks I ran were from the Futuremark 3DMark family. We all know what Futuremark products are for, so I won't go over them. The Biostar 9500GT scores just above 2000 in 3DMark Vantage. It is by far the bottleneck in the newer versions but less so in the older 3DMark applications. Going back to 3DMark 2003, my system with the Biostar 9500GT hits a respectable 22.5k – great if it were the year 2003.

The second benchmark I looked at was Cinebench's OpenGL Standard Test. Cinebench is a real-world suite that assesses your computers performance using Maxon's Cinema 4D software. Cinebench runs two tests but we're only interested in the second one:

The second test measures graphics card performance and is run inside the 3D editor window. The project file used can test all graphics cards that support the OpenGL standard. In this scene, only the camera was animated. This scene places medium to low demands on graphics cards and tests the maximum speed with which the scene can be properly displayed.

The Biostar 9500GT performs remarkably well in the Cinebench software, it actually manages to beat out some of the new ATI cards. This is mainly because nVidia has worked out a lot of kinks in the OpenGL driver. 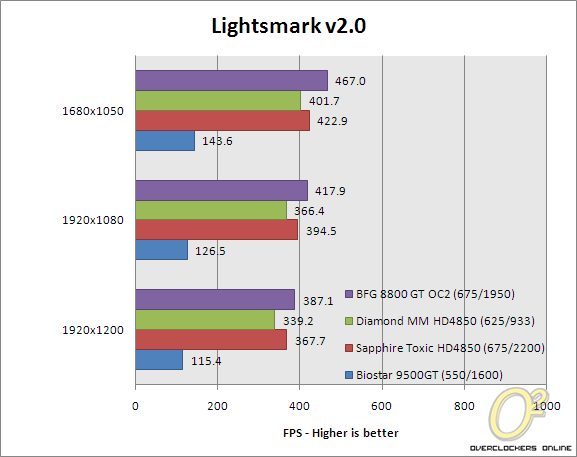 This time the 9500GT doesn't fare so well with the OpenGL benchmark. However, the framerate with Lightsmark is really relatively high, faster than what the human eye could ever process.

Video games, the real reason why so many of us spend thousands of dollars on building the ‘perfect’ PC balancing power to price. There are countless games in the world that we could play and to benchmark them all would simply take a lifetime. I have selected to compare the results between three titles, some newer than others and some more demanding than others. Starting with Unreal Tournament III, this game was released in 2007 and the Unreal Engine has been popular with many games but isn't the most demanding.

The Biostar 9500GT is definitely not your average gamers' card. It's targeted towards budget conscious people who still want to enjoy games but are willing to sacrifice some performance to save money. The Biostar 9500GT holds up nicely against UT3. You can still enjoy the game at 1680×1050 and it wouldn't be terrible at 1920×1200. 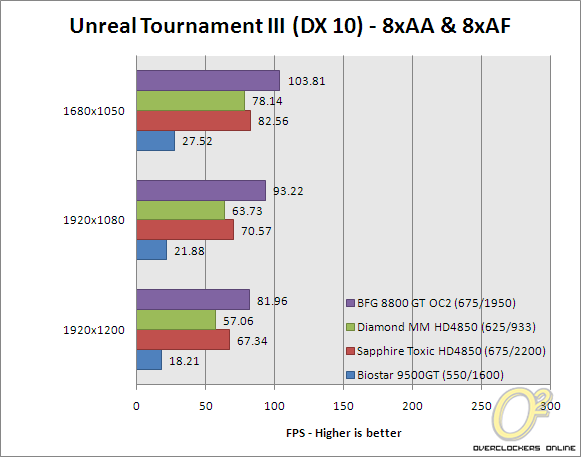 Once you crank up the detail with AA and AF, the 9500GT definitely shows that it can't compete. 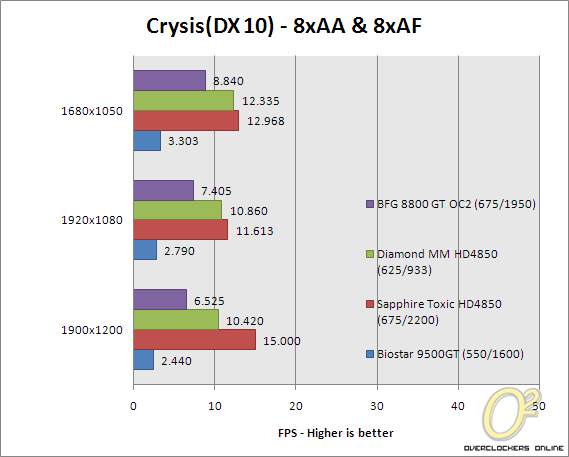 Crysis shows no mercy on the 9500GT as 5 frames per second wasn't even broken at 1680×1050. There's almost no point in enabling AA and AF but the numbers are shown in the second chart.

For the price this card costs, it doesn't do too bad with World in Conflict. With an average of 10 frames per second, it's not a whole lot but with the details turned down, you could still enjoy this title. 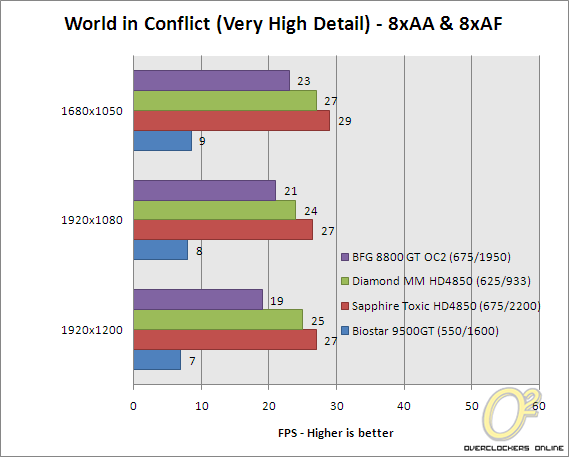 There's a small drop in performance with AA and AF enabled. If you turned the detail down in the game, the 9500GT wouldn't do too bad at the lower resolutions.

We've toured the Biostar 9500GT in great detail and it's time to wrap up another review. Let's be clear, the Biostar 9500GT is a budget card and there's absolutely no way you could expect it to compete against the 8800GT or any of the other cards I put it up against. 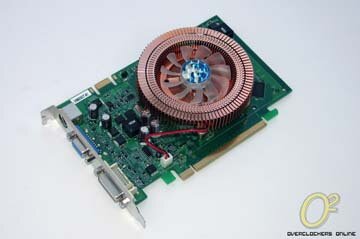 With the card itself, I was a little let down by the fact that the card only had 1 DVI output and when I realized Biostar didn't take full advantage of the 900MHz capable memory chips. However, there's a silver lining in the grey clouds. While I didn't have success in overclocking, your results may differ as there's plenty of potential headroom to be had. As well, once you find out that this card retails in the 70 dollar range, you suddenly realize all the potential it holds. It's for the budget conscious and it's a great budget upgrade for an older PC. When paired with a 19′ LCD monitor at 1280×1024, you can still play some of the newer titles on the market. It may not provide the fastest framerates, but it'll do.

For anyone in the market for a cheap upgrade from an integrated graphics processor or an older 8400 card, this is something to seriously consider.

Overclockers Online would like to thank Biostar for making this review possible.