When it comes to motherboards, there is a great difference between the high-end boards and the low-end boards not just in features but also in terms of price. This is where companies like Biostar come in – their boards often strike a balance in terms of value by incorporating both features and a decent price.

The Biostar T-Series has been seen around Overclockers Online and has always performed well. In this review, we will be looking at one of the newer members of the T-Series, the
TF7150U-M7
which features an integrated NVIDIA GeForce 7150 video chip on the nForce 630i platform for Intel LGA775 processors.

Biostar has gone with an eye-catching design for the package in which the TF7150U-M7 comes. The T-Series logo is seemingly everywhere. Also, NVIDIA insignia can be found on the top. 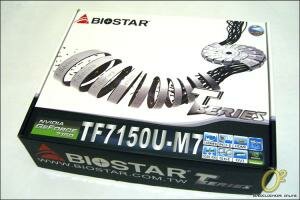 Several graphics showcase some of the board's main features. 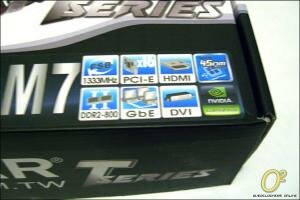 The sides feature Biostar's logo as well as the URL to their website. 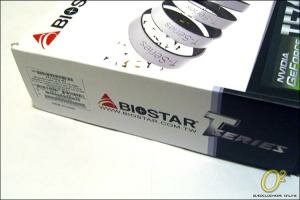 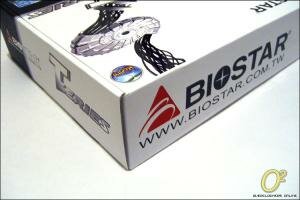 Flipping the box over, we see some specifications and features. 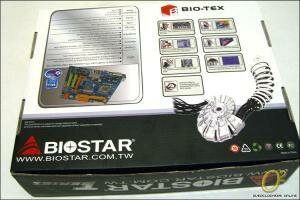 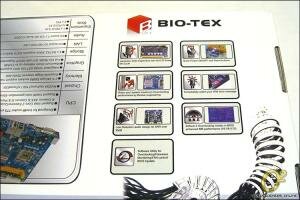 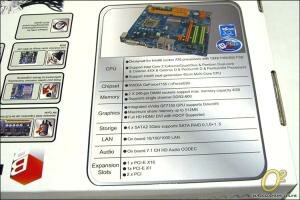 Opening the box, we are greeted with a very minimalistic-looking pair of boxes, one of which has the T-Series logo. 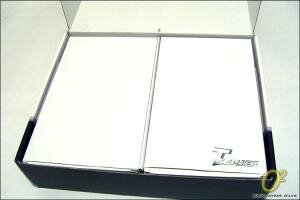 These boxes contain the accessories which consist of two SATA cables, an I/O shield, a Molex-to-SATA power cable, a floppy cable, and an IDE ribbon cable. Also, we have the driver and utility CD and a user's manual. 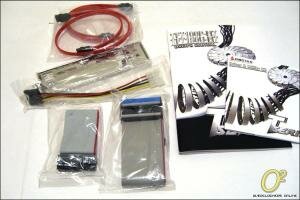 Below the boxes and inside an anti-static bag resides the motherboard. Before we get our hands on it, let's take a closer look at the features and specifications.

The product page for the TF7150U-M7 can be found on Biostar's website. Most of these features and specifications were taken from there.

Here are the features and specifications that we looked at in the previous section: 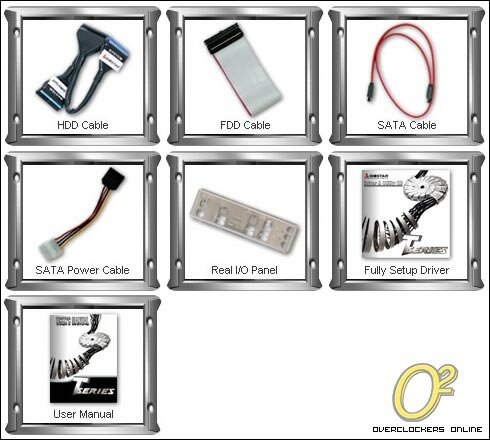 One of the features that set the TF7150U-M7 apart from competitors include the fact that it has built-in HDMI out as well as DVI-out. The GeForce 7150 IGP is by no means a replacement for a dedicated GPU but it is advertised more as an able performer to be used in HTPC applications and the like.

Let's look at the motherboard layout.

Being a micro ATX board, naturally there are going to be compromises when it comes to layout. However, the fact that the NVIDIA 630i/7150 is a single-chip solution somewhat alleviates this. Still, there are bound to be some issues which may not be immediately apparent.

There is a lot of room around the LGA775 socket for the most part. This should make it easy to install large coolers. However, the 4-pin power connector is located in a congested area. 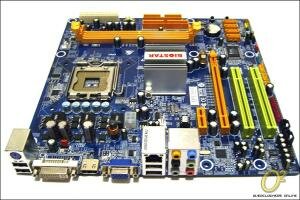 Looking at the rear I/O panel, we have the following ports: a PS/2 keyboard, two USB 2.0, one DVI, one HDMI, one D-SUB, a RJ-45 ethernet, two more USB, and six audio ports. A lot of space is wasted by the placement of the video-out ports which could be stacked so that maybe Biostar could have included a PS/2 mouse port or maybe even more USB ports. Apart from that, I have no problems with the I/O panel.

Going back to the socket area, we see that Biostar has gone with a passive cooler for the 630i/7150 chip. This should keep things quiet.

To one side of the socket, there are five solid capacitors as opposed to the inferior electrolytic capacitors used elsewhere.

Moving over to the expansion slots, we have a PCI-E x1, one PCI-E x16, and two normal PCI.

Around the slots we have the 7.1 channel HD audio codec (Realtek ALC888) as well as the network controller (Realtek RTL8111B). 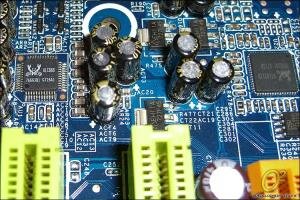 Next up we have the USB and front panel header area. There is an ITE IT8718F-S chip here that provides fan control and temperature sensing among other things. Also, we have four SATA ports and perhaps my favorite feature: built-in power and reset switches.

Coming back around full circle, we find two DDR2 slots flanked by the FDD and IDE connector. The 24-pin connector is in the corner.

Here's a look at the 7150 chipset; this was done after all the testing so as not to affect the results or damage the board.

Finally, we have the backside of the board. Nothing interesting to see here other than the eight mounting holes which brings us to the next section: installation. 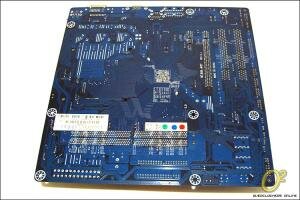 The first step to installation is, of course, securing the CPU to the socket. 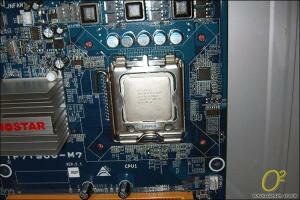 Next, I installed the relatively large Noctua NH-U12P cooler.

Finally, I installed the memory, video card, and connected the power cables and drives.

Everything went well and there were no problems. However, I will point out that you might have a problem using this motherboard in cases in which the power supply is mounted at the bottom as the 24-pin power connector is located at the top right corner of the board. I had trouble trying to reach it in the Antec P182 so testing was done outside the case.

Thanks to the onboard power button, starting up was a breeze. This brings us to the BIOS. I will be covering all the major sections.

Here's the splash screen with the T-Series logo:

Biostar has gone with a Phoenix AwardBIOS. 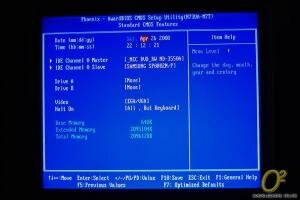 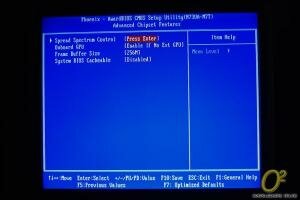 The PC Health Status page is relatively detailed for a budget board.

Finally, we get to the fun stuff, the Overclock Navigator Engine:

There are a few automatic overclocking settings which, in my opinion, do not really do justice to the word overclocking. So switch it over to ‘Manual Overclock’ to unleash all the options. The memory divider can be set to Auto, Linked or Unlinked which is great. Also, the FSB and memory speeds can be adjusted independently over a range of values. DDR voltage can be set between 1.95 and 2.65 V in 0.10 V increments while CPU voltage can be increased up to +0.787 V over stock values!

Going to ‘Memory Timing Settings’ reveals even more options, some of which are beyond my understanding!

That should cover most of the BIOS.

Biostar's included driver CD has some software that Vista did not care much for. I went to Biostar's website to update the BIOS using their excellent one-click Live Update utility but I already had the latest version. I also got the latest drivers at this time.

In terms of overclocking, I did everything through the BIOS. I reached a decent stable overclock of 350 MHz for the FSB (1400 QDR), an increase of 31.5% from the stock 267 MHz (1066 QDR) at stock voltage. This increased the CPU's speed from the stock 1.86 GHz to 2.45 GHz. I left the memory running at its default speed of DDR2-800 using the ‘unlinked’ option in the BIOS. I did not try to push it further as the TF7150U-M7 is more of a value/HTPC board as opposed to an overclocker's dream.

Benchmarks will be run with the following variations:

Benchmarks will consist of both system and gaming types. Each will be run three times and the result will be the average.

Gaming benchmarks will consist of Futuremark 3DMark06, Crysis, Call of Duty 4, and BioShock.

The Futuremark benchmakrs have been the gold standard for enthusiasts worldwide. 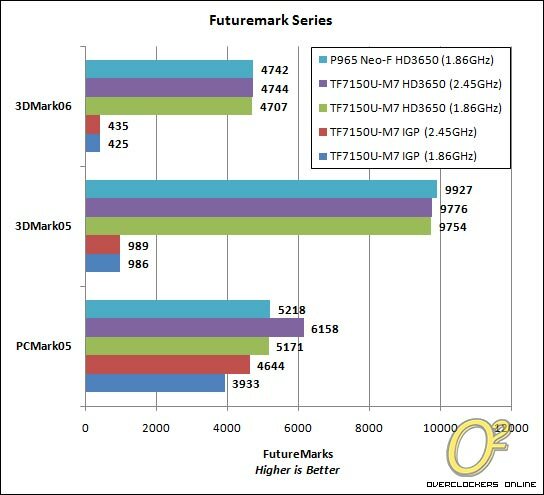 The TF7150U-M7 performs as well as the MSI P965 Neo-F. Overclocking improves performance slightly and using a dedicated graphics card results in much higher scores in both 3DMark06 and 3DMark05.

Everest Home Edition features a simple set of memory benchmarks that allow measurement of latency as well as write and read speeds.

A curiosity here is that using the IGP as opposed to a dedicated graphics card results in lower scores. This may be because the IGP uses some physical memory – there is an option in the BIOS that allows you to set the amount of memory allocated to the IGP. Even with a dedicated graphics card, the memory controller on the MSI P965 Neo-F seems to be more efficient than the TF7150U-M7.

Next up, we have the SiSoft Sandra benchmarks which include memory, CPU arithmetic, and CPU multimedia.

The results are very similar to what we saw in Everest. 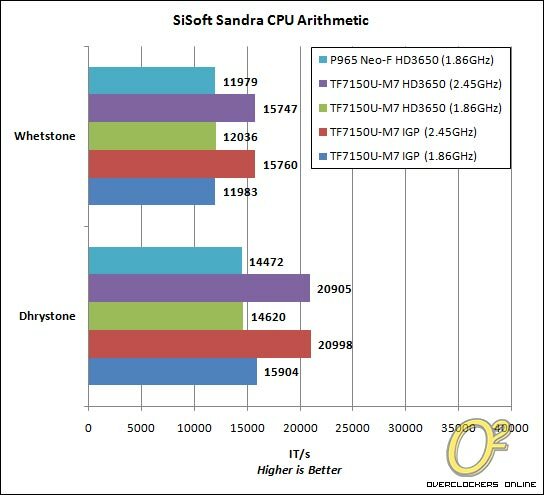 Overclocking seems to have a great effect on the CPU arithmetic and multimedia benchmarks while using a dedicated graphics card as opposed to the IGP does not affect the scores much.

Super Pi Mod 1.5 was used to calculate pi to 1 million and 32 million digits.

While overclocking had somewhat of an effect, it is more interesting to note that using the IGP resulted in a longer time perhaps due to the fact that some physical memory was allocated to it.

The chart speaks for itself in that the results were very consistent all around.

Though neither the TF7150U-M7 nor the GeForce 7150 chip are advertised as good for gaming, I wanted to test the performance.

In the 3DMark results from the previous page, we saw that using a dedicated HD 3650 card increased the scores greatly. Here is the detailed rundown of the 3DMark06 scores. 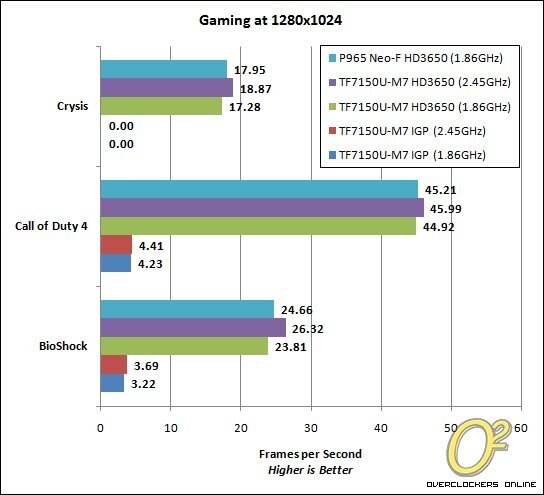 While the HD 3650 had no problems handling the games at medium settings, the integrated 7150 struggled in both BioShock and Call of Duty 4 and it couldn't even run Crysis.

In conclusion, if you plan on playing games, invest in a decent dedicated video card as the GeForce 7150 is not going to cut it.

I haven't had much experience with LGA775 motherboards but the Biostar TF7150U-M7 has not failed to impress. By combining a nice set of features with an attractive price, Biostar's T-Series will be getting another recommendation from Overclockers Online. HTPC enthusiasts will be pleased with this board thanks to its integrated GeForce 7150 chip which features HDMI output.

Though the 7150 leaves a lot to be desired in terms of gaming performance, it should be able to deal with video and multimedia just fine when it comes to using it in a HTPC.

All things considered, I would highly recommend the Biostar TF7150U-M7 if you are looking for the best value.

Overclockers Online would like to thank Biostar for making this review possible.