Last spring, SilverStone paid a visit to Overclockers Online with their Olympia series 1000W power supply, and my was it quite the unit. Substantial would be the word to describe it, in terms of price, performance, and well, size. While in performance, the Olympia 1000W stood very well against the other goliaths of the power supply market, its physical size was a restriction. Measuring in at 22cm long, the Olympia 1000W unwittingly isolated quite a fair portion of its potential consumer base.

At the risk of inspiring images of cute critters throwing fire and lightning at each other while evading those tilted baseball cap wearing 'trainers', the Olympia 1000W has evolved into the Olympia 1000-E, or OP1000-E. 'E' for evolution that is.

SilverStone produces a massive line of power supplies for a wide range of consumers; the silent folks, power users, industrial workstations, and redundant units. The Olympia series of power supplies is geared towards the industrial workstations, or in other words, designed to take quite the beating from both in terms of load and an operating in less than idea environments.

SilverStone is by no means an old company, founded in 2003, they have planted themselves in quite firmly as a top quality provider of power supplies, enclosures, cooling and home multimedia center products. SilverStone prides itself in providing the highest level of quality in design and manufacturing. So, with that being said, the OP1000-E has quite a bit of weight on its shoulders and the bar has been set quite high.

Here is what SilverStone has to say about the new OP1000-E:

Notice, a whole 7cm has been taken off the unit, reducing the overall size of the unit down to typical ATX specifications.

The OP1000-E comes in a fairly typical cardboard box, nothing too flashy, but it gets the job done. 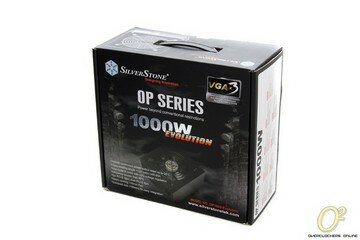 Towards the sides of box, we have a quick rundown of key features.

On the bottommost side panel, output specifications.

Removing the unit from the package, SilverStone has included along with the power supply, cables, screws, a manual and a power cord.

The OP1000-E is finished in basic, yet classic matte black accented with a matching matte black fan grill, black sleeving and topped off with black heat shrink.

The large 120mm fan on the bottom of the unit should do an excellent job acting as an exhaust for the computer system, and cooling the power supply by drawing air from the case into the power supply and then through the perforated black end. 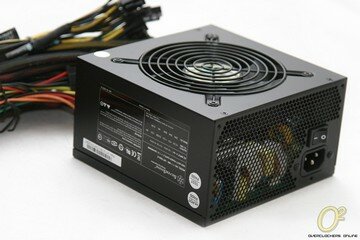 As mentioned earlier, the Olympia series is an industrial grade workstation power supplies, and as you can imagine, it comes with lengthy leads and quite a number of connectors.

For hard drives, we have two lines of SATA connectors, three on each line totaling six.

And finally, six standard 4 pin peripheral connectors along with two floppy drive connectors for those who are unfortunate enough to still be using them, or those with drive bay devices.

Cracking the unit open, the insides are fairly different compared to its predecessor, the OP1000, the OP1000E has sided with a much more typical layout. 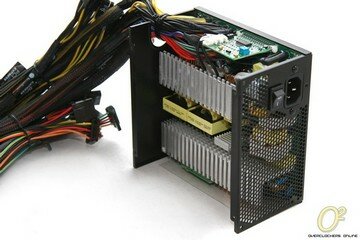 Inside, we have an assortment of Teapo and TK branded capacitors.

Quite unlike any other PC component, properly evaluating a power supply involves much, much more than running a battery of tests or sitting down in front of a shooter for a few hours armed with a pen and a pad of paper. Although, we have the utmost appreciation for a few headshots coupled with explosions, power supply reviews call for much more. The general mantra for testing power supplies tends to fall somewhere in the ranges of loading the power supply up to the top, and letting it suffer. We here at Overclockers Online are inclined to agree. Accordingly, our testing methods have evolved to allow for more sophisticated and accurate testing. 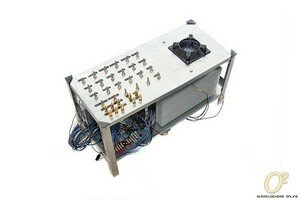 The dilemma here is: how to test a power supply without a computer system, but emulate a computer system? It is important to not forget that as much as we try to part from throwing a power supply into a computer system and watching how it performs, ultimately, what we are distancing ourselves from is precisely what we are trying to replicate. Simply, the ideal testing platform would be indistinguishable from a computer system, but graced with the accuracies of an adjustable load. However, since do not have access to state of the art testing equipment, or the funds to purchase such equipment, we have built a custom load tester. While it does not offer adjustments in the thousandths of a decimal place, it does offer enough flexibility to test current day power supplies and beyond. 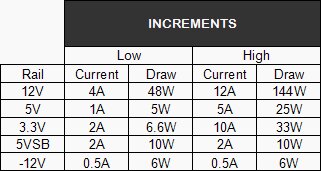 Using thick high quality 16AWG wires throughout and equally high quality connectors and switches, we have sought to minimize resistance in the lines while maintaining flexibility. All it takes is a flip of a switch to turn a desired resistor on or off. 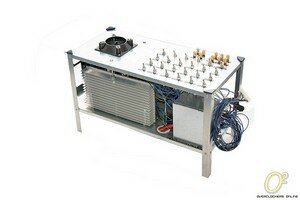 A proper electronic load is a start, but we are going to be a bit more ambitious. A keystone piece of our testing mythology is the heat box. A system drawing 800W from a power supply produces quite a bit of heat, and to be testing such a power supply in an ambient environment is not only inconsistent with in-system applications but unrealistic and misleading. Our hotbox consists of nothing more than a case graciously donated to us from Silverstone. Recycling heat produced from the load tester using a series of controlled fans and a duct, we can control operational temperatures and push a power supply to its limits, or over. 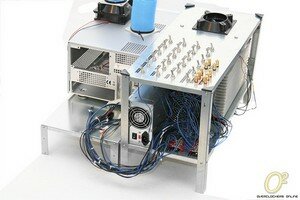 While the purpose and effects of 'burn in' are debated, doing so causes no harm. Prior to any testing, all units are run for a maximum period of one week without load. At best, this will stabilize the unit; at worst it takes a few hours off the unit's total life span. 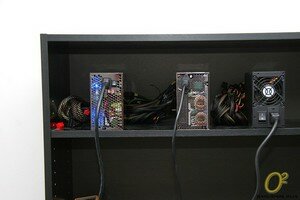 In our tests, we will do our best to adhere to ATX specifications including cross loading and criteria for testing. The presentations of our results are designed for ease of interpretation and conciseness.

So, without any further delay, let us get started!

The aim of the cold test is to reflect ideal operational conditions where heat from the computer system is independent from the power supply. Still though, the term cold test would be misleading as things do get quite hot! 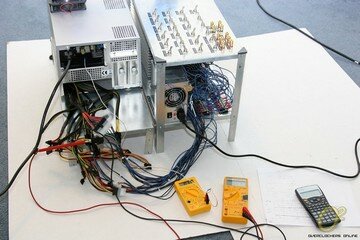 Next, time for the heat.

Much of what we saw in the first three set of tests was repeated here in the hot tests. One thing worth mentioning, however, is that this unit is quiet. At 1000W, the OP1000-E's fan churned up the speed, but remained faint.

Having a look at the OP1000-E at full load on a bar graph, the similarities in performance are much more apparent, heat barely brushes performance. 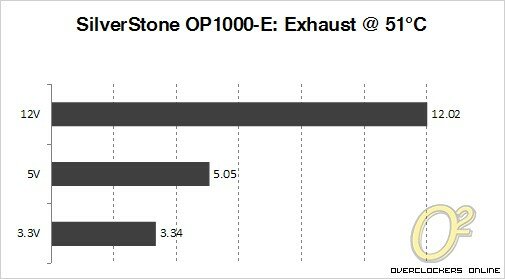 As much as we would like, it isn't possible to compare how the OP1000-E stacks up against the OP1000 as our testing methodology has evolved from masses of peltiers to a much more refined load tester, however, our numbers from this review speaks volumes, and the OP1000-E is a stellar unit. And while we cannot compare performance, what we can compare is size. 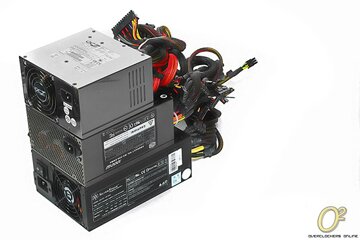 For sake of comparison, the Olympia 1000W was at a time, perhaps the largest consumer PC power supply. While the original OP1000 would have not at all fit into our load tester, the new OP1000-E fits easily. 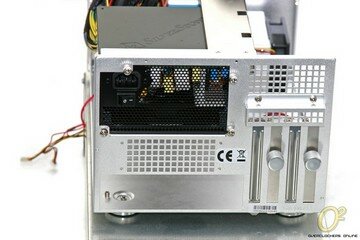 And, with plenty of room to spare. 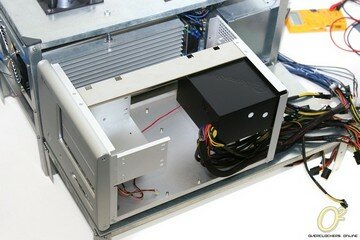 Has the OP1000-Evolution lived up to the original OP1000's good name? You bet. All around, the new OP1000-E is a solid performer. Line regulation is top notch, the unit is incredibly quiet, the lines are sleeved and finished. There is a large number of connectors and the unit is now conveniently sized, unlike its lengthy predecessor.

The OP1000-E has given us quite a unique insight into the turbulent power supply market. Last spring, when SilverStone came knocking at our doors with the OP1000, the market price of the unit sat comfortably at a staggering mid $300 dollar range. Even though the OP1000 was priced at the upper end of similar high end gazillion-watt power supplies, considering how the new OP1000-E is priced modestly at around $200 dollars says quite a bit.