Samsung makes another return to Overclockers Online but this time we get the luxury of reviewing the
Samsung BD-P1500
Blu-ray DVD player. This is not Samsung's first Blu-ray player as it's the 4th generation model and there have been significant improvements over this model and the BD-P1400, the model replaced by the P1500. The P1400 had average performance and we'll soon see if the P1500 has solved all of those.

The BD-P1500 arrived in its retail form and clearly well used. It appears the package has been well used by Samsung but that shouldn't affect how the BD-P1500 performs. Unlike most Samsung products, including the LN40A650, the BD-P1500 actually comes in a full color box! The front of the package clearly shows the face of the player and the fact that it's a Blu-ray disc player. 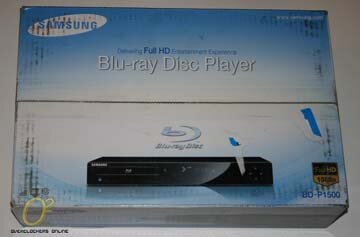 One side of the package gives another look of the player and the other side gives a rundown of the features and specifications.

A simple package for what seems to be a very simple product. Let's take a look at the specifications to see what I've gotten myself into by agreeing to this review!

As the fourth generation Blu-ray player, Samsung has definitely learned from its mistakes and made significant improvements. Starting with the product page we quickly see how Samsung markets the player: BD-P1500 – truly amazing picture quality. Those are very bold words and I'll be the judge of it.

From the press release issued, this player was only made available in June 2008 and it comes with several noteworthy points:

Fourth-generation Blu-ray Player As the first company to introduce a stand-alone Blu-ray player, Samsung reinforces its support of the Blu-ray format with the Full HD BD-P1500. An ideal player for anyone who enjoys Blu-ray, DVDs or CDs in their home, this groundbreaking model takes the home viewing experience to the next step and accommodates all of these formats in one unit. What's more, it can upconvert standard DVDs to 720p, 1080i and 1080p resolutions and offers Full HD video playback capabilities for a crystal-clear picture.

Designed with fans of multimedia technology in mind, the BD-P1500 easily connects to other digital peripherals through an HDMI 1.3 port with CEC for expanded color delivery and easy home theater control. With its built-in Ethernet connection, users can quickly take advantage of BD Profile 1.1 interactivity and download the latest firmware upgrades and more with just a click of a button. Making firmware upgrades simple and easy, Samsung allows consumers to continually upgrade their BD-P1500 with the latest features.

True audiophiles will love the BD-P1500 as it goes beyond standard Dolby Digital and Dolby Digital Plus audio playback to include 7.1 PCM, Dolby TrueHD, DTS-HD High Resolution and Master Audio, Bitstream audio output via HDMI and more-making for a truly immersive viewing experience for movies, gaming, sports and more.

All of these key points are delivered in the specification. 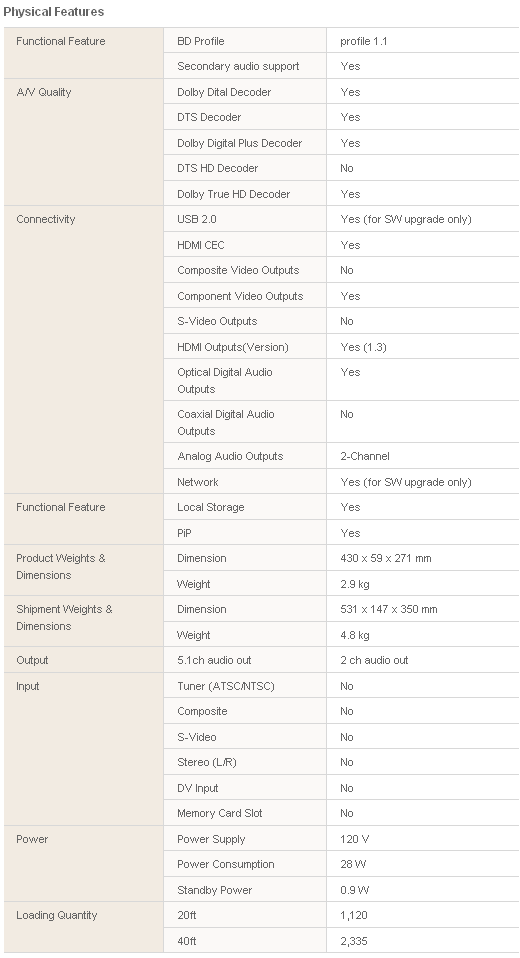 For your information, HDMI 1.3 is said to offer significant improvements in terms of bandwidth. This allows for better color, broader color space, new mini connector, lip synching and support of additional lossless compressed digital audio formats. You can dig up some more information on HDMI.org.

The BD-P1500 is listed as a Blu-ray Profile 1.1 player, but it does have the mandatory internet connection capability required for Profile 2.0. It has also been reported that in October, there will be a firmware that provide DTS-HD Master Audio decoding and Profile 2.0 support. How they plan on providing 1GB local storage capability is beyond me if player doesn't already have it.

The official press release gives the BD-P1500 an MSRP of $399 but you can easily find it for $299 or less at your local brick and mortar store.

Finally the dimensions of the BD-P1500; it's significantly larger than the outdated DVD players you can pick up at Wal-Mart. This player is 43cm long, 27cm deep and just about 6cm tall.

With the specifications covered, we'll unpack the player and get it ready for use.

The BD-P1500 is well protected with soft Styrofoam and a plastic bag. 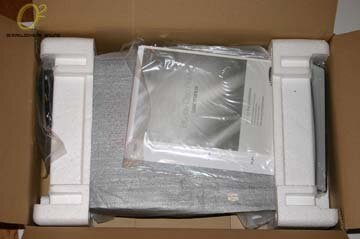 I was disappointed not to see an included HDMI cable. They cost a fortune to buy at regular price and should be a standard accessory, few of us with Blu-ray players are going to need component video cables! As well, you really won't get ‘truly amazing picture quality’ on component video cables. Get with the times Samsung and live up to your words.

The BD-P1500 has a glossy front and a flat black exterior. It's very low key and that's perfectly acceptable for a Blu-ray player. 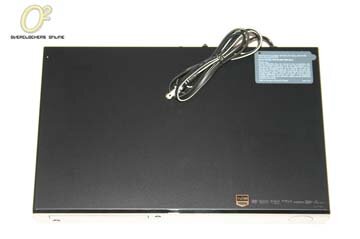 Staring at the face of the player, the left side has been reserved for the Blu-ray player itself. The middle has a timer to keep track of playtime and the right holds a small control pad.

You can see some etching done on the body of the player to inform buyers what the unit is capable of. A sticker is used to indicate some of the limitations. None of this comes as a real surprise to me. It would be great if the player was able to decode DivX or Xvid files in addition to the formats listed.

At the back of the player we see the available inputs and outputs.

Samsung included the classic AV out in case you happen to have an aging but still very functional 50′ CRT. There's no S-Video out. Overall, the connectivity is there but pretty weak overall.

One of the beauties the BD-P1500 is the inclusion of Anynet. Through HDMI, I can use the remote control from the LN40A650 to control the BD-P1500. 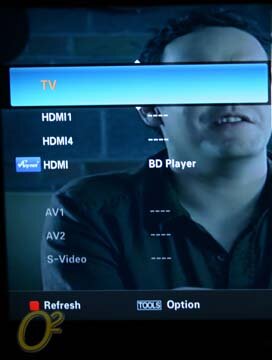 If you don't have an Anynet capable TV, you'll need to use the included remote control. The design has been in existence for quite some time. It works perfectly fine and the only addition I wouldn't mind seeing is a backlit keys or a light option like in the LN40A650 remote control.

There's absolutely no doubt in my mind that the quality of Blu-ray is superior to that of a DVD or HD. I captured a couple pictures of what movies look like with Blu-ray. The player was connected to the LN40A650 that was recently reviewed. 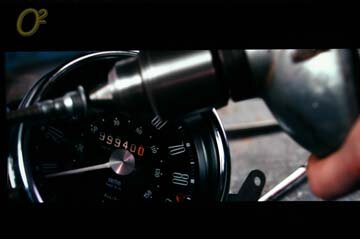 While watching ‘The Bank Job’, I didn't experience any abnormal video or audio. So while it appears the BD-P1500 is a great player, it still isn't perfect. I found that once a Blu-ray disc is inserted, it takes a few seconds before the menu is loaded. As a matter of fact, it can take up to a minute or two depending on the movie. The sluggish performance takes some of the fun out of entertaining guests with the BD-P1500.

I also tested the Blu-ray player with a couple regular DVDs from the store and ones I made myself. Both worked perfectly fine and when comparing the picture quality and playing performance to a standard DVD player, there wasn't much of a difference. Clearly the inclusion of Blu-ray support doesn't take away from standard DVD playback.

Operationally, there was one occasion where I had to eject the disc and put it back in before the menu loaded. It may have been a fluke but it's worth pointing out. As well, the fast forward isn't all that fast. I found skipping chapters or to the menu extremely difficult.

Samsung's fourth generation Blu-ray disc player appears to be a huge success. It's not nearly as expensive as buying a PlayStation 3 but some will argue that the PS3 has superior video out. I can't judge since I don't have a PS3. Given the time I've had with the BD-P1500, I'm eagerly awaiting for my favorite movies to come out on Blu-ray. The playback is great and the problems I experienced were minor in the grand scheme of things.

As the market begins to mature, it'll be interesting to see how the market responds to standalone Blu-Ray players and what Samsung will do to maintain and grow its market share against companies like Sony and there Playstation.

Overclockers Online would like to thank Samsung for making this review possible.

Related Links
and enjoy your favorite movies right at the comfort of your own home.