Today we welcome Diamond Multimedia to Overclockers Online for the first time. Diamond MM is a company that has been around for over two decades producing various multimedia devices from video cards to MP3 players. Ownership of the Diamond name and products has changed through the years. After a short period in the early 2000s away from producing video cards, Diamond reemerged in 2003 and they are once again a strong player in the graphics card market.

Recently we have had quite the influx of ATi's offerings here at Overclockers Online and today I am taking a gander at the Diamond Multimedia Radeon HD 3650 with 1GB of memory. Will an additional 512MB of memory be enough to separate Diamond's card from other 3650 offerings?

As we are prone to do, let's first take a look at the package.

The 3650 is enclosed in a gray box with a cut out in the center showing you the video card inside. Everyone should know ATi's Ruby by now; she graces the cover along with the product name and amount of memory on the card.

In a slightly different approach than other 3650 packaging, Diamond doesn't heavily advertise this 3650 as a gaming card. Most of the back largely promotes the media capabilities of the HD 3650. The xDNA logo towards the bottom lets us know that this card is able to support CrossFire on any chipset with two PCI-E x16 slots. On the lower left is a small box showing some various features that are supported and one nice little feature aimed at retail outlets. While the majority of our readers will know the difference between AGP, PCI and PCI-E, Diamond includes a picture of the PCI-E slot to help those that may not be as technically literate with the different expansion slots.

The sides list out features and specifications which we will cover in the next section. 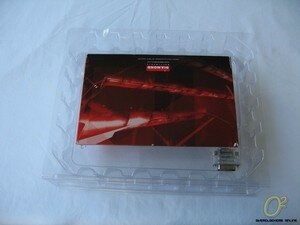 Removing the outer box, the card is enclosed in a plastic shell with a small envelope and DVI-to-VGA converter. Accessories are light including only a driver CD, quick start guide and the aforementioned adapter.

For specifications and features I grabbed them straight from Diamond's site here.

Similar to the PowerColor AX3650 I reviewed earlier, Diamond's card also uses DDR2 so CrossFireX is only supported through the PCI-E bus. One slight discrepancy on the specifications is that the memory is listed at running 1000MHz (500 x 2) though in reality it is running at 800MHz (400 x 2).

OK, time to move onto the card itself. 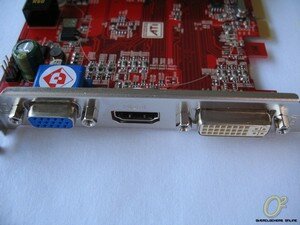 The card includes one DVI, one HDMI and one VGA port. A nice selection to cover most anyone's display needs. It's nice to see an included HDMI making this a nice choice for media center PCs. 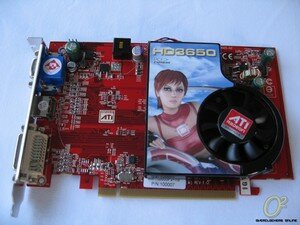 The heatsink and fan combination is fairly simple, though larger than the stock one on the cards with 512MB. No PCI-E power connector is needed since the PCI-E bus provides enough power for this card.

Nothing too spectacular here, aside from noting that the four memory chips on the back do not receive any cooling. 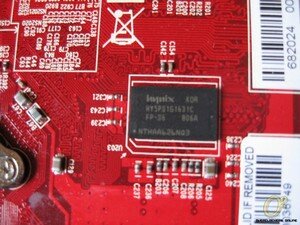 Taking a closer look at the memory we can see the model number HY5PS1G1631CFP-S6. Doing a bit of a search of Hynix's website, I found the specs here, we see that the memory is rated for a maximum of 400 x 2 or 800MHz DDR. 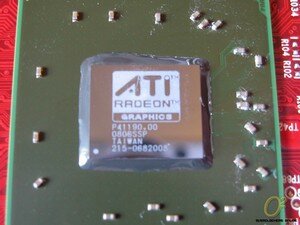 The RV635 chipset is manufactured on 55nm technology, so it is small and as we have seen it runs pretty cool.

Like the other HD 3650s reviewed here at Overclockers Online, installation should not bring any issues. 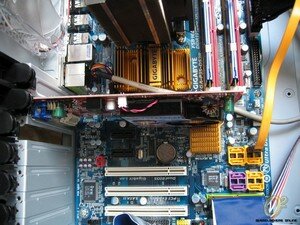 Since the card is shorter in length than the higher end cards, it shouldn't interfere with anything on the motherboard or in most ATX cases.

As I mentioned earlier, Diamond's site lists the memory at 1000MHz but you can clearly see that it has a default of 800MHz (400 x 2). Also there is a slight discrepancy in what the card is running at and what its defaults are.

This same discrepancy shows in Rivatuner 2.08 as well.

While overclocking on the 3650 surely isn't a deal breaker, I have to this point been unable to even unlock any sort of overclocking on Diamond's HD 3650. We have opened a communication with Diamond and will update this section as well as benchmarks with any updates on this. 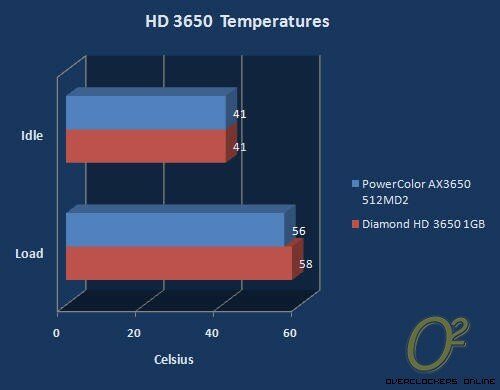 While I wasn't able to overclock Diamond's HD 3650, stock temperatures are pretty much inline with the PowerColor AX3650's numbers.

All benchmarks were run a minimum of three times with scores being the average of those three runs. For efficiency's sake I am going quote a bit from my previous testing of the PowerColor AX3650. 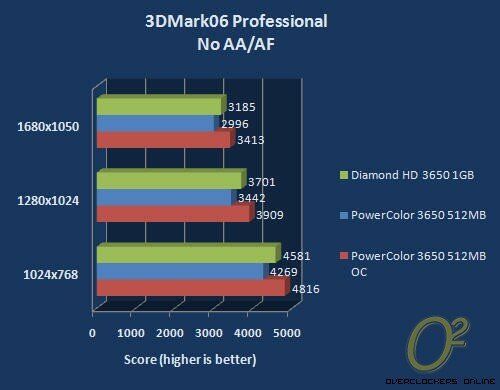 I have to say I was surprised by the results, as I expected them to be pretty even at stock settings but the Diamond card manages to edge out PowerColor's offering. However with the overclocking on the PowerColor AX3650 it easily takes the lead.

Next up is FarCry. While it may not be the cutting edge game right now, it was when it first took gamers by storm. However, it still is a good test for new video cards. All settings were put to their maximum with 8x AA and 8x Anisotropic filtering. I used the built in timedemo on the Regulator map.

FarCry shows pretty much a mirror of the 3DMark06 results. At stock speeds the Diamond HD 3650 1GB edges out the 512MB card, but it cannot match up with the overclocked card.

Next up is Half Life 2: Lost Coast. I expect decent numbers from the 3650 as the Half Life 2 engine is one of those rare games that scales well with almost any hardware. Settings were all set to their highest with 6x MSAA and 16x anisotropic filtering. 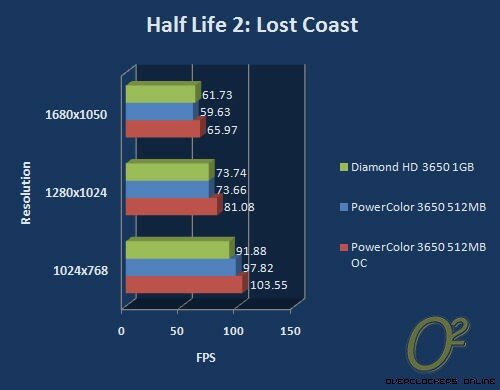 We finally have a bit of a change as Diamond's card gets edged slight by the stock clocked AX3650 at the lowest resolution.

Page 9 : Company of Heroes and Crysis

Next up for testing is Company of Heroes. I used the game's built-in performance test with all settings at their max. 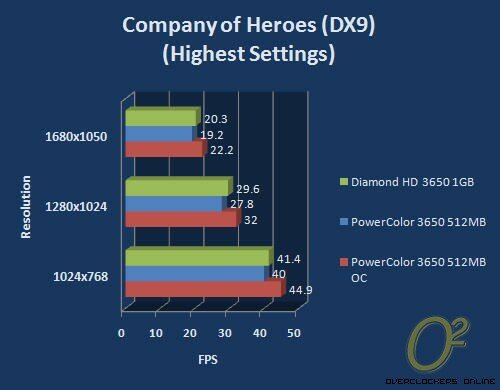 And order is once more restored as the Diamond card edges out the AX3650 again.

Crysis really needs no introduction as it was perhaps the most anticipated game graphically last year and still continues to punish even high-end video cards. All details were set to high with no AA. The included GPU benchmark was run and average result was taken. 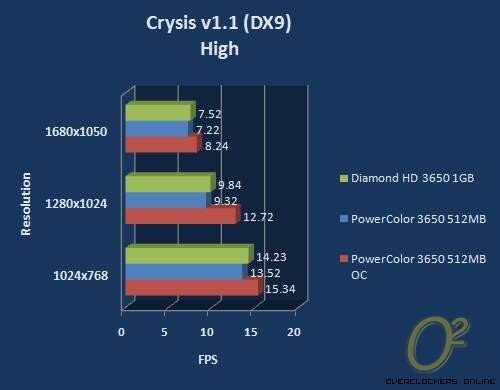 Finally ending with Crysis the status quo continues. While the Diamond card edges out the AX3650 in all the tests, aside from overclocking, its quite apparent the additional memory has little effect on the performance.

So in the end what do we have with the Viper HD 3650 1GB? Much like other 3650 cards, you get a pretty good performer packed with features for a low price. The inclusion of native HDMI-out is a big plus for anyone running a home theater PC setup, but others are not left out with VGA and DVI connections as well.

So while it is another good 3650 card, I just can't see the benefit aside from marketing to add the additional memory to make 1GB. I'm sure with prices being so low on DDR2 these days, it's sort of a no brainer from the marketing department, but performance-wise no 3650 will ever be able to run a game at resolutions to warrant the extra memory. So while there is about a $20 premium for the 1GB card, the inclusion of HDMI onboard can make up for some of that difference in price.

The inability to overclock the card has somewhat perplexed but I am leaning towards it being an issue with my specific card, though I will update this review when and if the issue is resolved with Diamond. This slight issue really can't be considered a negative for this class of card and it iss another solid offering of ATi's 3650 model.

Overclockers Online would like to thank Diamond Multimedia for supplying the Viper HD 3650 1024MB for review.