A more technical way to analyze picture quality, but not as fun as sitting in front of the TV for hours upon hours to come up with a qualitative value is to use a quantitative program to judge against a benchmark. In this instance I used X-Rite: iDisplay 2. Originally designed for monitors (CRT and LCD), I’m using it configured for LCD displays. I’ve configured the TV to take the input signal from my HTPC and will adjust the backlight, contrast and brightness on the TV to see how far off the TV settings are away from the iDisplay 2 ideals. The software takes about 10 minutes to run and I was amazed how little modifications were required to meet what iDisplay 2 says is calibrated. 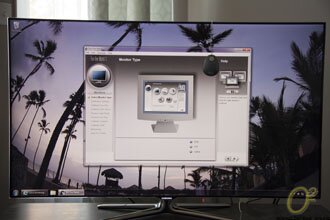 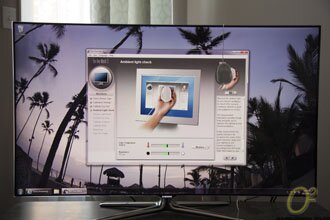 Based on the settings of X-Rite, my room conditions were good and I didn’t need to adjust the brightness or contrast ratio. Depending on how much light you have in the room, you may need to increase the backlight a tough. X-Rite did make some minor adjustments to the color profile. You can see with the exception of the lighting in the picture making one image brighter, the before and after photos don’t show too much of a difference – it’s hard to see in the pictures below. 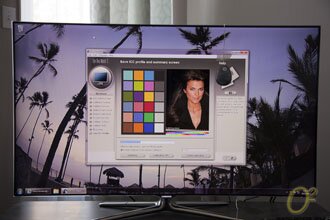 Power consumption is something I consider when purchasing any new consumer electronics. The last thing I really want is to purchase a TV that continually drains my wallet with a power guzzling 600W usage. I want my TV’s to be reasonable with power draw, the lower the better but I won’t sacrifice picture quality to reduce power consumption. To test the power draw on the UN55ES7100 I will consider the case of the TV watching a movie. I also checked the power draws while watching TV and in the different display modes.

Here is the power draw:

With the UN55ES6500, I was impressed with how little power is drawn by the TV and the UN55ES7100 is equally impressive. With the Energy Star Standard Mode the draw typically falls between the 45-60W level, a lot of this is a result of the micro-dimming. Some people may find this distracting and leaving the picture a bit on the dark side. I personally found the slightly brighter screen to be more attractive and suitable to my typically watching needs. In movie mode the power draw when I watched a movie off my computer was 88W. When watching TV it hovered around 98W. The power consumption is slightly higher than on the ES6500 under these conditions but this can be expected with the dual core processor.