While DDR3 prices are starting to fall, there are still a great number of users out there not willing to take the plunge yet. Though DDR3 is the future, DDR2 isn't going away anytime soon with new performance kits still hitting the market.

While G.Skill was established in 1989 by a group of enthusiasts, they have really made a name for themselves with enthusiasts here in North America in the last few years starting with their DDR kits. Today we welcome them for the first time to Overclockers Online.

G.Skill has recently launched a new series of memory called the PI series and it is with a 4GB kit that we welcome them. The F2-8800CL5D-4GBPI is the 4GB DDR2-1100 variant of this series, with an 8GB kit also available. Read on to find out exactly what this kit brings to the table.

We'll start with the packaging which is rather soft-spoken and unassuming. 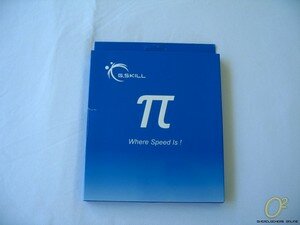 G.Skill opted for a blue that sort of fades to a light blue towards the bottom. The front is adorned with the large white symbol that just about everyone should recognize: the symbol for Pi. Aside from this symbol you get the company name and slogan. 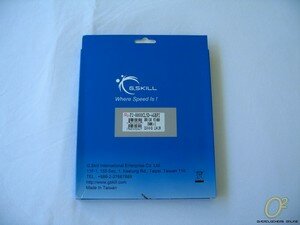 The back of the package is the same solid fading blue as the front. On the back is the model number and quick hitting specs in the middle. The bottom has the company address and website. 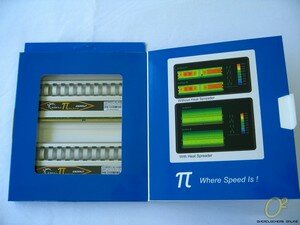 Opening up the front flap there is a window with a view of the memory inside the box. On the flap is a graphic explaining the thermal benefits of the heatspreaders.

The only thing included aside from the memory is a small sticker of a snowboarder with the G.Skill name on the board.

The memory sticks come packaged inside a plastic shell that is thankfully not heat sealed and is easy to open. 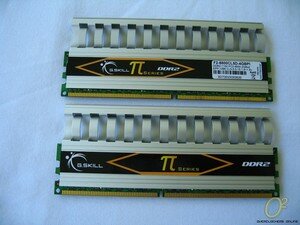 As you can see the heatspreaders nearly double the height of the modules and that could be an issue for motherboards that have memory slots close to the CPU socket. Each module has a sticker that gives model number, speed ratings, timings and voltage range. 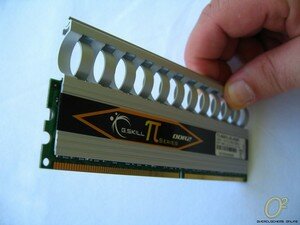 The heatspreaders have a sort of intertwined top that should help to create turbulence and dissipate heat. Unlike a lot of heatspreaders that are one piece, you can see that these are clearly two separate pieces that are connected with a sort of hinge.

For specifications and features I grabbed them straight from G.Skill's site here. 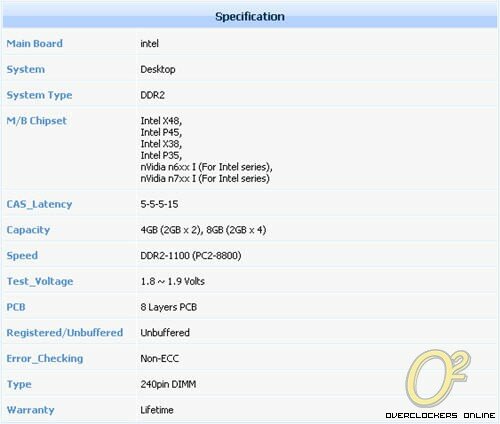 As you can see, this kit is made for Intel chipsets and also comes in an 8GB kit as well. Probably the biggest thing that strikes me from this is the voltage ratings. When most high performance memory requires upwards of 2.0V these days, seeing 1.9V is pretty impressive. If these modules can run at DDR2-1100 speeds at that voltage, I have high hopes that these modules can hit some pretty decent speeds beyond their rated speeds. 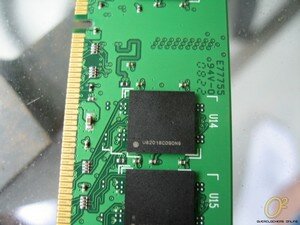 Getting the heatspreaders off is no easy task since they are hinged at the top and sort of clamshell on. However not a whole lot of information is revealed upon opening it up, and a google search turned up no results.

Memory is perhaps the easiest component to install in a PC, but with heatspreaders of this height, interference is the main concern. I won't spend a whole lot of time here, because quite honestly there isn't a whole lot to installing memory. 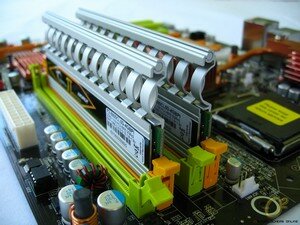 As you can see, the heatspreaders nearly double the height of the RAM and as such could cause some issues with larger aftermarket heatsinks that protrude beyond the stock application.

Seen here with a CoolJag Falcon 92-AL on the Biostar TPower I45, they come close but still do not touch. Any interference will depend solely on the position of the RAM slots on your board in relation to other components such as the CPU or GPU. 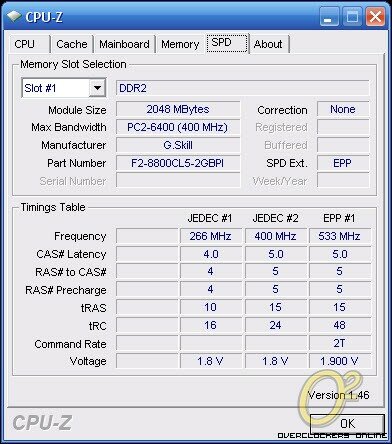 As I mentioned earlier, I had high hopes for this kit since it only required 1.9V at DDR2-1100 speeds. My initial hopes however didn't pan out quite so much and this turned into one of the longest testing sessions I have had yet. To test stability what has been pretty reliable for me has been as follows:

I initially started out testing on the Biostar TPower I45 that I reviewed earlier, but I could not even coax the memory beyond DDR2-1066 speeds without it resulting in errors with a 1:1 divider. What's even stranger than this was how I was unable to get the memory stable at any speed beyond 1066 using any divider. I have sent an e-mail out to G.Skill to try and resolve these issues and will post any updates here as I'm not sure what the root cause is. Therefore, for testing, I turned to my Gigabyte P35-DS3R.

I found that this kit didn't respond at all to increased voltage, and maxed out at 1150 while keeping timings at 5-5-5-15 2T. Keep in mind I decided to keep timings at stock, as I think you gain more with tighter timings than higher bus speeds.

All benchmarks were run a minimum of three times with scores being the average of those three runs. Listed below are the settings used for each test run.

And for comparison I overclocked a set of Mushkin DDR2-1066 to match the stock speeds of the G.Skill kit.

I'm going to start out with some bandwidth benchmarking. 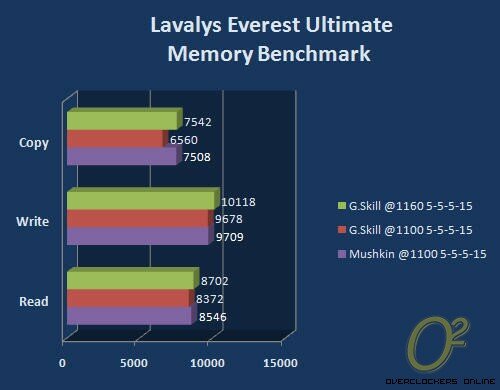 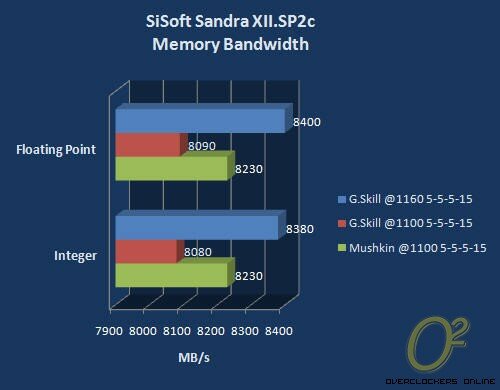 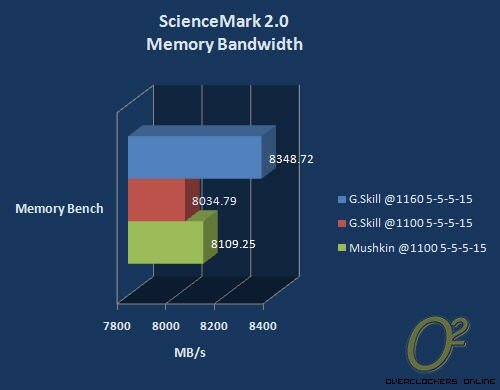 At DDR2-1100 speeds, the Mushkin kit slightly outperforms the G.Skill kit in every benchmark. Surprisingly it also comes quite close to matching the numbers of the G.Skill kit overclocked. 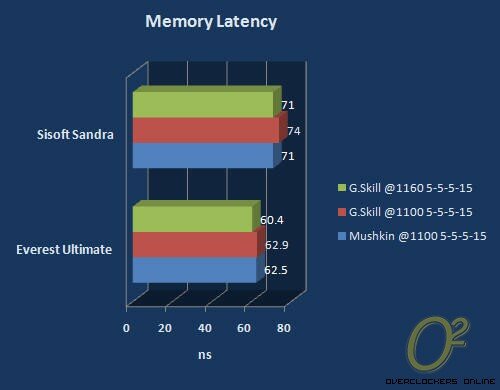 In the latency tests, there is a sort of back and forth. Sandra results show a dead heat between the G.Skill kit overclocked and the Mushkin kit.

Now we will move onto some more system wide benchmarks. 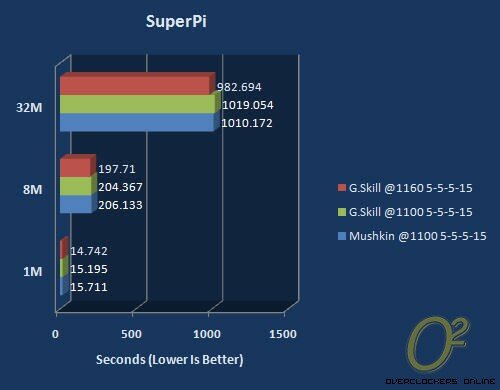 Moving along to SuperPi, you can see that we have similar results to the PCMark05 results with the G.Skill kit outperforming the Mushkin kit in all instances except at the DDR2-1100 speeds and the 32M runs.

To finish things up I'm going to run through some gaming oriented benchmarks. 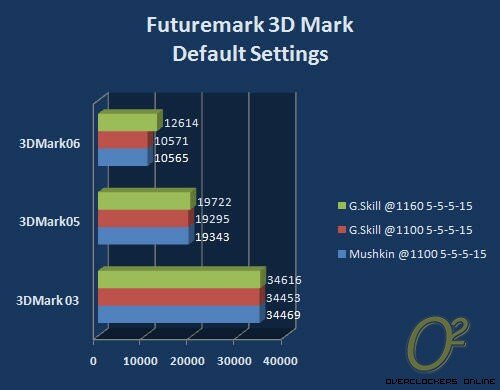 No benchmarking session is complete without some sort of 3DMark results and this is no exception. Results here pretty much follow the pattern we have seen throughout so no real surprises. The only thing of note is the overclocked G.Skill kit seems to pull farther ahead with each newer release of 3DMark. 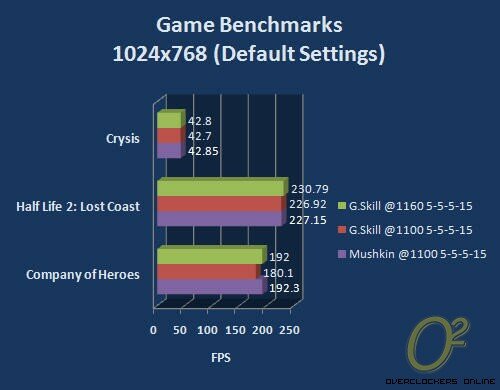 Company of Heroes seems to reflect results from the past tests, with the Mushkin kit matching the overclocked G.Skill kit. The Half Life 2: Lost Coast tests show a virtual tie in all three results. Crysis, at almost no surprise, shows no differences which most likely point to a GPU bottleneck with the 9600GT.

So after countless hours of benchmarking and sweat, where do we stand with G.Skill's F2-8800CL5D-4GBPI memory kit? The F2-8800CL5D-4GBPI is sort of a mixed bag. On the bright side, with stock speeds of DDR-1100 at a miserly 1.9V, you don't have to worry about the memory not having enough voltage while booting up that you can run into with some higher voltage modules. Also factor in a supported FSB of 550Mhz, this kit should make most casual overclockers happy.

On the down side, overclocking wasn't quite what I expected out of this kit as it didn't respond at all to higher voltage and actually seemed to become more unstable if you pushed more than 1.9V into it.

To sum things up, the F2-8800CL5D-4GBPI is a good kit as long as you don't expect too much above stock speeds. However, with attractive heatspreaders and even more attractive prices of DDR2, this is a great kit to add 4 gigabytes of memory for very little dough.

Overclockers Online would like to thank G.Skill for supplying the F2-8800CL5D-4GBPI for review.