NZXT is a popular manufacturer of cases and other accessories aimed at computer hardware enthusiasts and gamers. Based in Los Angeles, NZXT has been at it since 2004 and have definitely come a long way in a very short time.

The humble computer fan is an omnipresent piece of hardware; it serves to cool your components but comes with a caveat: the noise. Fan controllers allow the user to reach a balance between cooling and silence. This is where the
NZXT Sentry LX
comes in, featuring its ability to control up to 5 fans and monitor 5 different temperatures.

The Sentry LX comes in a relatively compact package. The front has a stylized image of the device. It is touted as a ‘High Performance Fan Controller.’

Turning the box over, we have a quick description as well as some detailed specifications. Five boxes, also pictured on the front, show off important features such as the ability to control five different fans and monitor five different temperatures.

Before opening the package, let's take a quick look at the specifications.

From NZXT's website, where you will also find a manual among other things, here is their description:

NZXT, a company built on realizing the dreams of gamers worldwide, is proud to announce the Sentry LX, a high-performance aluminum fan controller.

Sentry LX boasts a robust feature set providing gamers and PC enthusiasts with the optimal setup for monitoring and adjusting temperatures throughout the PC.

And the features:
* Large dual 5.25′ LCD screen
* NZXT designed intuitive control, set and change fan speeds and settings on the fly
* Auto/Manual modes, let the LCD take control or set fan speeds to your liking
* Temperature alarm
* Aluminum finish
* NZXT Designed graphical interface, easy to read and understand
* Saved Settings, calender and fan settings are stored even during system off so settings don't need to be redone
* Supports up to 4Watt per channel
Let's move on to the contents.

Opening the package, we find a well-packed product – a user's manual lies on top of everything.

Sandwiched between two styrofoam blocks, the Sentry LX as well as all the cables are protected further by a plastic bag. 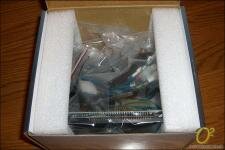 You would expect a fan controller cable of controlling five fans and monitoring five temperatures to have a lot of cables and that is certainly the case.

Taking off the plastic bag reveals all the cables, neatly packed, and a small plastic bag with more stuff.

The back of the controller features a blue PCB.

The sides of the controller are also black, and have several mounting holes.

At this point, I went ahead and installed the battery into the slot on the PCB. The battery allows the device to store the date, time, and other settings. There is also a speaker located on the PCB.

One last picture of the controller's front face, with flash, shows the LCD display itself.

To install the NZXT Sentry LX, you need two consecutive 5.25′ bays, which may cause problems for some users with cases that have separations between the bays.

Connect the fans and place the temperature sensors in the desired locations, and then slide the fan controller in as if you were installing an optical drive. You also need to connect the Sentry LX to a 4-pin Molex power connector.

Once in, you may screw the controller into your case if desired, depending on how your case works.

With the system powered up, the Sentry LX lit up. The time and date were displayed on the left side. The right side featured ten readouts for the five fans and five temperatures. 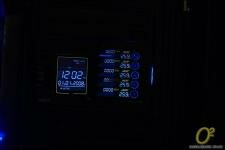 Relative fan speeds are shown by means of a bar under each fan speed display. Since I only connected one fan for the test, only the first display shows a non-zero fan speed.

Pressing ‘Fan Select’ cycles through each fan. The up and down arrows can be used to set the speeds; setting the speed to 0 turns off the fan.

Changing the time and date can be done by pressing ‘Set’ and using the up and down arrows and using ‘Set’ again to scroll through the options.

Holding down the up arrow will change the display from °C to °F.

To reset the Sentry LX back to default settings, press the ‘Reset’ button. I would have liked to see some sort of confirmation for this feature as simply pressing the button will remove any settings you might have spent a lot of time programming.

In order to test the precision of the sensors, I placed all of them in one general area and they all reported the same temperature.

One thing I didn't like about the aesthetics of the Sentry LX is the viewing angle, even when viewed directly! As you can see from the pictures taken in the dark, it is very hard to see the readout clearly since the backlight sort of bleeds through, illuminating parts of the LCD that don't actually correspond to what should be displayed. For example, the sensor 1 temperature display shows ’25.9′ but the top of the number ’5′ is cut off. The same effect can be seen in other places where some numbers appear dimmer than others (the two trailing 0's in fan speed 4). This issue gets worse as you look at the display from an angle, such as if you have the case on the floor and you are looking down towards it.

However, the fan speed controls work fine and the Auto mode is quite good.

In terms of function, the NZXT Sentry LX is one of the best fan controllers I've ever used. It allows unparalleled control with its ability to support 5 fans and monitor 5 temperatures. I was also very pleased with the ease of use. Even a beginner will find that setting up and using the Sentry LX is very intuitive. Also, the black brushed aluminum finish along with the blue lighting scheme is very stylish and should complement most cases.

However, it is not without its faults. The fact that it requires two 5.25′ bays could cause problems for some users with nonstandard case designs. Also, the poor viewing angle of the LCD is definitely an issue.

If you can look past the minor flaws, the NZXT Sentry LX is a good fan controller that should not be overlooked if you're in the market for one.

Overclockers Online would like to thank NZXT for making this review possible.