Founded in 2004, NZXT originally started in the production of computer cases, and even though NZXT has expanded to produce other small accessories, they still keep their roots firm in producing unique computer cases. With the introduction of the Lexa S, I expect this to perform no less than all other predecessors.

Being a mid-sized chassis built for gaming, we'll see if the Lexa S can perform well enough to keep components running cool, and has the looks to top it off.

Looking at the face of the packaging, you see the Lexa S sitting in what looks like an absolutely futuristic factory production line, looking profoundly bold and powerful, with the line ‘Ready for Battle’ prominently standing out in the top right corner. 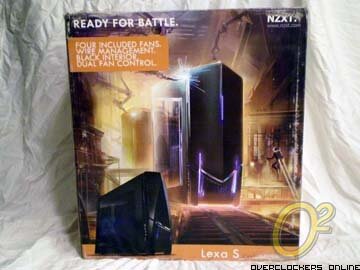 Rotating it 180 degrees, we view all the special features alongside three large images displaying the Lexa S. 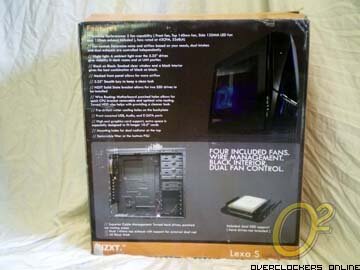 We can see all the specifications of the Lexa S printed out on the last side of the box. 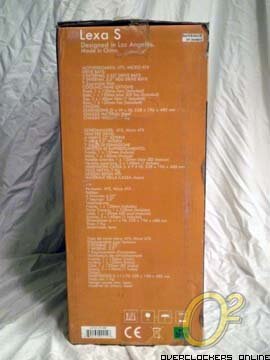 Popping the top flaps of the box up, I pulled the Lexa S out into the world. Its protection is a plastic wrap to protect it from scratches, and Styrofoam caps on the top and bottom. (Note: the Styrofoam on the top cap is broken due to me pulling it out the box. All packaging during shipping remained intact.) 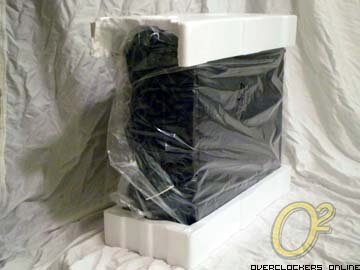 Here she is! With simple plastic covers protecting the high gloss areas from scratches, the Lexa S promptly states boldness with a strong touch of style. 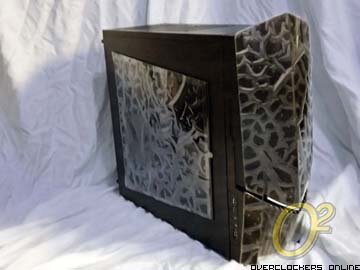 Before we take a more physical look into what this beauty has to offer, let's look at a few features and specifications.

Let me quote the specifications off the side of the box, the same information can be found on NXZT's website:

These features are found on the rear of the packaging:

That's a plethora of features, for sure! Several features, such as the ‘motherboard punched holes allow for quick CPU bracket removable’, high fan capability with dust filters, and a clean look stand out for me personally. All of the other features are very welcomed as well.

Now that we have that covered, let's head over to what we've been waiting for – the close up shots.

Here we have the left side of the case, where I believe most of a person's attention will be. The 120mm fan on the side has some particularly nice blue LEDs in it, and to top that off, it's set in a smoke-grey tinted window that does an excellent job at showing off your shiny hardware. In addition, you can see dual USB ports, audio jacks, and an eSATA at the bottom right. While the possibility of having 4 USB ports is out there, along with a Firewire port, the Lexa S is still satisfactory here.

The right side is as unassuming as the left side is attractive, so let's move along to the top.

Here we see two fan exhaust openings that can accommodate 120 or 140mm fans, and as we can see NZXT has factory installed one 140mm fan for us already. 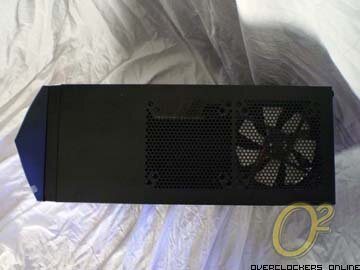 Flipping the case to expose its underbelly, two nice features are exposed to us – the first one being a removable dust filter for the power supply, and the second being firm plastic feet with rubber preinstalled on the bottom. Unfortunately, one of the rubber pieces seemed to be missing. 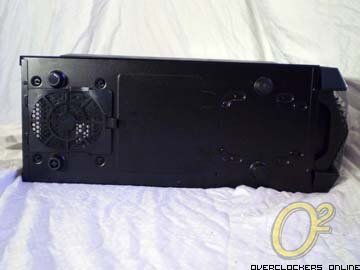 Here we have the back. The first thing that caught my eye was the nice mesh covers for the unused expansion slots where, where you would typically see just a metal plate covering the slot. Other than that, we see two water cooling tube holes, a 120mm exhaust fan and extra ventilation holes beside the expansion slots. The large thumbscrews holding the side panels in place are also a very welcome inclusion. Note that the power supply is mounted on the bottom. 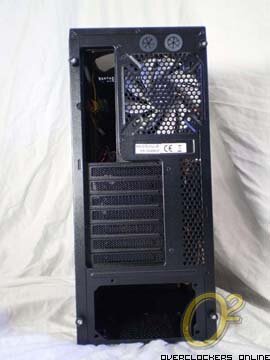 Looking at the Lexa S head on, the first thing someone would notice is its glossy, piano-black surface. While this is very attractive, it is also the worst fingerprint/scratch magnet I can think of. On the bottom we can see ventilation holes, which are used by another 120mm fan to cool the hard drives inside. On the face of the door, there is a ‘nightlight’, as NZXT calls it, which glows blue when powered, and a green hard drive activity light directly below it. 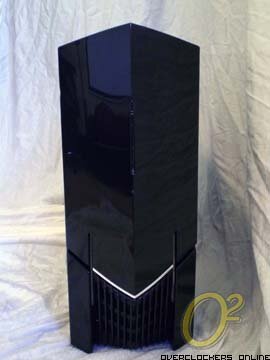 Giving the front door a light pull, it releases its appropriate magnetic grip and swings open with ease. Revealed to us here are four 5.25′ drive bays, with a smaller bay for a 3.5′ drive, such as a floppy drive. The power/reset buttons are as firm as they are shiny, and below them we see two fan controllers and the NZXT logo. Each fan controller can control two fans, allowing you the control of up to four fans. 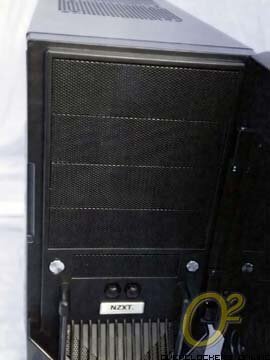 Let's pull that side panel off now and get even more personal.

Supplied in a small cardboard box nestled in the hard drive bays, we are given the appropriate multi-language user manual, chassis, motherboard, and 5.25′ and 3.5′ mounting screws, hard drive mounting rails, and a 3.5′ to 2.5′ adapter.

Before we really move in, here is a quick shot of the left side and right side.

Notice all the cable management capabilities, from long rubber grommets to notches for threading zip-ties through. 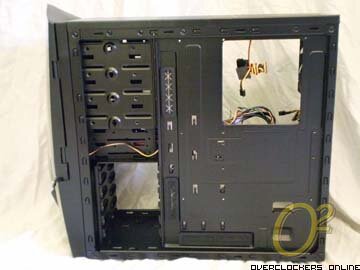 Looking closer, we see that the Lexa S has room for five hard drives in the lower bay, and space for an additional two above that, although one would then take the place of a floppy drive, if someone was still inclined to install one.

Moving farther up, four 5.25′ bays present themselves. What I realized later, however, is that if you want to install an optical drive in the top bay, you will not be able to install an additional 120 or 140mm fan behind it for extra exhaust power. 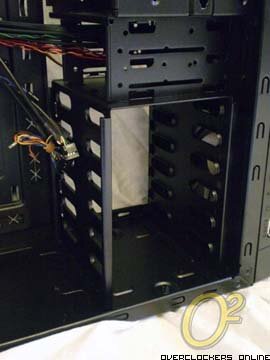 At the back of the chassis, we are again presented with the 120 and 140mm fans. 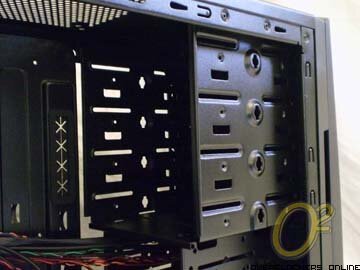 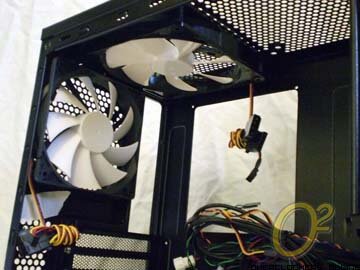 Last but not least, we are presented with a plethora of fan headers and front I/O headers. Here we have four fan headers (remember the two fan controllers on the front), three power connectors for the LEDs and fan, two USB headers, headphone and mic headers, an eSATA cable, and the appropriate connectors for the power button, reset button, etc.

It's always a good idea to go for a quick run through the interior. Everything seems attractive and up to snuff here, so let's install the components and see if it runs just as well!

First off, I installed the bronze motherboard standoffs and rear I/O shield. To install the standoffs, I literally had to use a pair of pliers to twist the threads into the holes; it seems that the black paint used on the interior filled the holes in.

Mounting the motherboard and power supply was a simple task; nothing tricky.

Included with the Lexa S is a 2.5′ to 3.5′ adapter, targeted towards to SSD crowd. For the sake of the review, I used a notebook hard drive I had sitting around. Simply mount the hard drive into the bracket using the supplied thumb screws, and slide it into its bay with a nice click.

To install an optical drive, all one must do is pop a mesh cover off the front, slide the drive in, and screw it into place with the thumbscrews. 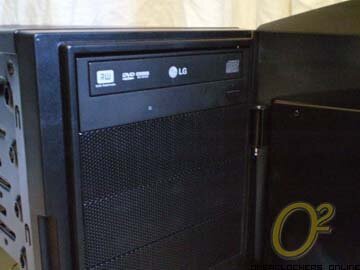 Moving over again, I installed the expansion cards, which is a simple procedure of removing the plate, inserting the card, and screwing it into place. Unfortunately, NXZT did not include thumb screws here. 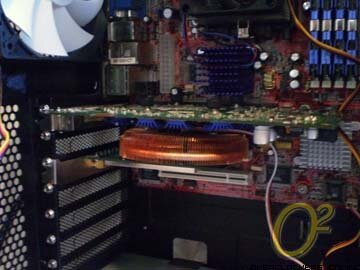 All done! Placing the side panel back on and hitting the power button, the Lexa S literally glows. I find it's an attractive piece of computer art. 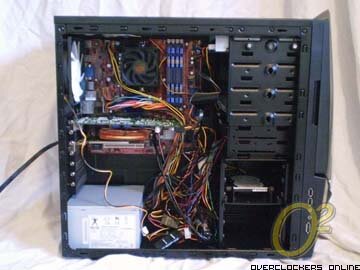 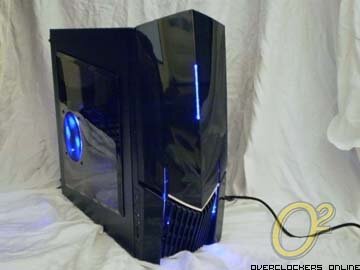 Installing the parts was a simple task in the Lexa S. There were no sharp edges, cramped corners, or awkward lengths for cables. This is a big plus to the inexperienced, or even the experienced, piecing together a system. However, an attractive set-up can easily get shot down if it performs poorly…let's check it out.

The following system configuration will be used to test the Lexa S' cooling capabilities:

For the test, I will allow the system to idle for 3 hours. Temperatures will be recorded. Then, I will stress the system with 2 instances of SP2004 for another 3 hours, and recorded the temperatures again. The Lexa S will be tested against the following competitors:

The Cooler Master Cosmos has proved to me to be an impressive performer in the past, and I thought it would be fitting to compare the Lexa S to it. The nMedia BAV280, however, is in a league of its own, as it is a home theater chassis, not a performance/gaming chassis. But it is still good to compare, nonetheless, to show where the Lexa S stands in correlation with the two. 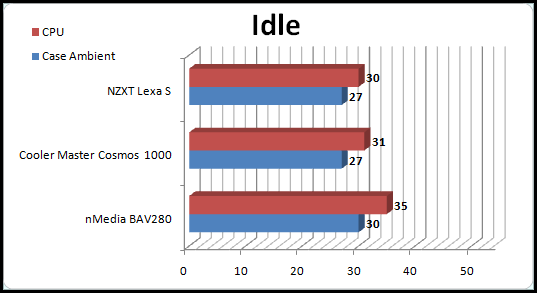 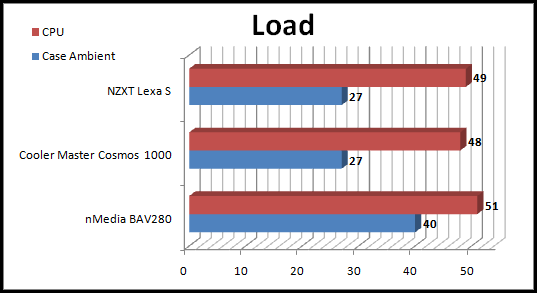 The Lexa S is virtually equal to the Cosmos when idling, but falls behind a degree when under stress. The nMedia, on the other hand, idles 5 degrees hotter, and when pushed, heats things up 11-12 degrees more than the Lexa S or Cosmos. As for ambient case temperatures, the two leaders stay a constant four to five degrees hotter than the ambient room temperatures, and continue this constant under load. Again, the nMedia case falls behind here, but as previously mentioned, that is expected.

I knew the Lexa S would be a strong performer the moment I laid eyes on it. With the inclusion of 4 case fans, NZXT gives its customer a good start on the road to cooling. NZXT has fired off a new case once again, and has hit several consumers with a myriad of attractive features alongside powerful performance. 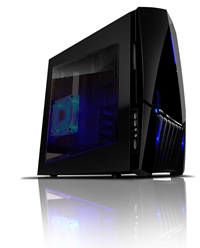 Sitting around a price point of about $100 CAD, it's fairly difficult to find another computer chassis that competes in all areas given; it's a case that I would recommend to anyone looking to build a new PC and not have to break the bank when out shopping for this critical component.

A special thanks to NZXT for making this review possible.