Thermaltake is one of the most popular companies in the computer hardware segment. With a wide variety of products, ranging from power supplies, coolers, accessories, and cases, the 9-year old company places an emphasis on cool, quiet computing.

We'll be looking at the newest addition to Thermaltake's Armor series of cases: the
Armor+ MX
(VH8000BWS). The previous generation of Armor cases have been of the full tower form factor type but the Armor+ MX is a mid-tower. 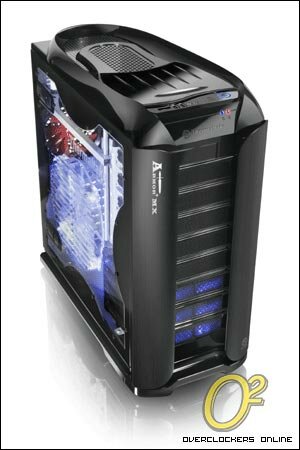 The Armor+ MX comes in a black box. It features an image of the case on the front, showing the flip-out front panel guards as well as a huge side panel fan with blue LED lighting. 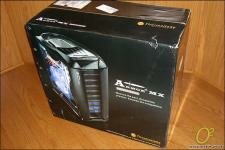 All the information can be found on the back, with a list of features present as well as several graphics highlighting important cooling features of the case. Here is a zoomed-in version so you can read the text. 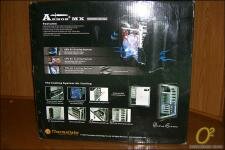 The sides of the box don't have much more information but they do have handy cutouts that serve as carrying handles. 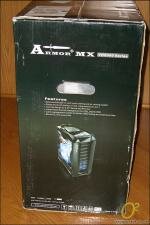 Opening the package, we see the case cradled within two Styrofoam blocks. It is also covered by a cloth-like material to prevent scratches. 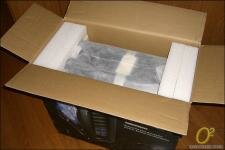 Pulling the case out, we can see that the case is indeed well-protected. There is a small plastic bag included which contains the manual and a cloth. 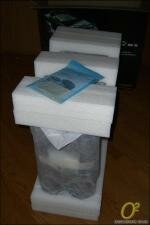 Removing the protective cloth-like material, we catch our first glimpse of the Thermaltake Armor MX+. The front panel guards and sliding tray at the top of the case come taped down to prevent movement.

Before taking a closer look at the case, let's take a moment to familiarize ourselves with the features and specifications so we know what to expect.

Thermaltake's website for the Armor+ MX VH8000BWS provides a great deal of information.

Here are the features: 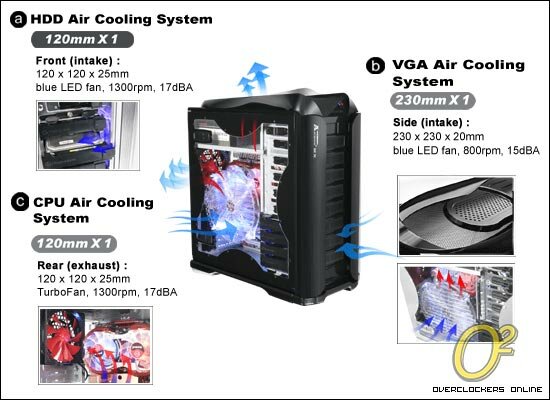 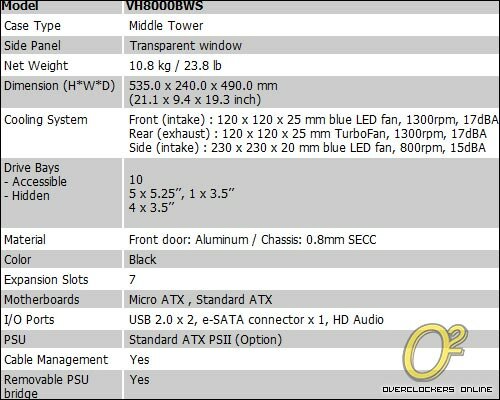 Looking at the front of the Thermaltake Armor+ MX, we can clearly see where it gets its name. With the brushed aluminum side guards in the closed position, the shape resembles a piece of medieval armor, such as a helmet. Opening the side guards all the way reveals access to the bays. They are not flimsy and have some heft to them that signals good build quality. Thermaltake's logo can be found engraved at the top middle as well as at the bottom right of one of the side guards. The other side guard features a prominent ‘Armor+ MX’ logo on the top. 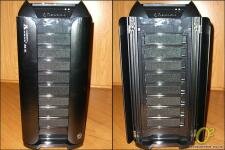 The top of the case has all the buttons and I/O ports. From left to right, we have an eSATA port, two USB ports, audio out and mic ports, the reset button and a slightly larger power button. Above these is a sliding tray that opens to reveal a small storage space. Above this is a region of vents which ends with a handle-like structure. However, there is a sticker on it which states that it is not to be used as a handle. 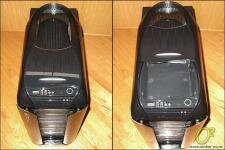 A side profile of the case shows its lines as well as the base which seems pretty sturdy.

The other side of the case has a large window, emphasized by a large, clear 230mm fan. The Thermaltake logo and their motto (‘COOLall YOUR LIFE’) is engraved into the acrylic itself. To remove the side panel, you need to unscrew two screws on the back and then push on the black ‘clips’ in order to slide the panel off.

Last, but not least, we have the back of the case. The obligatory I/O shield is included. There are 7 expansion slots and a 120mm fan, which looks small in comparison to the monster on the side panel. 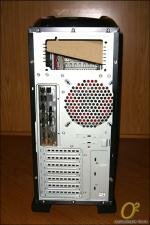 Removing two screws from the back and sliding the ‘clips’ toward the front of the case allows easy removal of the side panel. The Thermaltake-branded 230mm fan has sleeved wires, a nice touch.

Inside the case, there is a box containing some zip ties for wire management. 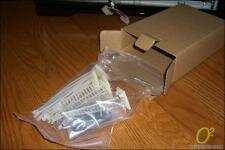 All the cables for the front panel connections, including the power and reset buttons, come neatly tied together with a rubber band. 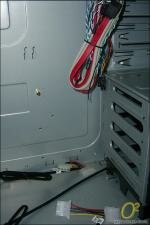 The rear of the interior has a red and black 120mm fan, which looks small in comparison to the huge 230mm fan. We can also see the seven tool-less expansion slots. 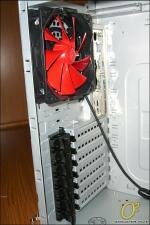 On the frontward side, we have all the drive bays. The optical drives are attached using clips but screw holes are also included. 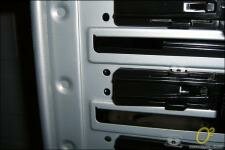 The hard drive cage is removable, which is necessary because the drives are installed perpendicular to the case's front-back axis. 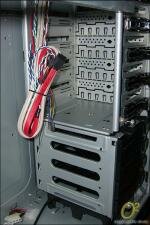 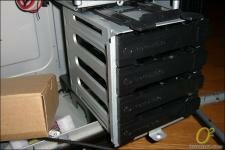 Removing the other side panel of the case requires the removal of two screws. There is ample space on this side to aid in cable management. 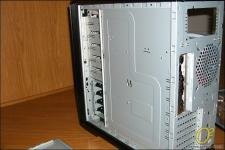 Removing the front bezel is easy and requires a small amount of force to be applied to the bottom of the bezel. This reveals yet another 120mm fan in the front. The plastic optical drive bay protectors double as fan filters. 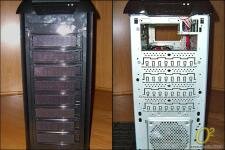 That covers the interior. We can now move on to the installation.

Though a manual is included with the Armor+ MX, you won't need it for installation since the process is very easy.

First, I prepared to install the motherboard by placing the included standoffs in the appropriate holes.

The motherboard was secured with a minimum of effort. However, there is a potential issue with large tower-style coolers because even with my Noctua NH-U12P, the top of the cooler comes dangerously close to the 230mm fan.

Installing the DVD drive was equally easy. First, I removed the bay cover. 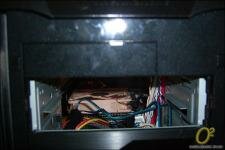 The drive was then slid into the slot until the clips on the sides made a satisfying click to denote a secure attachment.

I opted not to use screws as the clip seemed secure enough. 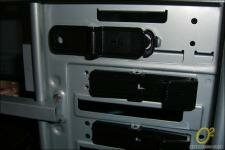 The hard drive was installed in the cage, also without any screws. 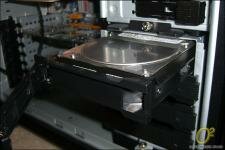 Subsequently, I installed the power supply using four screws. The support bar was removed first to make more room, and then reattached to help support the weight of the power supply.

Finally, I connected all the wires, front panel connections, fans, etc. to complete the installation. 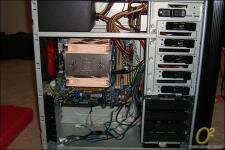 All in all, installation was a breeze and there were no major issues.

I will be testing the cooling ability of the Thermaltake Armor+ MX as compared to running the system without a case.

Temperature measurements were taken under different conditions using Lavalys Everest Home Edition 2.20. SMART was enabled for the hard disk in order to allow temperature readings. Idle measurements were taken with the computer idling at the desktop for 2 hours and no CPU or hard drive intensive programs, such as antivirus software, running. Load temperatures for the CPU were taken while runnig SP2004 Orthos for 2 hours three times and taking the average. HDD load temperatures were taken while running HD Tach's ‘Long Bench’ test 3 times and taking the average.

The ambient temperature was 25ºC throughout all the tests. 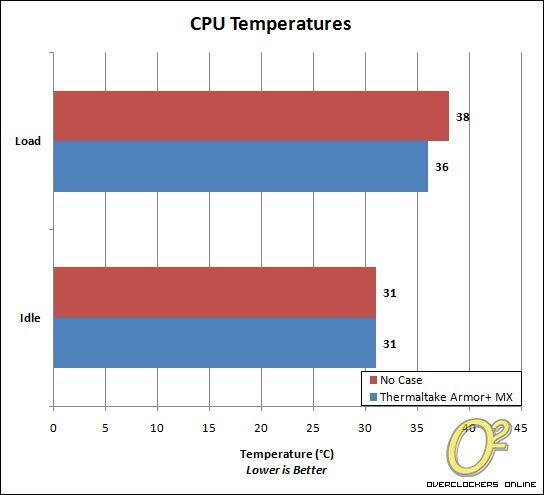 The CPU temperature measurements show both the idle temperatures to be 31ºC. When under load, however, the Thermaltake Armor+ MX is at a slight advantage. However, the difference is only 2ºC, which is somewhat insignificant. 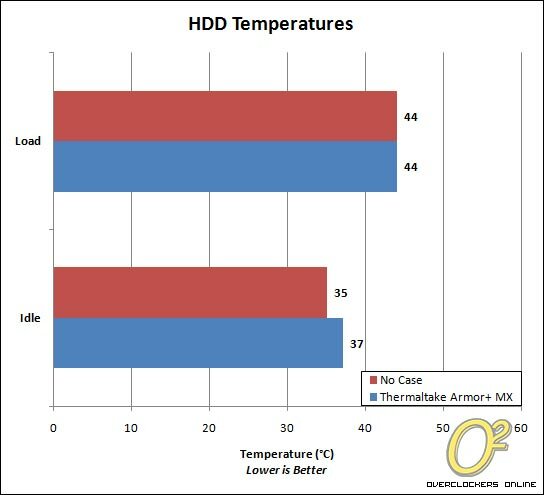 For the HDD temperature measurements, the idle temperatures differ by 2ºC with the Armor+ MX at a disadvantage at 37ºC. However, the load temperatures are both 44ºC

The Armor+ MX does a good job at insulating noise from the components and does not produce much noise of its own by virtue of its fans.

The Armor+ MX (VH8000BWS), with its mid-tower form factor, is definitely a welcome addition to Thermaltake's already popular Armor series of cases.

Excellently designed and engineered, the Armor+ MX is both stylish and functional. It also has several tried and tested features, such as the removable hard drive cage and the tool-less optical drive bays and expansion slots, and some unique ones, such as a huge 230mm fan and the sliding tray at the top of the case. 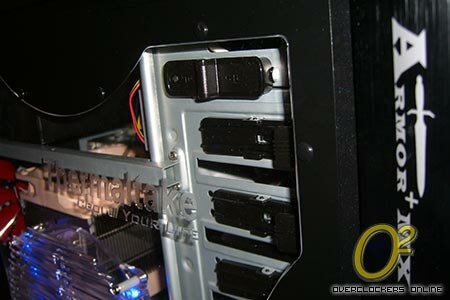 However, there are some minor issues I should point out. Something I would have liked to see in a case of this caliber is a removable motherboard tray. Also, attachable casters would really make a difference in a heavy case such as this one.

Overclockers Online would like to thank Thermaltake for making this review possible.