Another day and another monitor review! Typically, a monitor is characterized by its function, as display for digital content, but beyond the basic display capabilities of a monitor, innovation is what defines a monitor as more than a mere display, but a piece with a purpose and place in one's home.

Samsung has been in the consumer electronic market for quite some time now, they have not only the experience, but an enormous, ever- growing line of products as well to show for it. Samsung has made numerous appearances here at Overclockers Online with an impressive showing of printers, digital audio devices, and of course monitors! 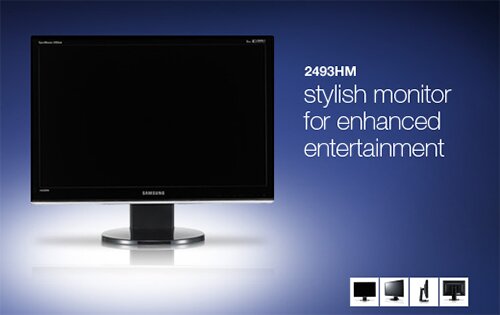 Right off the bat, Samsung does not shy away with specifications:

The 2493HM has everything that you need. With a Height Adjustable Stand (HAS), built-in-speakers, HDMI technology, full 1080p HD, 10,000:1 Contrast Ratio and fast response time, you will be able to power through a work day and watch a movie or play games with all of the extra free time that you will have. Not to mention, the eye catching bezel design will fit perfectly in public view or in the comfort of your home office. The 2493HM is Microsoft Vista Certified and works hard while looking good. With the 2493HM its not hard to imagine.
But, Samsung does have good reason to boast, taking a look at the numbers, this is not your typical monitor. 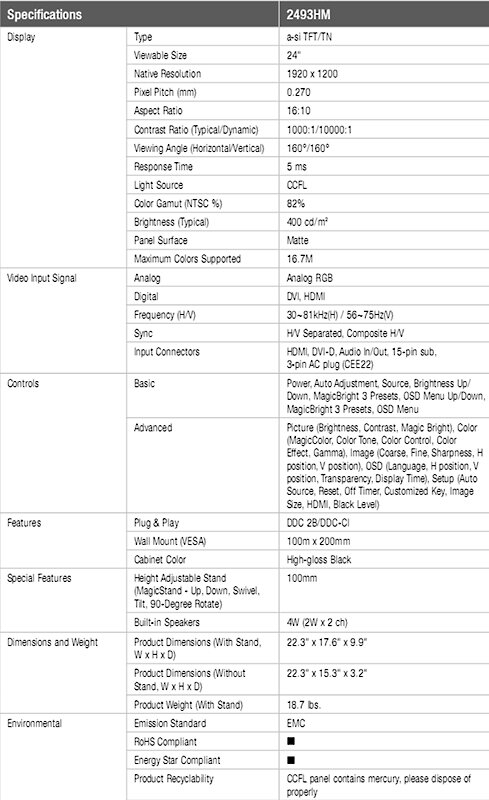 The SyncMaster 2493HM is no doubt, a solid offering by Samsung.

Like most Samsung monitors, the 2493HM arrived in a typical Samsung box, plain, brown, and well packed.

Although minimal, the package offers in-depth detail and specifications along with compatibility information. 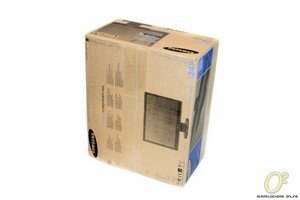 Opening the unit up, Samsung has included a typical bundle of accessories: documentation, software, cables, and of course, the SyncMaster 2493HW monitor itself! 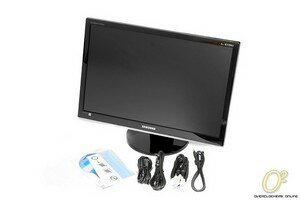 What instantly hits you when you remove the monitor is the sheer size of the unit, especially when taking into consideration the hefty stand. 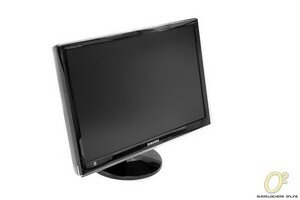 One thing I have really become fond of is Samsung's styling, which, in this reviewer's opinion, often goes unnoticed. The SyncMaster 2393HM like the majority of Samsung products is subtle in design, but to it's credit, beautifully composed. The monitor has a fairly classic silhouette, yet the glossy black finish, chrome accent, bold white lettering and dim blue LED makes it a stunning piece on its own, and a unit which blends into any environment.

Samsung's 2393HM is geared towards seamlessly integration into any computer users' workspace and accordingly, it comes with a few perks. For one, as mentioned earlier, stowed away behind the panel are two USB connectors, great for wireless dongles or a semi- permanently attached USB device. 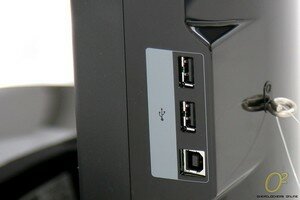 Another thing I am incredibly happy to see is a truly versatile and usable monitor stand!

The arm not only allows for height adjustment, but tilt along with a full 180 degree rotation – a god-send for reading lengthy text media.

Hidden away to the rear are the connector heads, and with all its features, this monitor is going to have quite a few connectors! For visual output capabilities, the SyncMaster 2493HM offers VGA, DVI and HDMI support. For audio we have a basic audio input, and an output which unfortunately is placed inaccessibly behind the panel. Towards the other side of the screen is a power plug, along with a power switch which is a great addition. Placed off to the side of the monitor stand is a USB connector allowing the use of the two additional USB devices.

Unlike the Samsung 2232GW I last looked at, this monitor comes completely assembled, which is partially the reason for the enormous package!

Installation consists of no more than setting the monitor on the table, and plugging in the appropriate cables! 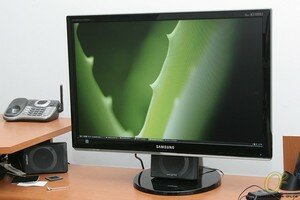 From there, the monitor can be raised, lower, and tilted to suit the needs of the user.

Before we actually begin playing with the monitor, in order to fully take advantage of what the SyncMaster 2493HM we will begin with installing the drivers. 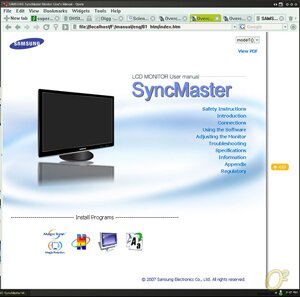 Upon installation of the drivers, Windows will recognize the display unleashing its full potential. While we will not be going through each and every piece of included software, we will be taking an in-depth look at Samsung's MagicTune software!

This tab controls the absolute basics, brightness, and contrast along with a little feature Samsung likes to call MagicBright. MagicBright can conveniently be accessed through the On Screen Display controls allowing optimization for any environment. MagicBright includes optimized settings for text, internet browsing, games, sports, movies, a configurable custom setting, and lastly dynamic contrast, automatically adjusting the display according to one's usage.

The Color's tab allows users to further tweak color tone, RGB balance, gamma, color effects, color saturation through MagicColor, and calibration which we will discuss in the next section.

This section allows the adjustment of the displays vertical and horizontal position along with sharpness. 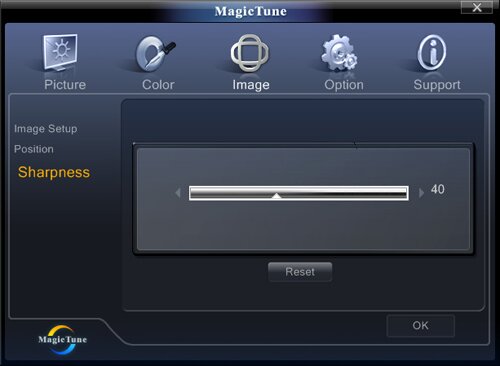 This final section is for tweaking MagicTune and the OSD itself allowing users to customize keys. 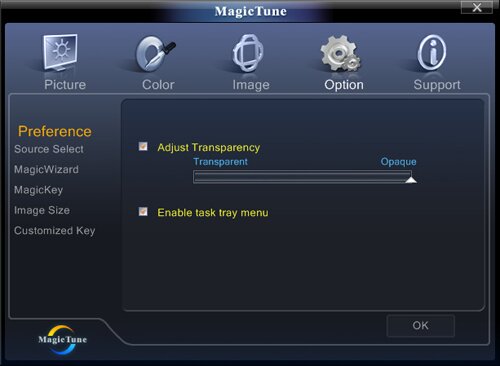 Perhaps the most interesting feature included in MagicTune is the ability to calibrate the monitor. Of course, MagicTune is by no means a replacement for hardware calibration, but the ability to easily and fairly accurately calibrate a monitor through software is just about as good as it gets without emptying ones pocket for a hardware calibration tool. 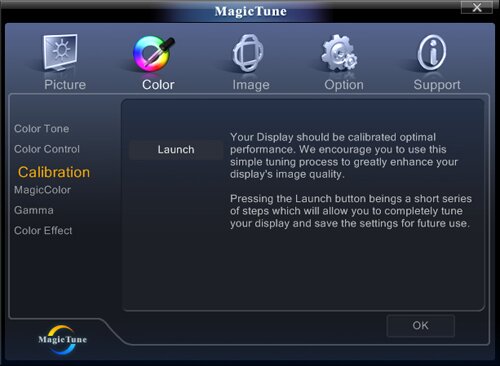 The program itself is not as intimidating as it looks, although it does help for an explanation, and that's what we are going to cover right now! 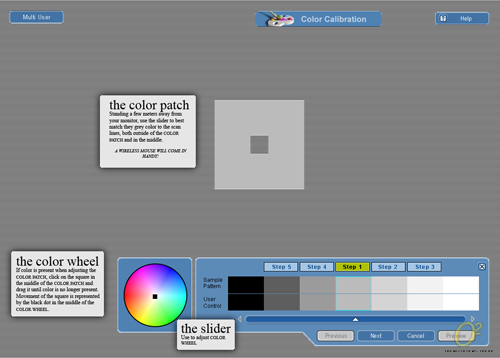 Our main concern is the slider and patch in the middle of the square, our goal is to make the color patch and the grey patch disappear into the background. It helps to squint your eyes, but its simply easier to move backwards from your monitor a few meters, of course the aide of a wireless mouse is a god- send! 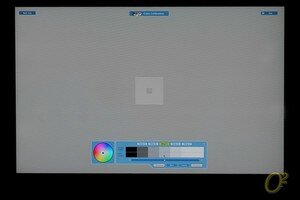 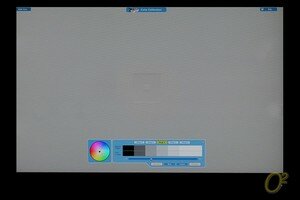 Calibration is a five step process, it does take a while, and it takes quite a bit of fiddling, so sit down and grab yourself a drink! 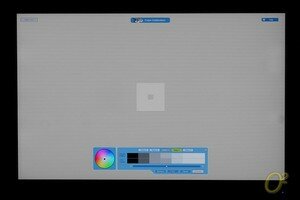 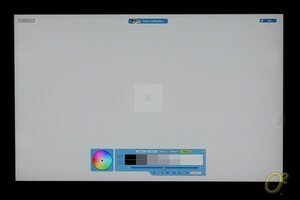 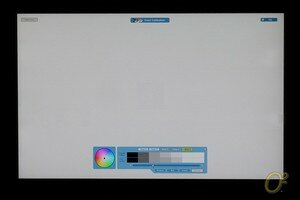 Here is where things get tricky. A slight hue can be detected in the color patch indicating that the screen is displaying the wrong hue. To correct this, simply grab the patch in the middle, and move it in accordance to the color wheel on the bottom. In this case, the color patch had a tint of blue, so move it slightly towards the direction of yellow. 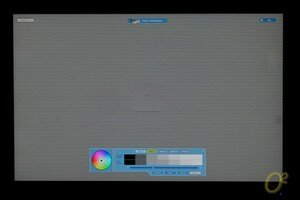 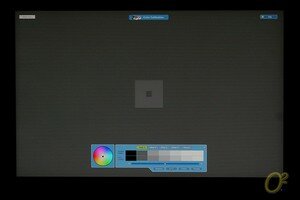 The same goes for the final step, first use the slider on the bottom to best match the color patch to the background and then adjust for color.

Once all five steps are completed, hit the preview button!

Now with the initial setup out of the way, we can take a look at how the monitor performs!

Immediately, the dynamic contrast ratio of 10 000: 1 is apparent. The display produces spectacular colors with stunning hues, contrast and saturation. The display in essence breathes new life into digital images allowing them to for once, show their true color.

Running guns blazing through a first person shooter the Samsung SyncMaster 2493HM had absolutely no trouble keeping up. If anything, it is the video card that needs to keep up with this beast's massive 1920x 1200 resolution! 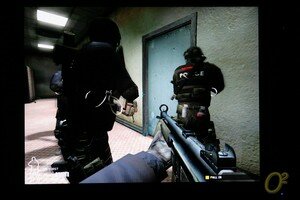 Of course, as an avid digital photographer, my main usage of the monitor was beyond simple fun and games, it was about photo editing. 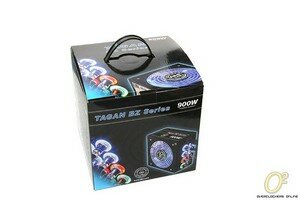 The SyncMaster 2493HM's ability to display such a wide range of colors gives it an enormous edge for photo editing, allowing users to firstly more accurately see colors and secondly, edit images.

For the writers, the coders, and all those who deal with pages sprawling text, simply grab the monitor and spin it 90 degrees. MagicRotation will then automatically vertically reorient the display.

In terms of functionality, as we discussed earlier, the SyncMaster 2493HM has a set of built in speakers. While in form this is an excellent idea, the controls for the speakers are integrated within the panel OSD buttons. Now here is my gripe with this monitor, buttons are buttons for a reason. Those of use who grew up with the keyboards of the 90's cringe at the sight of soft touch keyboards, we despise touch sensitive devices, and especially loathe touch screen displays for one simple reason, tactile response. The reassuring audible clack lets us know the device has registered our wishes and that provides a level of comfort unreached by touch sensitive buttons. On screen display controls are notorious in the sense that they are synonymous with fidgeting. Thankfully, for tweaking OSD settings, we have MagicTune, however, MagicTune does not control speaker volumes, nor is software control of volume practical. I cannot begin to tell you the numerous times I have tried to adjust volume only to press source temporarily disabling the monitor or not being able to turn down the volume quick enough to save my ear drums. Volume control is something that should never again be placed within the prodding reaches of push buttons. Volume control should, and forever must be sanctioned on the principles of practicality; simply an adjustable dial.

Despite my searing criticism of Samsung's decision to use touch sensitive buttons for the On Screen Display controls; I wholly and entirely did enjoy my time with this display. As a zealous advocate of dual monitors, I will admit defeat, my time with Samsung's SyncMaster 2493HM has crumbled my resentment of single monitor solutions- that is unless Samsung decides to send me two displays to play with next time! 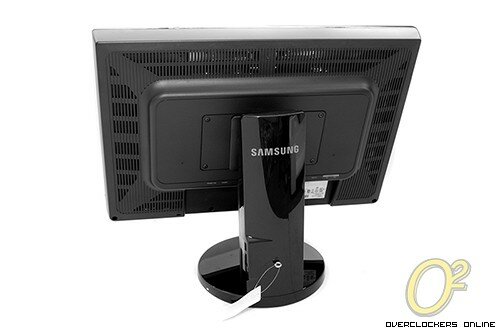 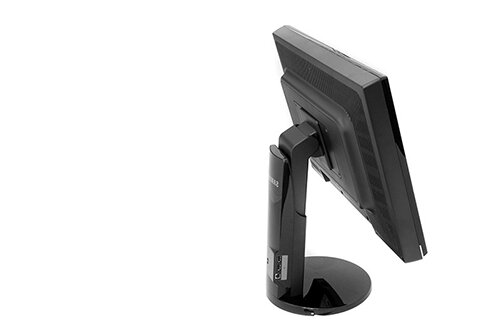 Wrapping up a monitor review has always been a bitter sweet affair, and this one will be no different and I can't say that I will not be squinting into the distance as the UPS truck drives off to return the display from its long overdue visitation on my desk.

Overclockers Online would like to thank Samsung for making this review possible.