Noctua is back at Overclockers Online with another ‘sound-optimised premium component’. Last time, we looked at a fan from this Austrian company. Today, we have a CPU cooler. Heatpipe-outfitted coolers have become the norm and this one from Noctua is no different.

Featuring four dual heatpipes, tne Noctua
NH-U12P
tower isn't unlike other coolers on the market. What makes it unique is the fact that it comes with the amazing NF-P12 fan that I reviewed last time. 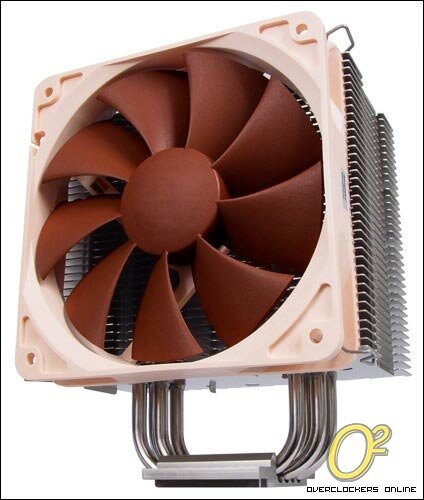 The NH-U12P comes in a cubish box that is unmistakenly Noctua thanks to the characteristic color scheme. A small window on the front allows a glimpse of the NF-P12 fan that comes with the cooler as well as some of the heatsink's fins. A small list of features is present as well as a note that Noctua's own NT-H1 thermal compound is included.

An extensive list of heatsink and fan specifications can be found on the top of the box. Note that the heatsink can accommodate up to two 120mm fans.

On one side of the package, we have some information on the compatibility of the NH-U12P. LGA775 and AM2 are supported. 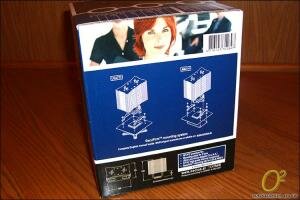 Several features are highlighted on the back. 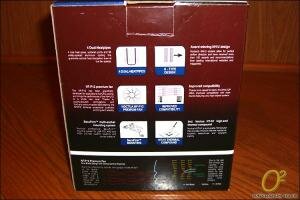 Another side shows off the numerous awards Noctua has received as well as a product description in six different non-English languages.

Before opening up the package, let us take a look at the features and specifications.

Noctua's webpage has all sorts of information relating to the NH-U12P.

Here is their description:

The NH-U12P continues the legacy of Noctua's classic NH-U coolers, which won over 150 awards and recommendations from leading international websites and magazines. While retaining the successful design and the well-proven SecuFirm mounting system, the newest revision has been reworked for enhanced main board compatibility and now comes with Noctua's NT-H1 pro-grade thermal compound. Fitted with the new NF-P12 premium fan, the NH-U12P brings its predecessors' much-acclaimed quiet cooling performance to a whole new level!
The list of features we found on the package is also here:

As I mentioned earlier, of particular interest is the fact that the NF-P12 fan is included with this package.

Moving on to the specifications:

To clarify the NF-P12 fan's specifications, I am going to quote myself from its review:

Now we can get to the good stuff.

Opening the box up reveals two smaller boxes inside. One of them has two indentations to allow you to lift it out with your fingers – a nice touch. 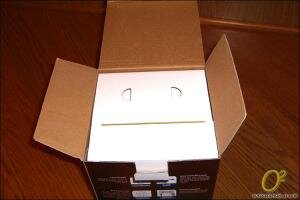 The heatsink and fan can be found cradled in one of the boxes.

Mounting hardware and accessories can be found in the other. These include an installation manual with instructions for LGA775 and AM2, three bags with mounting hardware, and a metal screwdriver-like contraption.

The NF-P12 fan included with the NH-U12P is identical to the one I reviewed. It does not come attached to the heatsink by default.

Turning our attention the heatsink itself, we can see the linear arrangement of the 36 aluminum fins. Four dual heatpipes emanating from the nickel-plated copper base intersect these fins. 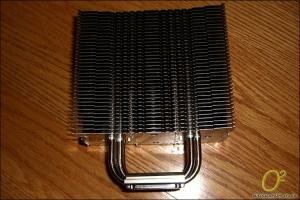 Noctua has designed the heatsink to be tower-shaped. Though not as tall as some coolers I have seen, you will still have problems trying to mount this product in small cases. However, there is quite a bit of room between the base and the first fin so there shouldn't be any clearance issues.

The surface of the top fin is stamped with Noctua's logo.

Unlike coolers with a mirror finish, the NH-U12's nickel-plated copper base sports a somewhat grainy finish. You can find Noctua's explanation on this FAQ page which basically states that the ‘micro-grooves’ actually allow high-viscosity thermal compounds to be spread more easily, resulting in better performance. 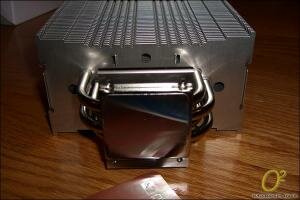 A final look at the heatsink's base shows the good workmanship and build quality, especially at the points where the heatpipes connect to the base. There are also two holes – perhaps this foreshadows a six heatpipe version for the future? 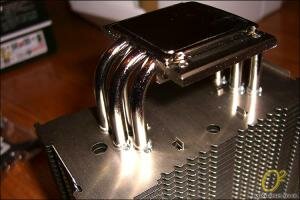 I'll be installing the Noctua NH-U12P on my MSI P965 Neo-F motherboard, which has an LGA775 socket. 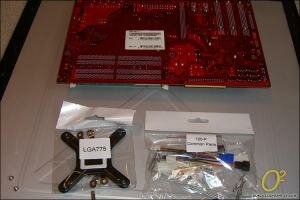 As with most heatsinks, you are going to have to remove your motherboard from the case. Flip it over, remove the stock backplate, and line Noctua's up with the holes in the back.

Turn the motherboard right-side up again and place four insulating washers over the holes.

Attach the two mounting braces to the heatsink base using the included screws. 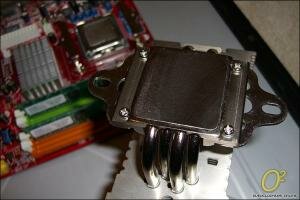 Now screw in the two mounting standoffs in the appropriate orientation depending on how you want the heatsink to fit. Also, apply a small amount of the NT-H1 thermal compound to the top of your CPU. 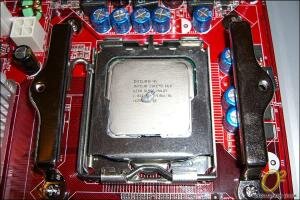 Place the heatsink on top of the CPU and rotate a few times to spread the thermal paste.

Secure it to the mounting standoffs with two spring-loaded screws. 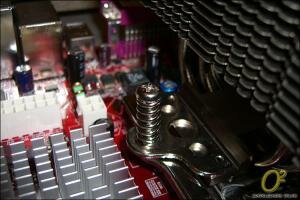 Note the orientation I chose for the tower, based on the fact that if I had oriented it in a different way, it might hang over the edge of the motherboard and cause clearance issues when installing it in a case. There is plenty of room between motherboard components, memory, and the heatsink.

Now it is time to install the fan. I'm going to use the included NF-P12 fan although you can use any 120mm fan you want. 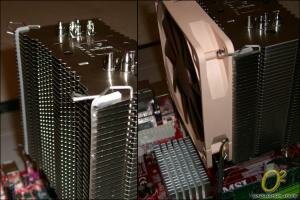 Place two antivibration strips along the edges of the heatsink. Then use the fan clips to secure the fan to the heatsink, taking note of the fan's airflow direction.

With the fan installed, the cooler seems to tower over the small motherboard. There were no clearance issues.

If you've got an extra 120mm fan, you can install it on the other side in a push-pull configuration. The procedure is the same. 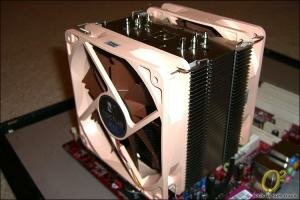 The NH-U12P looks very good with two NF-P12 fans installed if I may say so myself though some users won't find the brown-and-beige color appealing.

Though I won't be testing the NH-U12P with two fans due to the fact that it only comes with one, here is a teaser of sorts:

I will be measuring the CPU temperature at both stock and overclocked speeds. Temperature measurements were taken using Lavalys Everest Home Edition 2.20. Idle measurements were taken with the computer idling at the desktop for 2 hours and no CPU or hard drive intensive programs, such as antivirus software, running. Load temperatures for the CPU were taken while running SP2004 Orthos for 2 hours three times and taking the average.

I went with the NF-P12 at medium speed because based on my findings, 1100 RPM represents a good performance vs. noise ratio. At that speed, it has an airflow of about 46 CFM and a noise level of 16.9 dBA.

The ambient temperature was about 25ºC throughout all the tests.

First up we have the CPU temperatures at 1.86 GHz. 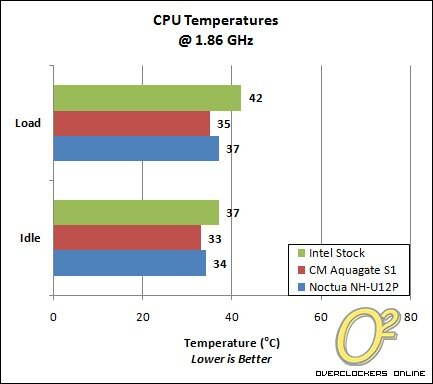 Clearly the NH-U12P outperforms the Intel stock cooler. However, it is neck and neck with the Aquagate S1. The Aquagate is a water cooling kit so its dominance is to be expected. Even so, the NH-U12P performs quite well.

The temperatures at 2.33 GHz also paint a similar story. The NH-U12P only trails the Aquagate by a few degrees.

Of course all of this was with one NF-P12 running at 1100 RPM (medium speed). Adding another one or increasing the fan speed will definitely improve the results a little bit as seen in the performance page of the NF-P12 review.

Throughout all the tests, the NH-U12P was the quietest of the bunch thanks to the NF-P12 fan. It was even quieter than the Aquagate S1's water pump not to mention its radiator. It was obviously quieter than the Intel stock fan.

All things considered, Noctua's NH-U12P performed admirably well. The cooler's design and build quality are excellent. In terms of compatibility issues, there were none – the cooler has ample clearance from memory and other components. Also, it can be rotated and thus can be installed in two different orientations. The only clearance issue that might arise is due to its height as it may interfere with some cramped cases. Installation was very easy except for the fact that it requires motherboard removal. Performance is top notch and it is easy on the ears thanks to the quiet NF-P12. 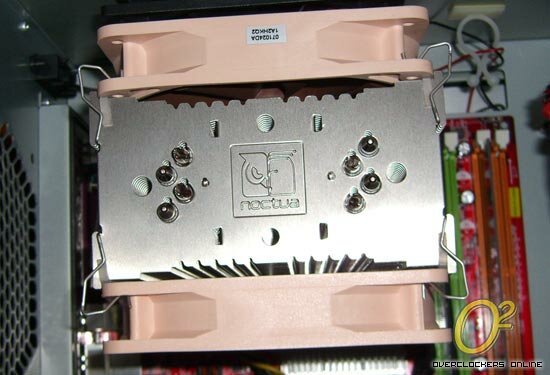 I've been impressed with Noctua's products so far. The NF-P12 was great and is a perfect fan to match with the NH-U12P heatsink. Of course, if you have two NF-P12s – and I do – that just makes life even better!

Overclockers Online would like to thank Noctua for making this review possible.