Evercool has a mission, and it goes as follows:

Working as a company with 1200 employees, and producing 2.5 million pieces per month, Evercool continues to compete with other major companies. As it fights for the hearts and minds of enthusiasts, it continues to be more and more impressive and innovative with its products. Today we will be looking at the 80mm Rifling Fan.

The 80mm fans are becoming less popular as 120mm fans outperform them in terms of noise and cooling performance. Evercool has considered this and has actually housed a 92mm fan in an 80mm bracket. How will this perform? Will it be able to compete with a 120mm fan? Read on and find out!

The Rifling Fan comes in a neat, vacuumed-sealed, plastic mold. The cardboard insert states it is ‘Powerful & Silent’, with ‘The unique design makes the air pressures stronger to creates high dissipation’ on the right side. Brief features are introduced to us as well: 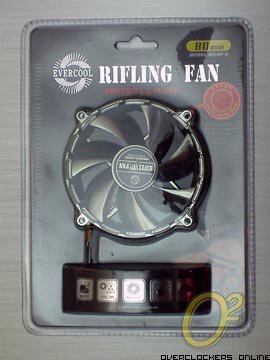 On the backside of the insert, we are given an airflow graph, features, and specifications. 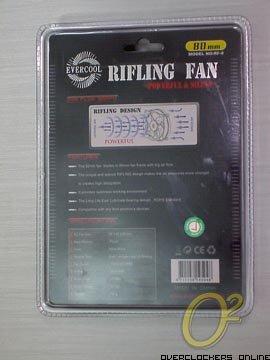 According to the Evercool website, these are the exact specifications:

Features are as listed:

Let us move our attention to the fan now.

Before we begin, let's discuss the term rifling. Rifling, when used in conjunction with guns, means that inside the barrel of the gun, there are grooves that slowly twist their way to the other end of the barrel. This gives the bullet a spin when fired, making it more accurate as it cuts through the air. The Rifling Fan makes reference to rifling by directing the airflow through the turbine of fan blades. Ironically enough, the fan blades are the color gunmetal gray.

Let us start. Cutting the top of the packaging and sliding the blade down the edges, I removed the fan and its contents from their plastic cocoon.

Moving in to get a closer look at its front, we see the name of the fan, Evercool's stated ‘Powerful & Silent’ phrase, along with its logo, and an automatic rifle in the background, another reference to rifling.

Flipping the fan over, we see a sticker that covers the bearings, stating the specifications of its bearings and power requirements. 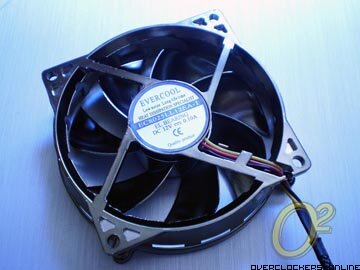 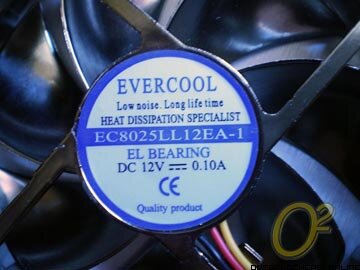 Turning it onto side, we see how the fan expands from 80mm to 92mm. As well, every several millimeters there are rectangular notches. It is possible that these notches improve airflow not only pushing air through the fan, but also out through the sides.

An appreciated inclusion is the braided power cord for the fan. This can keep the wires from snagging and being cut from potentially sharp edges within the computer chassis. 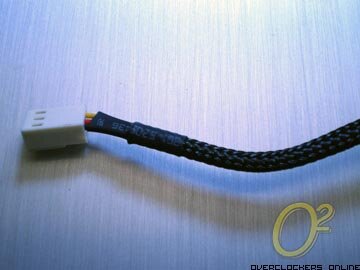 As well, Evercool has included an adapter to convert the PWM connector to a 4-pin Molex, allowing access to a 12v rail instead of pulling power from the motherboard.

The last piece included in the packaging are four screws in a tiny plastic bag to install the fan to its designated place.

Let us fire it up and see how it performs!

The following system configuration will be used to test the Rifling Fan's cooling capabilities:

For the test, I will mount the Evercool Transformer 4, using StarTech Heat grease 10. I will allow the CPU to idle for 2 hours, and once the two hours are done, I will record the temperatures of the CPU core. I will then stress the CPU with two instances of Orthos for two hours. Temperatures will be recorded again. Each fan will run at their lowest, medium, and highest speed. There was not a big enough difference between the Rifling Fan's lowest and highest settings to test the performance of its medium speed. 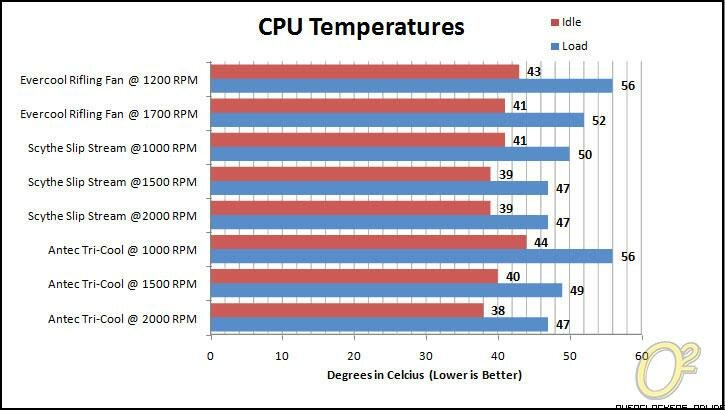 The performance of the Rifling Fan is exceptional. As the fan has a 92mm diameter, I did not expect it to be able to perform better than a 120mm fan. I was still impressed with how it was able to keep up to its competitors, boldly following by a few small degrees – though this was only possible at 1700RPM. I have no decibel reader, but I can assure you that at 1700RPM, this fan was not running at 17dB as that's the loudness of a whisper. At the lowest speed of 1200RPM, we were closer to the perceived whisper level.

If Evercool made this a 120mm fan, it could be a great option to replace my case fans. It has an innovative design, and if Evercool designed the 120mm the same way, they could even possibly fit a 140mm fan on a 120mm bracket. As well, if you plan to install this fan in your system, you either get no noise at the cost of low cooling performance, or more cooling performance while sacrificing silence.

However, in the end, Evercool still produced an exceptional 80mm fan but there is room for improvement. I greatly look forward to Evercool can do with the innovation it possesses, proved repeatedly throughout its numerous products. The Rifling Fan is a great product for those who are looking for better cooling compared to an 80mm fan and are unable to install a 120mm, and are looking for a stylish design to top that.

A special thanks to Evercool for making this review possible.