Evercool continues to pump out top-notch, innovative products, and as reviewers keep reviewing them, consumers keep purchasing them. The end result is a satisfied customer with a well designed product that exceeds the standards of excellence, performance, and quality. Here is how Evercool says it:

Evercool just recently released their newest thermal compound, the Cruise Missile. Evercool has produced a small number of thermal compounds in the past, and while they perform decently, it is hard to say what Evercool has learned from their past experiences. Let us read on to find out!

Contained within a relatively small cardboard box, we see the plastic syringe nestled in an insert behind a transparent plastic window. With ‘Cruise Missile/High Performance Thermal Compound’ gracing the left side of the boxes face, the model name and a brief description are displayed on the right. The description goes as so: ‘Excellent Performance Cruise Missile (STC-03) with extremely low thermal resistance for superior thermal performance. With a high Thermal Compound of 2.89 W/mH.’ 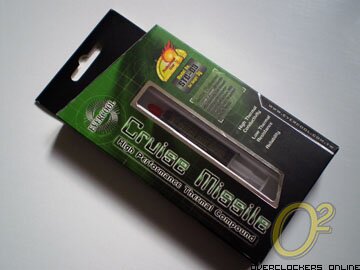 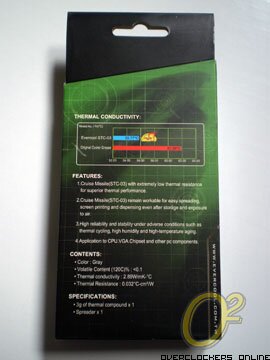 Flipping the top flap open, I pull the containing cardboard out. Nestled within the two sides, we see the syringe containing 3g of thermal compound sitting there, awaiting heavy usage from the ‘Professional User’, as Evercool puts it. On the left side, we see an included spreader. I greatly appreciate this, as now I won't have to use a folded up hunk of paper for this application.

Slipping the two pieces out and laying them out side by side, we can get a closer look.

The paper wrap that encircles the body of the syringe simply states the company name and the model number on a green backdrop.

Let's go check out the features and specifications now.

According to the Tuniq website, these are the exact specifications:

These features are found on the rear of the packaging, as well as here.

The two key things that I deem special in thermal compounds is their ability to be electrically non-conductive and non-curing. Sadly, the Cruise Missile does not have either of these two inclusions. Other than that, there is nothing special to mention here, so let's apply this compound and see how she performs!

To install the Cruise Missile is like any other thermal compound application. The only difference is that the user gets to use the included spreader. Spreading the compound was a simple task – It wasn't overly thick, or too thin. It went where I wanted it to go and held its consistency at the same time. 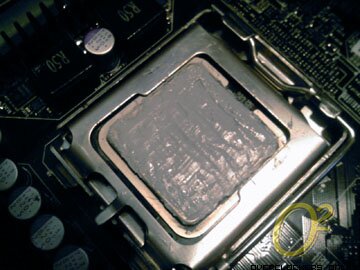 The following system configuration will be used to test the TX-3's cooling capabilities:

For the test, I will allow each thermal paste to cure for 24 hours. Then I will let the CPU idle for 2 hours, and once the two hours are done, I will record the temperatures of the CPU core. I will then stress the CPU with four instances of SP2004 for two hours. Temperatures will be recorded again. The Cruise Missile will be tested against the following competitors: 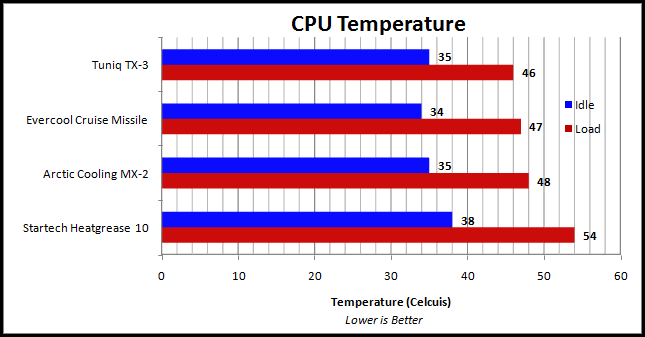 Testing the Cruise Missile has proved some interesting results. While idling one degree cooler than the other two leading champions, it feel behind by one mere degree against the TX-3 under full load. The difference between a quality high performance thermal paste and a mainstream budget production is qutie evident as seen in the weak performance of the Heatgrease 10, it falls behind by 7 degrees when under full load.

Evercool has learned something here. To perform up in the charts with Arctic Cooling and Tuniq is truly impressive feat. While it didn't necessarily out perform its top competitors, it did with no doubt run stride for stride.

What Evercool lacks in special features, such as being electrically non-conductive and non-curing, they make up for it in performance. I could not find any retailers to find an approximate price to determine its value, but I am assuming it will be around the same price as all other compounds that offer similar performance, which is about $10 to $15 CAD. Let's weigh it out:

A special thanks to Evercool for making this review possible.