Since establishment in 2004, NZXT has raised the already high bar for computer products; from computer cases, to power supplies, and other smaller accessories. Being on the top can get windy at times, but NZXT has been solid and continually impresses people with nearly every product produced.

Can the new NZXT Gamma live up to expectations though? Being a budget case, the common speculation is lack of features, aesthetics, and performance. It is possible the Gamma can break the mold, but before we come to any hasty conclusions, let's check it out.

The Gamma came in a simple, corrugated box, measuring a mere 22′(h) x 20′(l) x 10′(w). With ‘GAMMA’ sitting prominent in the corner, the only other details enlisted state ‘Classic Series’ and ‘Black Steel Mid tower enthusiast chassis’. Filling the empty center is a giant ‘G’, which I'm assuming stands for ‘Gamma’, ‘Good’, or ‘Gaming’. Whichever it is, I hope it lives up to it.

Rotating the box 90 degrees, we view the main specifications printed out in English and three other languages. More on that shortly! 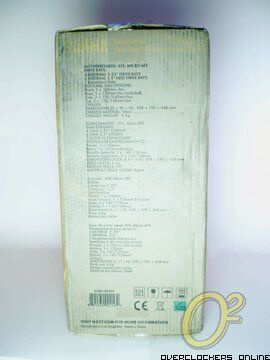 Viewing the back of the box, we see the Gamma's main features. Unfortunately, no pictures were included here, but we will get to see them all in a more personal view shortly. 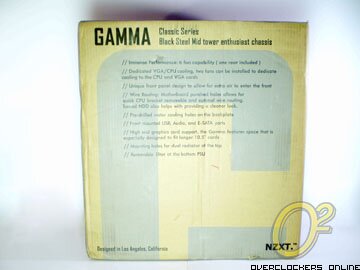 Opening up the box, I gently tug on the Styrofoam inside, and the Gamma slides out. The Gamma is wrapped in a large plastic bag, with stiff Styrofoam caps on the top and bottom. This kind of protection is adequate for case delivery. 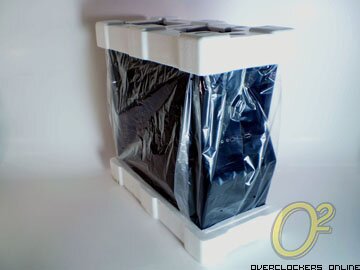 Before I unveil the Gamma completely, let's take a peek at what it has to offer first.

Found on the NZXT website, this is a direct copy of the specifications posted: 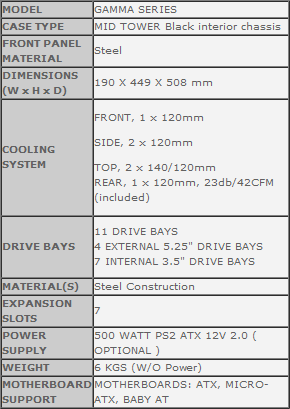 As previously mentioned, these features are printed out on the box, as well as on the Gamma's product page here.

This list of features is pretty common among the new NZXT cases. Being a budget case, I'm somewhat surprised to see that it has pre-drilled holes for water cooling. The six fan capability is a nice add-on, but what I'm not surprised about is the single fan included, seeing as NZXT is trying to hit the low price point.

First off, we are presented with the left and right side panels. The left side is fairly unassuming, revealing no fancy lights, acrylic windows, or shiny logos; the only thing present here is two locations for two fans, with the options of installing 80, 92, or 120mm fans. The right side is even more unassuming, displaying a clean panel with nothing but an indent for easy grip when removal is necessary.

Moving to the top, we again see two locations for installing two fans, but of a different flavor; we are given the options of installing either the 120mm or larger 140mm fans. Unfortunately, no fans were supplied here, so if you want higher fan power, you need to hand over some cash for more fans. 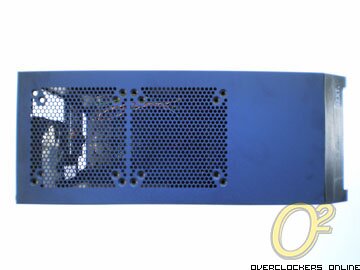 Moving to the face of the case, we are presented with four 5.25′ bays. Along the middle, we see both ‘in’ and ‘out’ 3.5mm jacks, two USB ports, and an e-SATA port. Moving some more to the right, we see the power button, and immediately below that, the reset button. Both buttons are made of a solid plastic, but do move substantially to the sides when pushed. Fortunately, they don't move enough to the sides to get jammed in. Hidden behind the front bezel is the location to install a 120mm for increased hard drive cooling. Removing the front bezel is a simple task of giving it a slight tug, and is also necessary to install your 5.25′ drives. 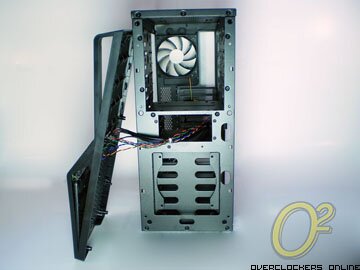 Rotating the chassis a full 180 degrees, we see the only fan included with the Gamma. We have nice mesh covers over the expansion slots, a VGA air duct, and the aforementioned pre-drilled holes for water cooling.

Finally, we take a look at the bottom. What we see here are rubber caps for each of the four ‘feet’, which elevate the chassis a nice 3/4′ of an inch. This gives the power supply, which is mounted on the bottom, enough space to receive adequate air intake through the included removable dust filter.

The overall appearance of the Gamma is clean and simple but does feel somewhat flimsy on the outside. Let's see how it feels and looks inside.

Tucked away inside the hard drive bay, a small cardboard box has a few goodies in it for us yet. Inside we found enough hard drive rails for five hard drives, a variety of screws for all necessary mounting, and a thorough installation manual in English, French, German, and Spanish.

With the side panels removed, I want to start off by viewing both sides the chassis from a small distance. This will give you a good idea at what things look like as a whole.

Looking at the front half of the chassis, we see room for five hard drives in the lower turned hard drive compartment. Directly above that, there are two bays for two more hard drives, which are placed in the standard orientation. Moving up a touch again, we see four bays for your 5.25′ devices. 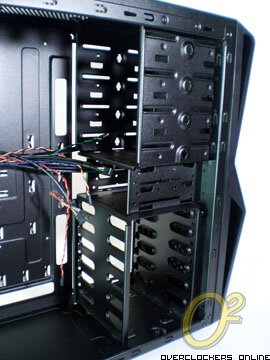 Shifting our focus to the top, we see the aforementioned two locations to install two additional fans, if one was inclined to increase the cooling performance. Also notice, directly below that, the square hole cut into the backplate. This makes mounting the larger CPU heatsinks a much easier task, because you don't need to remove the entire motherboard just to get to the back of it. 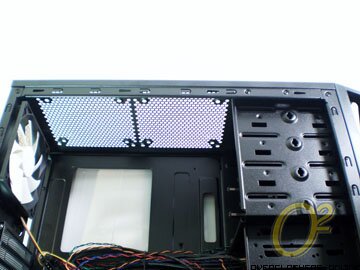 Going down the back, we once again see the included 120mm fan. As you might notice, the fan uses a 4 pin Molex connector, not a PWM; in other words, this fan runs at one speed and one speed only. The only other thing to point out here is the mesh expansion slots covers, which are held in place by the standard screws, and not something like thumbscrews.

Finally, we come to the front panel connections and headers. Here we have a SATA cable for the e-SATA, USB header, HD and AC'97 audio headers, HDD and Power LED headers, and the Reset and Power switch headers. 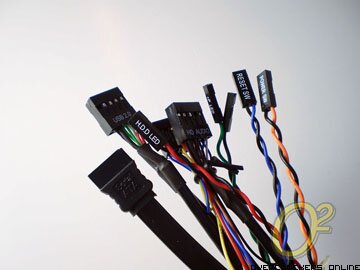 It's always a good idea to go for a quick run through the interior. Everything seems attractive and up to snuff here, so let's install the components and see if it runs just as well!

To start off, one of the two discrepancies I had when installing the whole system was this: the Gamma only has support for 3.5′ hard drives. It comes with no 3.5′ to 2.5′ adapters, unlike many new cases recently manufactured. The bigger issue comes into play as our test system uses a 2.5′ drive. For the sake of the review, I will demonstrate the installation with a 3.5′ I have sitting nearby.

First off, to install the rails on the sides of the hard drive, all you need to do is simply line up the studs with the mounting holes on the drive. 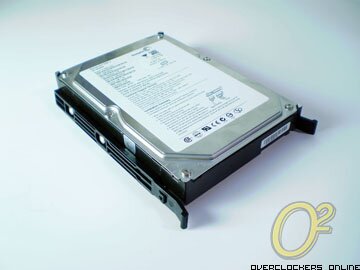 Next, you slide the drive into one of the five bays until you hear a soft click. Alternatively, you could slide it (without the rails) into one of the two bays above, and put it in its place with a couple of the supplied thumbscrews. 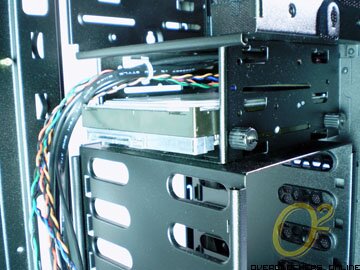 The second of the two discrepancies I had was that if you install any optical drive in the top bay, it will get in the way of any fan you want to install there. An easy way to get around this is to drop the optical drive down a bay or two, but this is still an annoyance and cooling hindrance.

To install the 5.25′ drives, you need to remove the front bezel. This is pretty easy; no clips to push in or special levers to pull. Next, slide the drive into the bay, screw it in place with the thumbscrews, and replace the front bezel. Very simple and very clean.

Other than that, the rest of the installation rolled on smoothly. Stand offs were easy to install, and everything lined up perfectly. Seeing as the power supply is mounted on the bottom, many system builders may be concerned about awkward cable lengths; the one used here is a simple, budget 300w unit, and there were no problems. As you can even see, there was still enough cable to make a few corners to keep things neat. 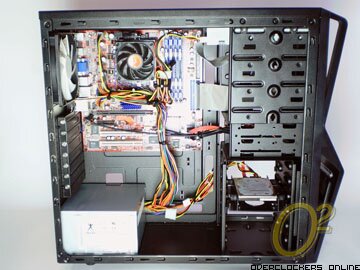 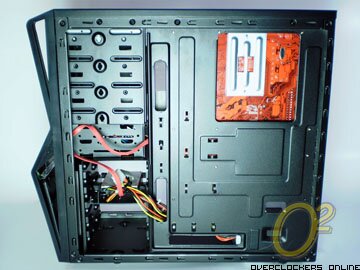 Any system can look attractive and install nicely, but the flip side to that coin is that any system can be absolutely crippled if the chassis doesn't perform to the necessary cooling levels.

The following system configuration will be used to test the Gamma's cooling capabilities:

For the test, I will allow the system to idle for 3 hours. Temperatures will be recorded. Then, I will stress the system with two instances of SP2004 for another three hours, and recorded the temperatures again. The NZXT Gamma will be tested against the following competitors:

As a prelude, I'll give you a quick background on the other cases. The NZXT Lexa S and Cooler Master Cosmos are both attractive cases that do an excellent job at cooling, at a reasonable price. The nMedia BAV280 chassis is a home theater chassis, however, and is not focused around cooling power. What it can do, though, is show how a budget chassis like the Gamma can match up and compare to it. 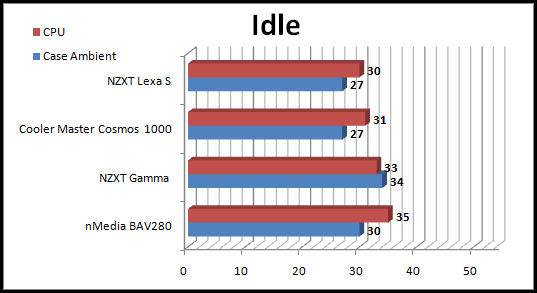 The Gamma performs decently; not coming on top, which is expected, but isn't too far behind either. The only thing that really draws my attention is the fact that the Gamma's ambient temperature is very high compared to the other chassis', which is due to the absolute lack of intake fans. When under full load, the Gamma can keep CPU temperatures at about the same as the competition. There is one good thing about only one fan; it's quiet. So utterly quiet, in fact, that I could only hear a gentle hum from all the system components with my ear a couple inches away from the side of the case.

NZXT has impressed us again, and this time on the budget level. With a hint of style, a price point of around $60 at the time of writing, supported by decent (and expandable) performance, I would recommend the Gamma to anyone looking for an affordable yet unique case.

What could make the Gamma better? Well, for starters, purchasing more fans could do wonders for the ambient temperature. This of course could cost about the same as the case, upping things up to around $120 – the price of some very decent cases as well that already have the fans installed, plus any additional features.

But when you consider the cost of this chassis, it's hard to look elsewhere. It's basic, yes, but it gets the job done and leaves plenty of room for future expansion, helping you to not not break the bank when purchasing the parts for an entirely new system, which can be very costly all together anyways.

A special thanks to NZXT for making this review possible.