Sparkle is a new face here at Overclockers Online though as a company they are anything but a newcomer. Established in 1982, Sparkle is a company focused on one product; video cards. Sparkle offers a full range of video cards with Nvidia chipsets to meet your every need.

Today I get to welcome Sparkle with one of their Geforce 9500GT cards, the SX95GT1024D2-3D. The 9500GT chipset isn't really aimed at hardcore gamers, but Sparkle has given this particular one great flexibility in a budget card. You'll see all the SX95GT1024D2-3D brings to the table as you read on.

Packaging is a white and green dominant box with a silver 'S' in the center. Also easily visible is the different connection technologies used along with some quick features on the back. 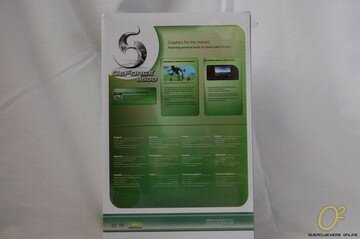 The sides give you some key features along with minimum system requirements and a short description of Sparkle's own install app called SmartInstall.

Since Sparkle does have several different 9500GT cards, you have to go to the top of the box to get the specific model that is enclosed. Since SX95GT1024D2-3D is quite the mouthful, I'll just use SX95GT from here on out. 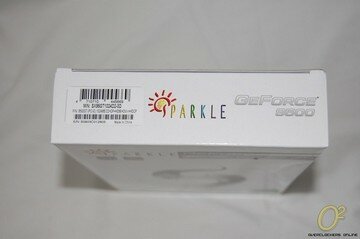 Inside the card is protected inside a protective antistatic bag wrapped inside some bubble wrap. Since the card is pretty light and relatively small this should be ample protection. 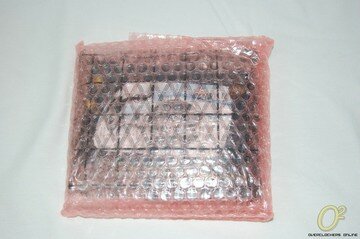 Included is a quick start guide, installation CD and a SPDIF cable. Seems these SPDIF cables are somewhat hard to find so it's very nice of Sparkle to include one especially if you plan to use the card in a HTPC setup. 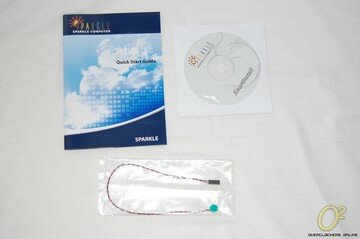 For specifications and features I grabbed them straight from Sparkle's product page here. 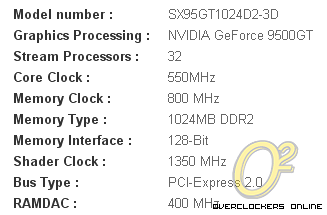 Here we get our first clear look at the SX95GT. As you can see the heatsink has a white plastic covering over the top with the Sparkle logo and the silver 'S' we saw on the packaging. The one connection of note is the SPDIF plug for running audio through the 9500GT chipset. 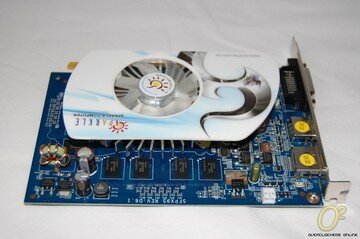 No external power is required as the PCI Express bus supplies ample power. Sparkle gives you DVI, HDMI and Display Port as your connection choices. 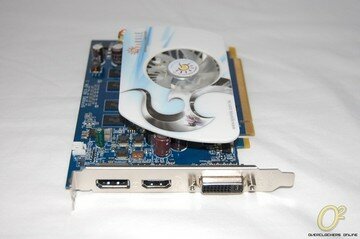 Nothing really to note on the bottom aside from the product sticker and the four screws that hold the heatsink on.

With the heatsink removed the TIM used was extremely hard and I had to scrape it away using a razor blade as simple alcohol wouldn't work. When putting back together I used Shin Etsu thermal material. Underneath the heatsink is of course the chipset. The heatsink was pretty flat and made good contact with the chipset. 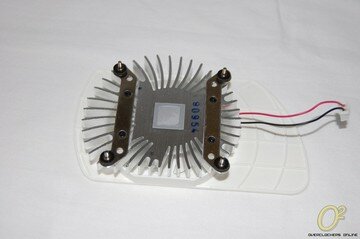 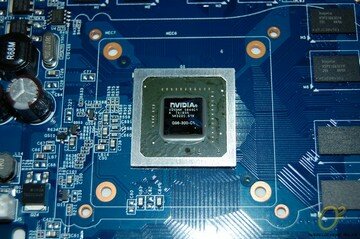 I won't bore you with installation but the SX95GT is a single slot solution so you won't lose any nearby slots. This card surely won't have any issues in any system due to its size.

Now of course we wander towards overclocking whenever a new product comes along so the first step was to check out the memory that is used. A quick search for H5PS1G63EFR, brought us to Hynix's website here. After a bit of digging I found that the memory is actually rated at 500Mhz which gave me some hope since it was running at just 400Mhz stock.

After learning of the memory speed I loaded up Rivatuner to see what extra performance I could squeeze out of the SX95GT. With stock settings at 550/1350/400 (core clock, shader clock and memory), I was able to coax it up to 560/1374/460. I was a bit disappointed at the results, but hey it is a budget card so we can't expect a lot. Max temps under load at stock settings was 56C and this did not change with the overclock I got. So now that is out of the way, let's do some testing.

I grabbed the latest drivers for the SX95GT from Nvidia's website. While a better comparison would be an 8500GT or 8600GT, I only have a 9600GT for comparison today. All benchmarks were run a minimum of three times with scores being the average of those three runs. For efficiency's sake I am going to quote a bit from previous testing.

First out of the gate is the suite of 3DMark benchmarks, while a synthetic benchmark they are widely considered the standard. Synthetic benchmarks don't necessarily translate to real world performance, but give us a good comparison between cards with a standard scoring system. 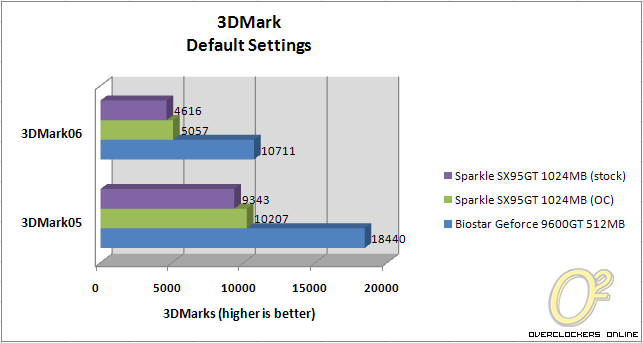 While I certainly wasn't expecting the SX95GT to come close to the 9600GT, I was surprised at the gains from the overclock.

The second benchmark I looked at was Cinebench's OpenGL Standard Test. Cinebench is a real-world suite that assesses your computers performance using Maxon's Cinema 4D software. Cinebench runs two tests but we're only interested in the second one:

The second test measures graphics card performance and is run inside the 3D editor window. The project file used can test all graphics cards that support the OpenGL standard. In this scene, only the camera was animated. This scene places medium to low demands on graphics cards and tests the maximum speed with which the scene can be properly displayed.

As you can see in Cinebench the SX95GT is not far off of the Biostar 9600GT. Gains here are quite minimal with the overclocked settings. 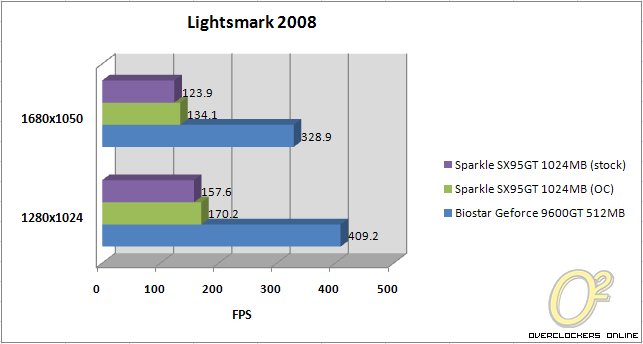 Once again we see some fairly decent gains from the overclocking, but the SX95GT still lags behind its bigger brother the 9600GT.

Games are a big factor in many consumers' purchasing decisions. As I mentioned before the 9500GT chipset isn't necessarily geared towards hardcore gamers but that doesn't mean it can't play games.

The first game up is Half Life 2: Lost Coast. I expect respectable numbers from the SX95GT as the Half Life 2 engine is one of those rare games that scales well with almost any hardware. Settings were all set to their highest with 6x MSAA and 8x Anisotropic filtering. 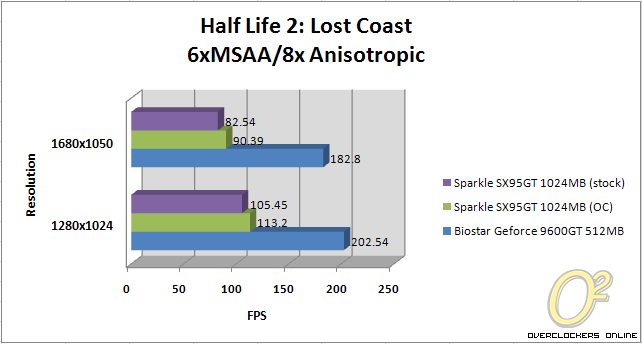 Very playable frame rates here and the SX95GT did not disappoint in giving some respectable numbers.

Next we will hit a slightly more demanding game, World in Conflict. World in Conflict is a very demanding real time strategy game that takes a good bit of power to play smoothly at high settings. Using the built in benchmark, I set everything to very high and let it rip.

As you can see the SX95GT really takes a hit in World in Conflict as it is not even playable at high settings. Gains are minimal with the overclock.

The final test will be with Crysis. Crysis obviously needs no introduction as a system killer even today when it comes to performance. All settings were set to high and the built in GPU benchmark was used.

Results here are pretty much what I expected as Crysis just hammers cards and the 9500GT chipset just really isn't up to the task.

I usually don't go into budget card reviews expecting a whole lot but I usually come out surprised. The SX95GT doesn't give you barn burning performance but it provides decent playability coupled with a bevy of connection choices; HDMI, Display Port and DVI. Sparkle is even generous enough to include the hard to find SPDIF cable for any HTPC aficionados.

It's really hard to find any real faults with the SX95GT1024d2-3D since it really isn't aimed at hardcore gamers you can't ding it too much for the performance in more demanding games. If you're a casual gamer or maybe looking to watch movies on your big screen, Sparkle's SX95GT1024d2-3D will certainly keep you happy.

Overclockers Online would like to thank Sparkle for supplying the SX95GT1024D2-3D for review.