Solid state drives are the latest in hard drive technology based on NAND flash memory. A few years back we mainly consider them for digital cameras, camcorders, MP3 players and the like. They started gaining popularity with their use inside many netbooks and now they are becoming standard hardware with enthusiasts.

The Patriot Memory Torqx is their latest SSD offering, it provides fast, quiet and reliable performance for your data storage needs. The 64GB model we have today offers slightly slower performance than its bigger 128GB and 256GB brothers but at the same time it comes at a much more affordable price point.

Partiot Memory has differentiated itself from many of the other solid state drive providers that I've been working with, and in a good way. Partiot Memory has included a 3.5′ bracket for mounting in desktop computers, something I haven't seen from the folks at OCZ or G.Skill. The Torqx packaging clearly shows the capacity of the drive through the cut out window. A great idea as it means they don't need to print different boxes for different sized drives. The back of the package lists some of the features included with the Torqx and Patriot Memory points out the 2 year warranty provided with their drive. Overall, the package is as small and compact as it can get with the 3.5′ bracket and without sacrificing any protection for the drive. 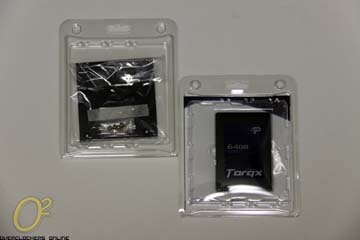 Included with the hard drive is a jumper connector for firmware flashing. There is also a total of eight screws, four to mount the Torqx to the bracket and another 4 to mount the bracket to your case. 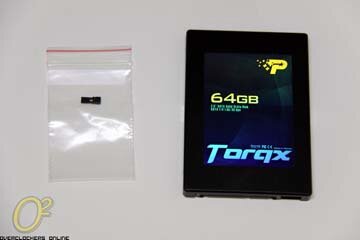 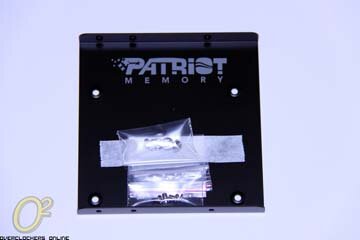 The bottom of the Torqx is plain brushed aluminum. The model and serial number along with assembly location is etched onto the plate. To further protect the finished bottom from scratches a protective film was adhered during assembly. A very nice touch and one that is fairly hard to see if you just glanced over the drive. 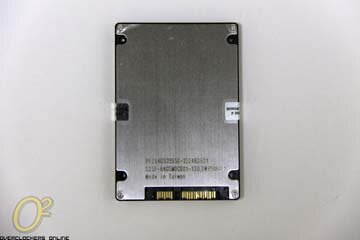 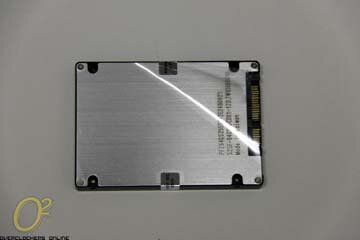 Heading over to Patriot Memory's website, we are directed to a common page for the Torqx drives with individual links based on the drive capacity, in my case I have the 64GB Torqx.

Here are the key features:

There's a good 40MB/s drop in sequential performance with the 64GB drive compared to the 128GB and 256GB. There's no mention of random read/write performance which is what hampered JMicron-based drives many original early SSD adopters were plagued with.

What solved the slow performance of original JMicron drives was addition of 64MB cache. With the Torqx, that is provided by an ELPIDA S51321CBH-6DTT-F 64MB SDRAM chip. The onboard cache will dramatically improve read and write commands. The controller as we already probably know is the Indilinx Arm chip. 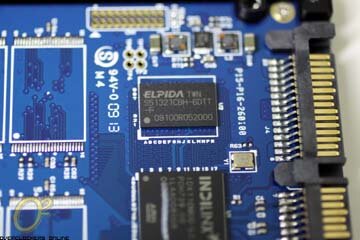 Providing the storage itself is an array of Samsung NAND flash memory modules. Eight modules have been installed and the board is capable of a total of 16. 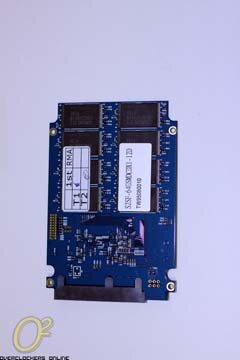 With the included 3.5′ mounting bracket, you have the option of installing the Torqx in your laptop/netbook or securely installing it in your chassis for desktop use. Both options will use the same SATA interface on the drive.

If you intend on using the 3.5′ bracket, the mounting screws are provided. The Torqx is secured to the bracket from the bottom and the bracket slides into your chassis' typical 3.5′ drive bay. 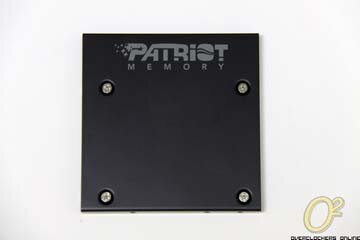 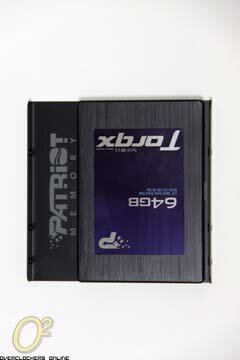 I compared the power consumption of the Torqx to a few other SSDs and a conventional 500GB Seagate hard drive. With no surprise, the SSDs are a few watts below the conventional hard drive. It also appears that the Indilinx controller requires a few more watts than the original JMicron controller but the Torqx shows no difference between the OCZ and G.Skill Indilinx based drives.

I will be testing the patriot memory torqxon my test bed as the primary drive with the OS installed on it. Here's my system specification:

The Torqx goes toe to toe with the other Indilinx SSDs and for the most part comes out on top with every transfer size. The ‘full’ Torqx is able to maintain speeds above the already aged G.Skill JMicron SSD and mechanical Seagate SSD. However, we do see a drop in speed compared to an empty or new drive. 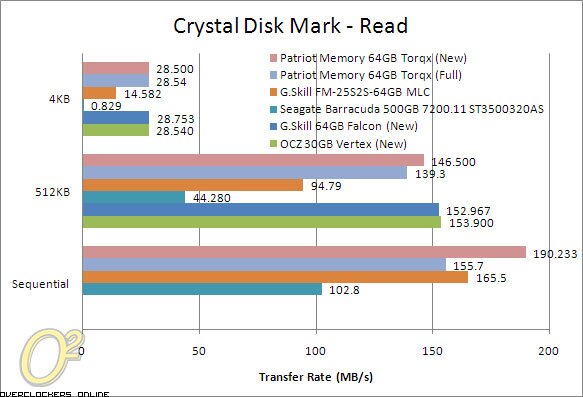 A similar story is painted with Crystal Disk Mark. The random 4KB and 512KB performance results for both read and write are a small step behind the OCZ and G.Skill Indilinx. Do note that I modified the testing parameters for Crystal Disk Mark for the Torqx and changed the file size from 100MB to 500MB. With this I was able to a better average number and actually pulled a sequential read rate.

There's nothing fancy to DiskBench, I commonly use it to see how long it takes to copy a file from one source to another. Seeing as this is a hard drive review, I'm going to use the ‘Create File’ feature and determine the speed at which the hard drive is able to create a 200MB file consisting of 100 2MB blocks. 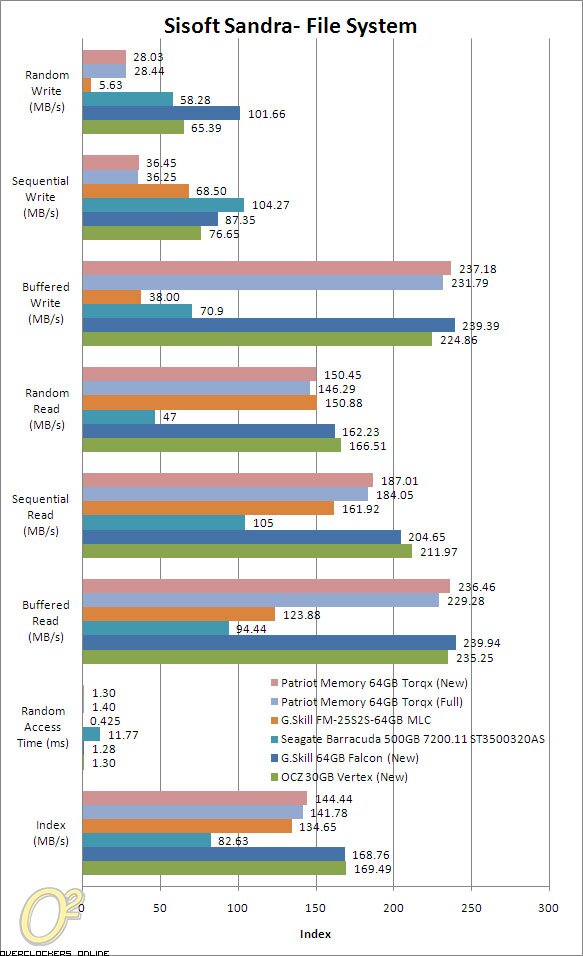 For the first time we actually see the Torqx take a hit when in performance. The Random Write is a full 70MB/s slower than its G.Skill counterpart. The sequential write is also only a third of its Indilinx counterparts.

We can see that the Indilinx drives are remarkably similar, the full Torqx comes in at the same index speed as a brand new 30GB OCZ Vertex! 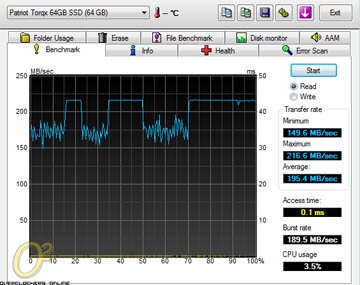 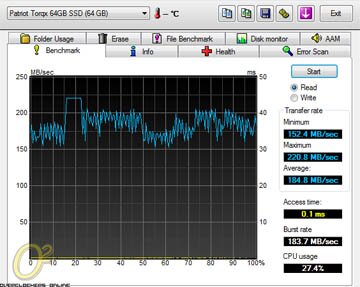 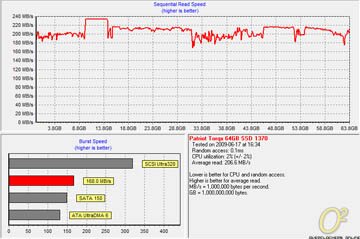 Again the numbers are similar but this time we don't see a significant jump in CPU utilization.

IOMeter is the latest addition to my hard drive benchmarking suite. The software is highly customizable and what I'm doing only scratches the surface of its capability. I added IOMeter because of flaws in the original solid state drives on the market. After completing all the benchmarks on my first JMicron SSD, I popped it into my laptop and made it my day-to-day drive. I found over time that the performance became really sluggish. At first, MSN messages would take longer to appear and videos would stutter. After some digging on the net, it turned out to be a problem with the random write performance. More information on the issue at hand can be found at AnandTech.

Our random read and write times at 4KB blocks are significantly higher than the mechanical drive and JMicron SSD but we don't quite reach the performance level of the OCZ or G.Skill Indilinx controller. 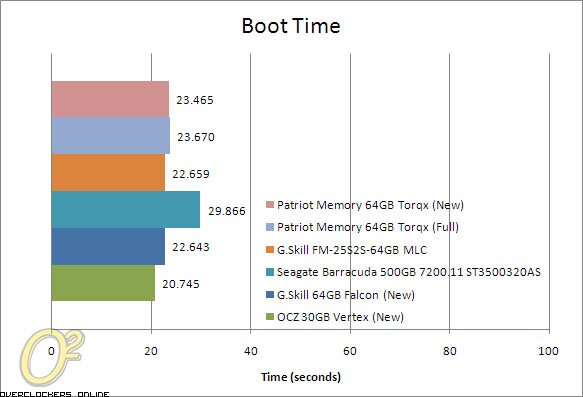 With slightly slower random read and write performance, it is only expected for the boot time to be a touch slower than the competition.

Patriot Memory doesn't have too many solid state drives on the market but when they decide to release one, you can bet they go for performance. You don't see them with wimpy JMicron controllers inside. It's the best bang for your buck or nothing at all. With recently added 10 year warranty, you know the Torqx will be a great pick over the competition.

While some of the numbers point to a slightly slower drive than say the G.Skill Falcon or OCZ Vertex, it's not by a significant margin. Anyone jumping from a mechanical drive or an older JMicron controller drive will definitely notice an improvement. As small of a detail as it may be, one of the nice touches that Patriot Memory has done is include a 3.5′ bracket. Let's face it, many of us are going to buy an SSD and install it on our desktop PCs. I would happily pay a few extra dollars to secure my investment firmly in my case than have it slide around or hang off the SATA cables!

I'd like to thank Patriot Memory for making this review possible.