From the enormous selection and combinations of processors, motherboards, memory and video cards available, storage performance is easily brushed aside. While high end storage products are not foreign to consumer systems, often for most users the most appropriate solutions are either high speed hard drives, basic RAID arrays, or the combination of the two. The question is then: why are we taking the time today to review RAID cards?

We can rationalize the thousands upon thousands of bytes in more manageable and understandable forms such as the number of songs, pictures, or videos a disk drive can hold. However, no matter how we numerically struggle to fathom the sheer amount of digital data that we can fit on a single hard disk, what we can logically pile away trumps sensibility. From megabytes, to gigabytes, and now, on the fringes of the terabytes, storage technology continually conquers new milestones with no end in sight.

In recent times, a few interesting things have happened and have shaken up the storage playing field. On the hardware side of things, not only has the cost of storage continually become cheaper (as always), but for the first time in years hard drive technology is really changing. Not too long ago, solid state drives or SSD's entered the market. While not perfect, each consecutive product improved upon the last considerably. While not the most effective cost per GB solution, it did offer the jaw dropping speeds typically found in more expensive RAID setups. For sheer capacity, conventional mechanical hard drives offer all the gigabytes and even a few terabytes to satisfy even the most persistent hoarders. Digital content has never been so plentiful, whether through various digital media services, shared content or even home produced media such as audio, video and picture there is plenty of content that needs storing that just isn't going to fit in your mom and dad's conventional 80GB hard drives. Whether users are looking to boost system performance, capacity or redundancy for data, RAID is an obvious choice.

At one time or another, all computer users have or will face data loss whether it is simply losing a bookmark, erasing a part of a document, misplacing a USB device or something catastrophic such a hard disk failure. As we rely more and more on these devices to host our day to day computing applications, store memories or entertainment, the threat- or rather the seriousness of losing a disk is increasingly severe, thus more and more users are looking towards storage redundancy. Still however, why hardware RAID? Hardware RAID is expensive, besides the obvious cost of additional hard drives, RAID cards cost quite a bit. For simple RAID solutions, software RAID solutions is quite sufficient, however when we increase the number of drives in an array, perhaps it is time to look into hardware solutions. 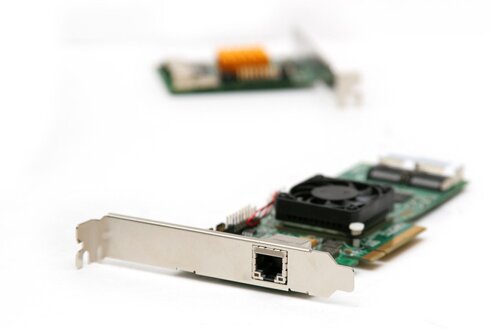 Around enthusiast circles, hardware RAID and manufacturers of such products do not often find themselves sharing the spotlight with more typical performance hardware such as video cards and motherboards, but the game has changed and we are excited to welcome HighPoint to our site. HighPoint although probably an unfamiliar name for quite a number of people, has been producing RAID solutions for a decade and a half. Among their extensive list of customers are companies such as Google, Adaptec, SunMicro, Maxtor, Hitachi, San Disk, HP and Lenovo- without a doubt, an impressive track record. Today we will be looking at two RAID solutions by HighPoint, the Rocket RAID 2680 and Rocket RAID 4320.