The following specifications and features were taken from the Lite-On . 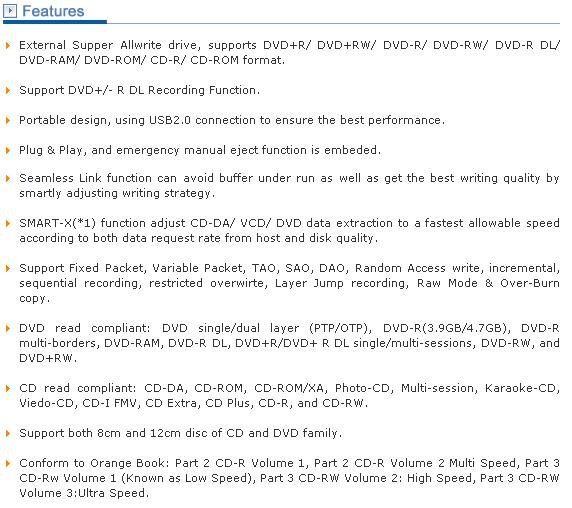 Lite-On introduces EZ-DUB, a patented new feature, making copying easier and more hassle-free for users than ever before.

The EZ-DUB function works with the addition of two buttons to the DVD writer : "DUB" and "FILE", and the user-friendly EZ-DUB software developed by Lite-On.

EZ-DUB allows you to copy discs in three simple steps :

1. Insert the original CD/DVD
2. Press the "DUB" button
3. Replace the disc with a blank disc to record when prompted


EZ-DUB allows you to backup data in three simple steps :

1. Drag files to the EZ-DUB folder on the desktop
2. Insert a blank disc
3. Press the "FILE" button


EZ-DUB is as easy as 1-2-3. All you need to know is how to press a button !
This drive appears to be the USB version of their DH-20A4H drive, with many identical specifications. It supports both DVD-R and +R, and states it can write to speeds up to 20X. Although writing at a speed as fast as 20X would mean more errors, a 4GB DVD can be burnt in 5 minutes!

Now let's move onto the product.